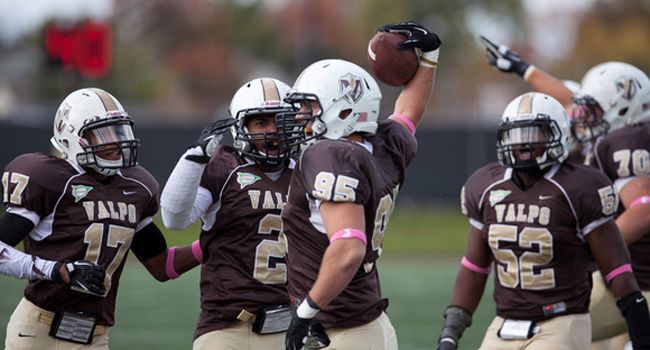 The Valpo defense assembled its best game of the season Saturday at Drake Stadium, but the Bulldogs (4-4, 3-2 PFL) labored for a 23-10 victory over the Crusaders on a blustery afternoon in Des Moines, Iowa.

"Our defense played their hearts out today. Unfortunately, we again didn't execute offensively when we needed to," head coach Dale Carlson said.

The Bulldogs controlled the ball for the majority of the first quarter as they ran 23 plays in over ten minutes of possession. The Crusader defense did a remarkable job keeping Drake's offense in check. Drake marched down to the Valpo 9-yard line on its opening drive where the Bulldogs opted to go for it on a 4th-and-1. Andy Rice held it on a quarterback keep, but was stuffed by linebackers Alex Green (Zionsville, Ind./Zionsville Community) and Patrick Derbak (Schaumburg, Ill./Schaumburg).

After a three-and-out that took less than a minute off the clock, the Bulldog offense was right back on the field with advantageous field position.

Beginning on Valpo's 39, Rice capped off a nine-play drive with an 18-yard pass to Eric Saubert in the end zone. Drake took the lead 7-0 with 5:10 remaining in the first quarter. At that point, Drake had run 20 offensive plays compared to three by Valparaiso.

The seven-point Drake lead didn't last long as Jacob Newman (Lawrenceburg, Ind./Lawrenceburg) split the uprights with a 38-yard field goal. The big play of the scoring drive came on a bubble screen from quarterback Eric Hoffman (Manitowoc, Wis./Lincoln) to Denzell Conway (New Orleans, La./MICDS [Mo.]). Conway broke free along the Drake sideline for a 29-yard gain on a 3rd and 6. Newman's second field goal of the season made it a 7-3 game with a minute to play in the first stanza.

Green finished the first quarter with seven tackles on defense.

Drake appeared poised to regain its seven point lead early in the second quarter when Ben Tesson lined up for a 35-yard field goal. However, the Crusaders' special teams made a significant push as Dale Cook (Lake in the Hills, Ill./Jacobs [South Dakota State]) got a hand on the kick, batting it short.

The score stayed 7-3 at the half. All three of the Bulldogs' drives in the second quarter stalled at midfield or in Valpo territory. A testament to the Crusader defense is the fact that Drake held the ball for 19:44 in the first half of play, but had only one score to show for it.

Both offenses emerged in the fourth quarter. Valpo took a 10-7 lead on the longest play from scrimmage of the day. Hoffman led Tony Taibi (Arlington Heights, Ill./Rolling Meadows) for a 73-yard touchdown pass with 11 minutes to go in the game. Taibi broke a shoestring tackle attempt to give the Crusaders their first fourth-quarter lead since they defeated Campbell on September 28th.

On the ensuing Drake possession, the Bulldogs were forced to punt near midfield. Cam Bohnert booted the ball high into the wind, which gave their special teams plenty of time to get downfield and down it at the Valpo 1.

With their heels on the goal line, the Crusaders managed to gain just a yard before forcing to punt. The snap short-hopped Josh Young (Lemont, Ill./Lemont) in the endzone, who fielded the ball and punted it out-of-bounds to the Valpo 19-yard line.

After a touchback on the ensuing kickoff, Valpo opened up shop on its 25-yard line. An incompletion and a five-yard pass to Conway established a 3rd and 5. Hoffman stepped back and was stripped of the ball as he was being sacked. Drake's Sean Conerty smothered the fumble, giving Drake outstanding field position yet again.

The defense kept the Crusaders alive for a bit longer as it held the Bulldogs to a field goal despite starting on the Valpo 16. Bohnert's boot made it a 17-10 tilt with just under four minutes in regulation.

Grayson Bastin (Fort Wayne, Ind./Homestead) returned the following kickoff to the 20-yard line, meaning the Brown and Gold would have to navigate 80 yards to tie the game.

Their hopes were short-lived as Matt Acree forced another Hoffman fumble, this one on the first play of the drive. Wilkins added an insurance score for Drake to give the home team a 23-10 lead. John Guilford (Spencer, Ohio/Black River) blocked the PAT to keep it a 13-point Drake advantage.

Valpo's final drive of the afternoon ended on an interception hauled in by cornerback Brad Duwe.

Derbak and Green both recorded a game-high 12 tackles apiece.

The Crusaders converted only twice on 15 third down attempts. In contrast, Drake enjoyed a 7-for-19 afternoon on third downs, though a vast number of those came on scenarios where the Bulldogs needed just a few feet.

The Bulldogs also ran away with the time of possession battle as they held the ball for 36:26.