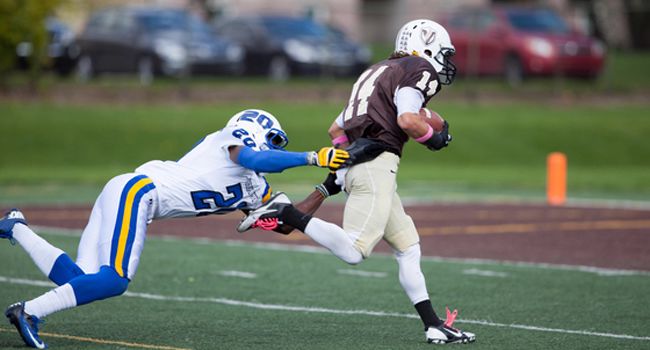 This Week in Crusader Football: After a hard-fought battle in Des Moines, Valpo returns home to Brown Field for a showdown with first-place San Diego. The Crusaders assembled their best defensive effort of the season last Saturday against Drake, but the Bulldogs prevailed 23-10 thanks to 16 fourth-quarter points. The Toreros enter Saturday winners in four of their last five contests. Their lone loss in the PFL came at the hands of the Dayton Flyers, who knocked off USD 45-38 in double overtime. Today is also Military Appreciation Day at Brown Field.

Head Coach Dale Carlson: Dale Carlson is 3-38 in his fourth season with the Crusaders, and 113-141-3 overall in his 25th season as a collegiate head coach.  He arrived at Valpo from Ohio Dominican where he started the Panther program from scratch in 2004, just as he did at Tri-State University prior to his tenure with Ohio Dominican. He is the 16th head coach in Valpo history, and just the seventh since 1946.

All-Time Series: San Diego leads the all-time series 15-5 over Valpo including nine consecutive wins. The two teams have faced each other every year since 1993. The Crusaders’ last win over the Toreros came on Oct. 18th, 2003. San Diego defeated the Brown and Gold 51-14 last September in Southern California.

Scouting San Diego: The Toreros enter Saturday’s game in a four-way tie for first place in the PFL standings. San Diego touts one of the most high-powered offenses in the league. At 36.6 points per game, the Torero offense is scoring more often than every team except Jacksonville and Mercer. Senior quarterback Mason Mills is enjoying an MVP-caliber season, having already thrown for 24 touchdowns and just five interceptions. His 2,568 passing yards lead the PFL by a margin of nearly 400 yards. Junior receiver Reggie Bell has been the main benificiary of Mills’ outstanding play. Bell is atop the league leaderboard in receiving yards per game with 101.5. San Diego operates under a two-running back system, a strategy that has paid heavy dividends for the Toreros. Both Joe Ferguson and Kenn James have amassed 500+ yards on the ground thus far.  Dale Lindsay is 5-3 in his first season as head coach. He served as an assistant coach at New Mexico State University before returning to San Diego. Lindsay also has professional coaching experience under his belt. He spent the 2002-03 season as defensive coordinator of the San Diego Chargers before working from 2004-06 with the Washington Redskins. Lindsay played linebacker for the Cleveland Browns from 1965-73. Middle linebacker Zach Devaney guides the San Diego defense. The senior has 62 tackles (6.5 for a loss) for a defensive unit that is allowing an average of 27.5 points/game. Sophomore kicker David Last is a perfect 9-for-9 on field goals in 2013. Last’s season long is 38 yards.

Week in Review: Valpo suffered a 23-10 loss to Drake last week in Des Moines, Iowa. The Crusaders led the Bulldogs 10-7 in the fourth quarter, but Drake capitalized on outstanding field position and a pair of Eric Hoffman fumbles. The scoreboard told only half the story as the defense held its ground on numerous Bulldog drives that started on the wrong side of the 50-yard line. The Bulldog defense did a fine job shutting down Valpo’s rushing game as the Crusaders accumulated just four rushing yards. Hoffman threw for 179 yards, 73 of those coming on the touchdown pass to Tony Taibi. Senior Pat Derbak and sophomore Alex Green both recorded a dozen tackles each in the defeat. Derbak also added a sack to his stat sheet.

Record Watch: Quarterback Eric Hoffman owns the school record for most career passing completions with 615. Scott Lange’s 600 completions now ranks second. Hoffman is currently 401 passing yards behind Lange for 2nd all-time in Valpo history.  At 1,004, the redshirt junior is 177  in back of Lange for most attempts in a career. Hoffman needs 329 yards of total offense Saturday to surpass Nick Browder for second all-time in that category.

Throw It Around: Five different receivers have registered at least 16 receptions so far in 2013. With Gladney sidelined, Cassara and Kuramata have been serving as Hoffman’s top two targets. Tony Taibi and Steve O’Bryant are also playing a more prominent role in the Crusader offense.

Sack Streak: After a strong second half in 2012, sophomore John Guilford is picking up right where he left off. The defensive end has notched a sack in each of the last five tilts. His six sacks on the season are a team-high. Guilford has also recorded 24 tackles the last four weeks including ten at Marist on Oct. 5th.