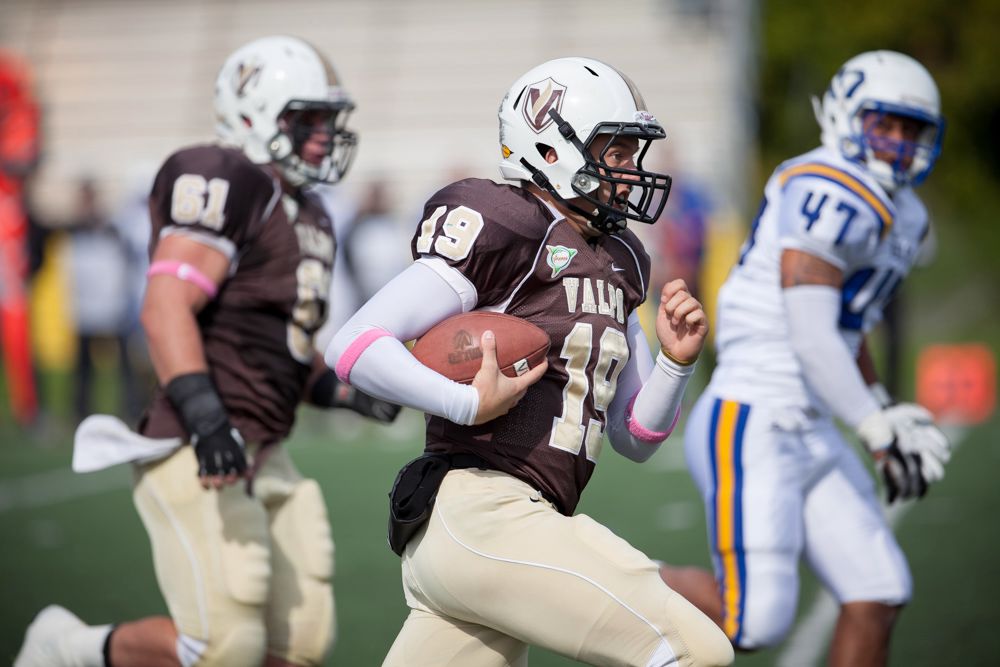 Eric Hoffman (Manitowoc, Wis./Lincoln) and Tony Taibi (Arlington Heights, Ill./Rolling Meadows) teamed up for an 86-yard touchdown pass for the second straight week, but it wasn't enough as the Butler Bulldogs handed the Brown and Gold a 72-12 loss Saturday at the Butler Bowl.

The Crusader scoring play represented the sixth time this season that Valpo put points on the scoreboard first.

Butler answered right back though. Just 40 seconds later, running back Trae Heeter broke loose for a 58-yard touchdown run on the second play of the ensuing drive. Jon Treloar's extra point gave the Bulldogs the lead 7-6 with 7:50 to play in the first quarter.

Bulldog receiver Brendan Shannon hauled in a Matt Lancaster pass near the Valpo 20. Shannon pinballed off a pair of Crusader defenders, but managed to stay on his feet as he completed the 35-yard touchdown pass. Butler led 14-6.

The Butler defense forced a Crusader three-and-out on the following series.

Beginning their next drive near midfield, the Bulldogs wasted no time padding their lead. On the first play from scrimmage, Lancaster fired his second touchdown pass of the quarter, a 57-yard toss to make it 21-6.

Treloar added a 34-yard field goal early in the second quarter to extend Butler's advantage to 24-6.

With five minutes to play in the half, Hoffman floated a pass towards the sidelines on a 2nd and 10 that was intercepted and returned all the way for a defensive score.

Valpo did score a touchdown just before the end of the second quarter. With Ben Lehman (Elgin, Ill./Saint Edward Central Catholic) inserted at quarterback, the Crusaders assembled a 14-play, 76-yard drive capped off by a 5-yard rushing touchdown from Brandon Hall (Muskegon, Mich./Orchard View). The PAT sailed wide right, keeping it a 38-12 game with 58 seconds remaining.

Butler wasn't done just yet. On the first play of the drive, Lancaster tallied his fourth touchdown pass of the half with an 86-yard throw to Heeter. The halftime score read 45-12.

The Crusader defense allowed three touchdowns on either the first or second play of a drive in the calamitous first half.

Butler tacked on 27 points in the second half to beat the Brown and Gold 72-12.

Valparaiso (1-9, 1-6 PFL) will close out its season next Saturday at Brown Field. The Dayton Flyers come to town for a 1:00 pm kickoff on Senior Day.