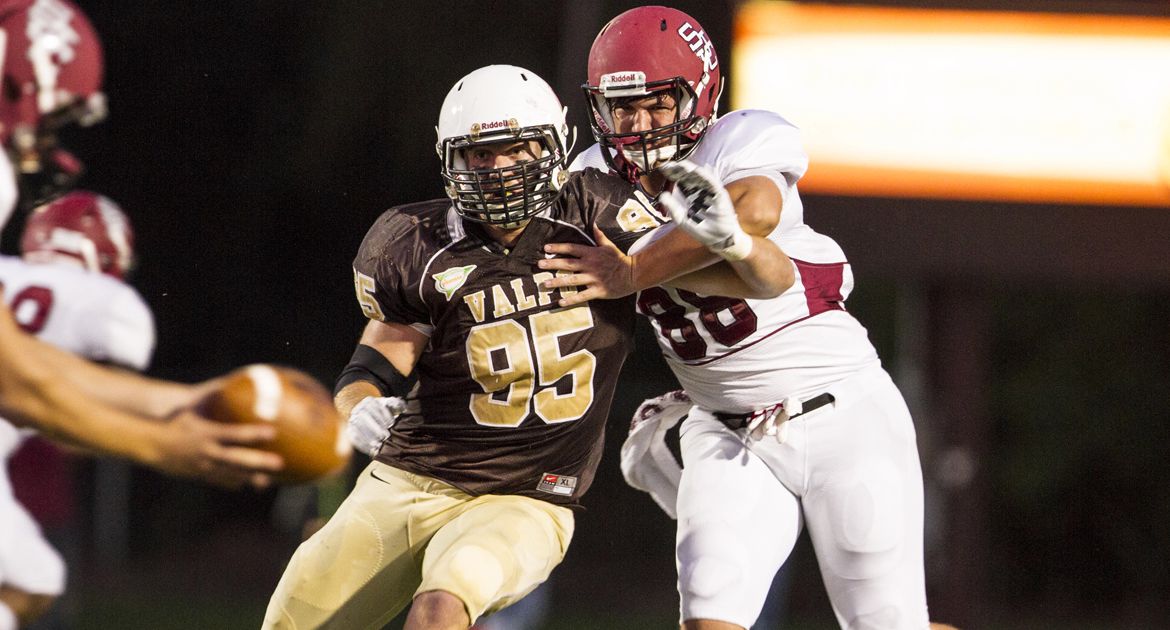 The visiting Pumas won the coin toss before electing to receive the opening kickoff.

A false start penalty knocked the wind out of the sails of St. Joe's opening drive. The Pumas had navigated into Crusader territory following a trio of significant rushing gains, but the drive stalled at the Crusader 48-yard line.

In the midst of Valpo's ensuing drive, the Pumas were whistled for defensive pass interference on a 3rd and 12 that prolonged the home team's surge. The Brown and Gold converted a pair of key 4th down conversions to penetrate into the red zone before they faced a 4th and goal from the St. Joe's 3-yard line. Head coach Dave Cecchini opted to put the Crusaders on the scoreboard first, and Jacob Newman (Lawrenceburg, Ind./Lawrenceburg) obliged with a 20-yard field goal that capped a 19-play, 80-yard drive that gave Valpo a 3-0 lead with 4:16 to play in the first quarter. The Crusader possession ate over eight minutes of clock.

St. Joseph's erased the deficit at the end of the first quarter with a 4-play, 73-yard scoring drive. Mike Anderson broke loose for a 47-yard TD scamper, and a Gavin Voss extra-point gave the Pumas a 7-3 lead with 47 seconds left in the opening quarter.

Following their tedious first quarter scoring drive, the Crusaders were unable to whip up a drive that eclipsed two minutes the rest of the first half.

The Pumas made it a two-touchdown game in the final seconds of the first half. Voss nailed a 46-yarder that put St. Joseph's on top 17-3 as the teams went into the break.

Despite committing four fewer penalties than Saint Joseph's through the first 30 minutes, Valpo was outrushed by a margin of 166-41.

St. Joseph's added a touchdown on its first drive of the second half before the Crusaders managed to get into the end zone.

Puma running back Braxton Shelton recorded four of his game-high 159 rushing yards on a fourth-quarter TD push. Shelton averaged 6.4 yards per carry on 25 touches.  Mike Anderson logged 168 all-purpose yards on the evening: 97 yards on ten carries and five catches for 71 yards. The sophomore was in on three of his team's four touchdowns, and Saint Joseph's held on for a 31-10 victory.

Kuramata finished the night with 148 receiving yards on a career-high 14 catches. He was two receptions shy of the single-game school record of 16 set by Mike Healey in 1985. Sophomore Grayson Bastin (Fort Wayne, Ind./Homestead) led the Crusaders in rushing with 63 yards on 14 attempts. Lehman ended the night 24-of-47 for 234 yards, a touchdown and no interceptions.

Valparaiso controlled the ball for 30:29 and ran 87 plays. Despite a 6-for-20 third down conversion rate, the Crusaders were successful three times on four fourth down attempts.

The Crusaders (0-2, 0-0 PFL) enters their bye week before they travel to Liberty, Mo. to take on the William Jewell Cardinals (1-0, 0-0 GLVC) on Saturday, Sept. 20th at 1:00 pm. Links to audio and live stats will be available at ValpoAthletics.com.