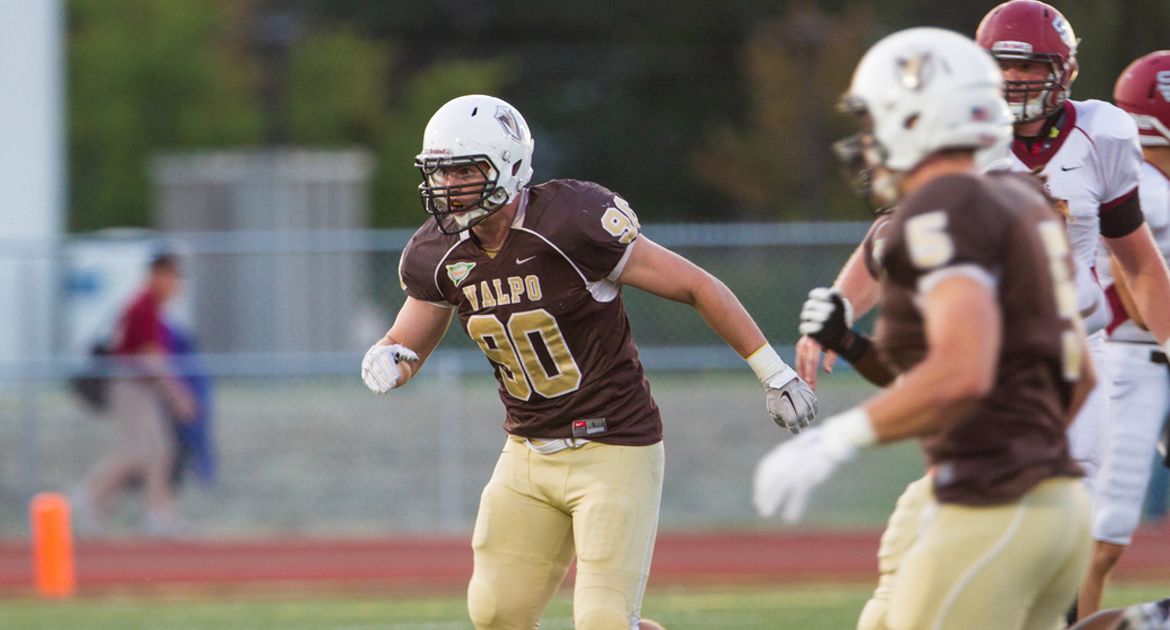 Last year, John Guilford tallied a sack, a tackle for a loss, and a fumble recovery in the Crusaders' 49-42 overtime win over Campbell. The Camels host Valpo this Saturday at 6 pm ET/5 pm CT.
Valparaiso at Campbell | September 27, 2014
Related Links
Related Links

This Week in Crusader Football: Pioneer Football League play begins for the Crusaders this Saturday as they head to North Carolina to square off with Campbell. A victory by the Brown and Gold at Barker-Lane Stadium would represent back-to-back wins for the first time since Week 4 of the 2007 campaign. Valpo aims to lengthen its winning streak over the Fighting Camels to four. Meanwhile, Campbell looks to get over the hump as a vicious non-conference schedule has Mike Minter’s club in search of its first win. Coming off their bye week, the Camels will have had sixteen days to prepare for the 1-2 Crusaders.

On the Air: For the ninth straight season, the Valpo Sports Radio Network is home to all 12 Crusader football games in 2014. All 12 games can be heard live on WVUR (95.1FM, Valparaiso), online through www.valpoathletics.com. Todd Ickow will handle all the play-by-play, with Brad Collignon adding the color commentary this week. Video will be available through GoCamels.com. Live stats will also be available through www.valpoathletics.com.

Head Coach Dave Cecchini: Cecchini is 1-2 in his first year at Valparaiso. His first head coaching win came on Sept. 20th, 2014 when the Crusaders defeated William Jewell 39-30. Cecchini most recently served as offensive coordinator/quarterbacks coach at Lehigh where the Mountain Hawks captured a Patriot League Championship in 2010. His path to Valpo also included stops at Harvard and The Citadel, where he mentored QB Ryan Fitzpatrick and WR Andre Roberts to eventual professional careers. While Cecchini made a name for himself as offensive coordinator at Harvard in 2003, the Crimson compiled the fourth-best offense in the nation en route to an undefeated 10-0 season and an Ivy League Championship. Furthermore, The Citadel set 16 offensive records under his tutelage. As a receiver at Lehigh, Cecchini garnered All-American honors and established numerous single-season school and Patriot League records.

All-Time Series: Valpo leads the all-time series 4-2 over Campbell, including three straight victories. The Crusaders’ only win of 2013 came over the visiting Camels on Sept. 28th at Brown Field. In fact, before Saturday’s triumph over William Jewell, the Brown and Gold’s last three overall wins came at Campbell’s expense. Saturday represents the seventh consecutive season the Crusaders and Camels have clashed on the gridiron.

Scouting Campbell: Though Week 5 is upon us, the jury is still out on the Fighting Camels. An 0-3 record coupled with a -114 point differential suggests few positives, however Campbell assembled perhaps the toughest non-conference schedule of any PFL team. All three of CU’s opponents have been Division I scholarship programs, including an Appalachian State squad that traveled to the Big House to play Michigan one week prior to hosting Campbell. The Camels limited Charlotte to six points in the first half of their Week 1 showdown, and even led Charleston Southern 10-7 at the break in Week 3. Understandably, these massive offense lines have fatigued the Campbell defense over the course of sixty minutes, as evidenced by 75 second half points yielded.

A team on the rise, the Camels’ defensive line is one area that packs considerable more punch than it did in 2013. Dwan Hanshaw has shifted from tackle to end, making way for Greg Milhouse, a 295-pound transfer from Appalachian State. Lucas Smith, the other tackle, has added on 25 pounds since the last time he faced Valpo. Overall, Campbell’s D-line is 105 pounds heavier than a year ago.

Dakota Wolf is one of the few quarterbacks that returns experience in the PFL this season. Though Brian Hudson received the majority of time under center, Wolf appeared in seven games in 2013. He can run it as well as he can throw it, and Wolf has accounted for an average of 124.3 total yards of offense per game thus far. DeShawn Jones is listed as the starter at running back, though his stat line (20 rush, 68 yds) mirrors backup Keith Goss’s body of work (21 rush, 70 yds). Seven different Camels combined to run for 298 yards versus the Crusaders last September; however, they did put the ball on the turf three times (all recovered).

Head Coach Mike Minter: Minter is in his second season at the helm of the Campbell football program. The Cleveland, Ohio native won two national titles (1994, 1995) while at the University of Nebraska. Minter was a three-time All-Big 12 defensive player with the Cornhuskers. Fittingly, he was inducted into the Nebraska Football Hall of Fame in 2006. Minter went on to have a highly-successful NFL career that culminated in an appearance in Super Bowl XXXVII, a tilt that he accumulated a career-high 18 tackles despite breaking his foot in the 3rd quarter. His career extended 10 seasons, all with the Carolina Panthers. Minter, a safety, retired in 2007 as the franchise leader in games started (141), consecutive starts (94), and fumble recoveries and interceptions resulting in touchdowns. He also serves as Chief Executive Officer and founder of Minter Enterprises, a non-profit organization that specializes in youth development.

Kuramata Amongst the Best: Wide receiver Tanner Kuramata is 4th in NCAA Division I FCS in receptions per game with 8.7 and is 16th in receiving yards per game (98). The senior has also compiled 114.3 all-purpose yards per game, the sixth-most in the PFL and 73rd in all of Division I FCS.

Through Three Games: Valpo has lost just one fumble...Campbell has played in front of 34,969 fans...Crusader quarterbacks have been sacked just twice...Campbell has sacked opposing QBs one time...the Crusaders have been successful on 4th down as many times as they were the entire 2013 season (eight)...the Camels have allowed 800 rushing yards...the Brown and Gold have outscored opponents 45-43 in the second half...the Camels have yet to score in the opening quarter of either half...Campbell has zero rushing touchdowns.