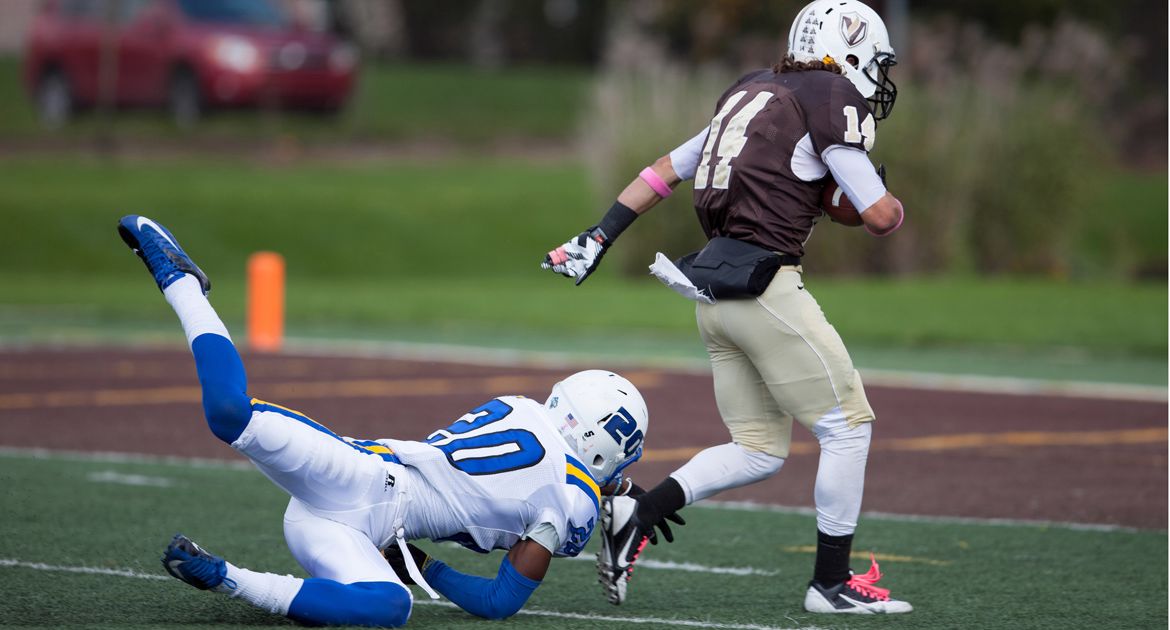 A Valparaiso team that entered Saturday's tilt 8-for-8 scoring in the red zone experienced two critical turnovers inside the opponents' 20-yard line as Valpo fell to Campbell 34-24 in front of 6,370 fans at Barker-Lane Stadium in Buies Creek, N.C.

The Crusaders and Fighting Camels fought toe-to-toe the entire first half. The two traded short field goals in the first quarter before Valpo took a 10-3 lead five minutes into the second quarter courtesy of a 69-yard passing play from Lehman to Kuramata. Kuramata caught the pass near midfield and displayed breakaway speed for his first touchdown reception of the season.

Campbell answered on its ensuing possession.

Jared Joyner broke loose for a 20-yard touchdown run to close a nine-play, 78-yard drive. Mitchell Brown's extra point brought the contest to a 10-10 score. Neither team scored the remainder of the quarter.

Valpo outgained Campbell by a razor-thin margin of 194-193 yards in the first half.

An offensive frenzy broke out in the third quarter as both teams put up points on each possession of the stanza.

A 59-yard kickoff return by Isaiah Howard gave the home team prime field position to start the second half. To the credit of the defense, the Brown and Gold held Campbell to a field goal. Brown's 30-yarder broke the tie and gave the Camels a 13-10 advantage.

The Crusaders marched right back down the field on their next possession and manufactured an 11-play, 76-yard scoring drive that climaxed with a three-yard TD scamper from Brandon Hall (Muskegon, Mich./Orchard View). Jacob Newman (Lawrenceburg, Ind./Lawrenceburg)'s extra point gave Valpo a 17-13 lead.

Down 20-17, Lehman put Valpo ahead again after he tossed a 37-yard TD pass to Cassara. Cassara deked a couple Camels and managed to stay in bounds on the sideline throw, one of several acrobatic catches made by Cassara on the day.

Wolf and the Camel offense started their next drive on their own 44. They rushed the ball all the way down to the doorstep of the Crusader red zone before Wolf completed a 9-yard out to Ben Bolling, moving Campbell to the Valpo 7. A well-executed quarterback keep gave Wolf his first touchdown rush of the season and Campbell a 27-24 advantage.

The Crusaders drove down to their opponents' 25-yard line, but a 42-yard field goal attempt from Newman came up just a couple feet short.

Lehman's second interception of the ballgame came on a 1st and goal from the 7. Cassara tracked down Luke Hill at the Valpo 23 and made, at the time, what was a touchdown-saving tackle. But the Camels padded their lead on the very first play of that drive as DeShawn Jones carried it in from 23 yards out.

Lehman & Co. were able to scurry down 44 yards to the Campbell 24-yard line, but Eric Westrbook picked off a pass attempt at the 2-yard line to seal the deal.

The numbers suggest a different story than the score. The Crusader defense limited Campbell to just 1-of-9 on third down attempts while the offense enjoyed an 8-for-16 success rate in similar situations. Furthermore, Valpo outgained the home team 533-405. However, the three aerial turnovers proved to be the difference maker.

Links to the audio, video, and live stats will be available at valpoathletics.com.