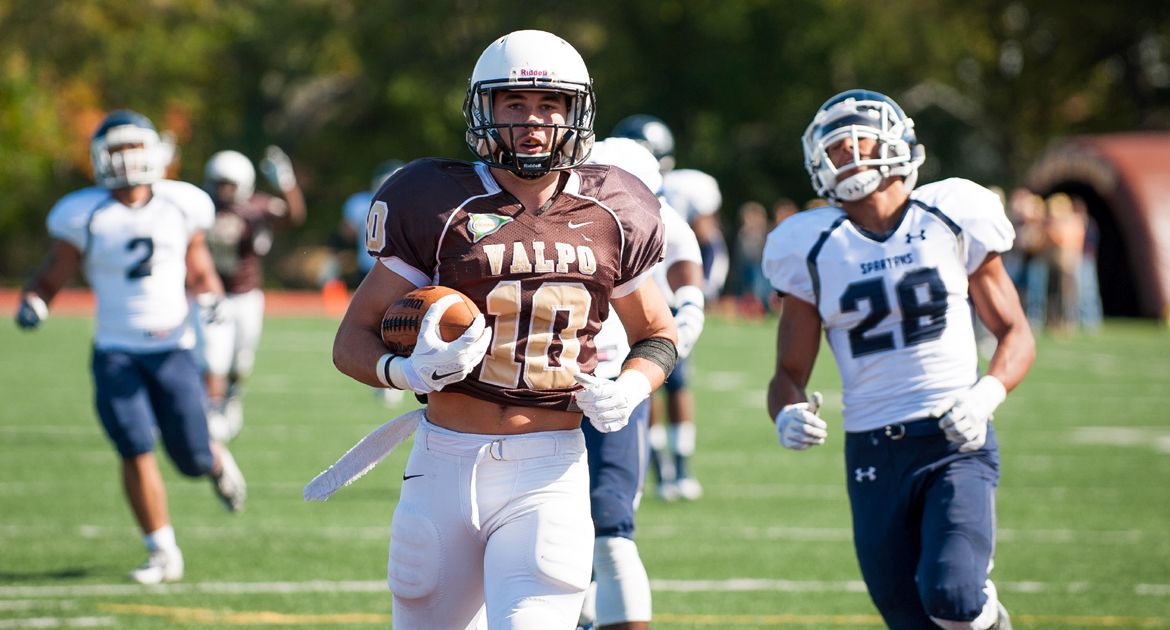 Senior Tanner Kuramata had a game-high six receptions for 69 yards, including a touchdown grab in the first quarter of Saturday's 55-7 win over Missouri Baptist. (Ian Olive)
Video 1 Video 2
Missouri Baptist at Valparaiso | October 11, 2014

The Valparaiso football team gave a packed Homecoming crowd at Brown Field Saturday afternoon quite the show, recording the highest point total by a Crusader team in over 18 years as they rolled to a 55-7 victory over Missouri Baptist.

The 55 points represented the most the Crusaders have posted in a single game since a 66-21 victory over Alma on Sept. 14, 1996.  Valpo scored 21 points in the first quarter to get off the mark strong, posted another ten in the second quarter and added 21 more points in the third quarter before capping the scoring with a field goal early in the final period.

A balanced offensive effort helped the Crusaders to Saturday’s win, as Valpo totaled 520 yards of offense – 281 on the ground and 239 through the air. Brandon Hall (Muskegon, Mich./Orchard View) led the rushing game with 12 carries for 120 yards and two scores. Ben Lehman (Elgin, Ill./St. Edward Central Catholic) went 16-for-22 with 196 yards and two touchdown passes before relinquishing quarterbacking duties to Scott Staal (Grand Haven, Mich./Grand Haven) and then Ryan Clarke (Hopatcong, N.J./Hopatcong), who both went 2-for-2 through the air.

Special teams play was also a highlight for the Crusaders on the day, including a record-tying performance from kicker Jacob Newman (Lawrenceburg, Ind./Lawrenceburg).  Newman was perfect on all seven of his PAT attempts, the fifth time in program history a kicker has hit seven PATs in one game and the first time since 2006.  Newman also matched his career long by connecting on a 38-yard field goal as well.

Meanwhile, on the punt block team, freshman Jarrett Morgan (Cooper City, Fla./Cooper City) enjoyed a career day.  Morgan blocked Missouri Baptist’s punt attempt following a three-and-out on its initial drive, forcing the Spartans to cover it up on their own six-yard line and leading to the game’s opening score, as Hall found the end zone on the very next play.  Then, midway through the third quarter, Morgan broke through the line again and tallied his second block of the day, scooping this one up himself and taking it the final 20 yards for a touchdown.

After another three-and-out for the Spartan offense, the Crusaders put together a quick five-play drive for their second touchdown, highlighted by a career-long 43-yard run by Hall.  The sophomore would score from nine yards out three plays later to make it 14-0.  But the Spartans would not lie down lightly, as Nathan Wurmb picked off an attempted screen pass from Lehman on Valpo’s next possession and returned it to the two-yard line. On the next play, JP Lowery powered home to cut the lead in half.

Not wanting to be outdone by his backfield mate, sophomore speedster Grayson Bastin (Fort Wayne, Ind./Homestead) got in on the action on the Crusaders’ next drive as he took a shovel pass 22 yards to put Valpo back in the red zone.  Following a Valpo penalty, Lehman delivered a strike to senior wideout Tanner Kuramata (Washington D.C./Friendship Collegiate Academy) for a 35-yard touchdown to cap a nine-play, 70-yard drive, which made it 21-7 late in the first quarter.

Just three plays into the second quarter, the Crusaders fired the cannon again, as Lehman hit freshman fullback Spenser Pennington (San Diego, Calif./Del Norte) with an underneath pass.  Pennington did the rest of the work, scoring from 18 yards out for his first career touchdown to push the lead to 28-7.  Newman added his 38-yard field goal, capping a 10-play, 65-yard drive to make it a 24-point game midway through the second quarter.

With 3:25 to go in the first half, Hall went over 100 yards for the day with a 14-yard burst over the right side, his first time topping the century mark this season. The Crusader offense topped 300 yards in the first half.

Valpo opened up the second half much like the first, putting together a quick-hitting scoring drive which covered 90 yards in just seven plays.  A Lehman scramble for 23 yards was the big play on the drive, which Jake Hutson (Blanchard, Mich./Montabella) finished with a 12-yard run just 2:40 into the second half.  Morgan’s second blocked punt came on the ensuing Missouri Baptist possession, making it 38-7 Crusaders.

Freshman running back Frank Catrine (Springboro, Ohio/Bishop Fenwick) joined in on the scoring action with a six-yard run to finish a four-play, 41-yard drive with 3:36 to go in the third quarter. Kicker Josh Young (Lemont, Ill./Lemont) added a 21-yard field goal straight through the uprights with 10:33 to play to cap the scoring.

Catrine ended the game with 12 carries for 67 yards, all of which came in the game’s final 20 minutes.  Kuramata led the Crusaders with six catches for 69 yards, as eight different players combined for Valpo’s 20 receptions.  The Crusaders set season-highs in offensive yards (520), rushing yards (280), points (55), first downs (25), and finished a perfect eight for eight in red zone efficiency.

The Crusader defense stood tall all game, forcing five three-and-outs on the Spartans’ first six possessions. Valpo did not allow a first down until the seven-minute mark of the second quarter.  Ryan Mundy (West Lafayette, Ind./Harrison) and Kye Hall (New Smyrna Beach, Fla./New Smyrna) led the way on defense with seven tackles apiece, as Valpo limited the Spartans to 122 total yards and eight first downs.

Adding to the Homecoming festivities, the Crusaders dedicated their brand-new track in honor of former Valpo track athlete and Illinois Track and Cross Country Coaches Association Hall of Famer Warren G. Hoger in a halftime ceremony.

Valpo (2-4, 0-2 PFL) returns to the gridiron next weekend when they Drake for a Pioneer Football League game. Kickoff is set for 1:00 pm CT with live stats, audio and video available through ValpoAthletics.com.