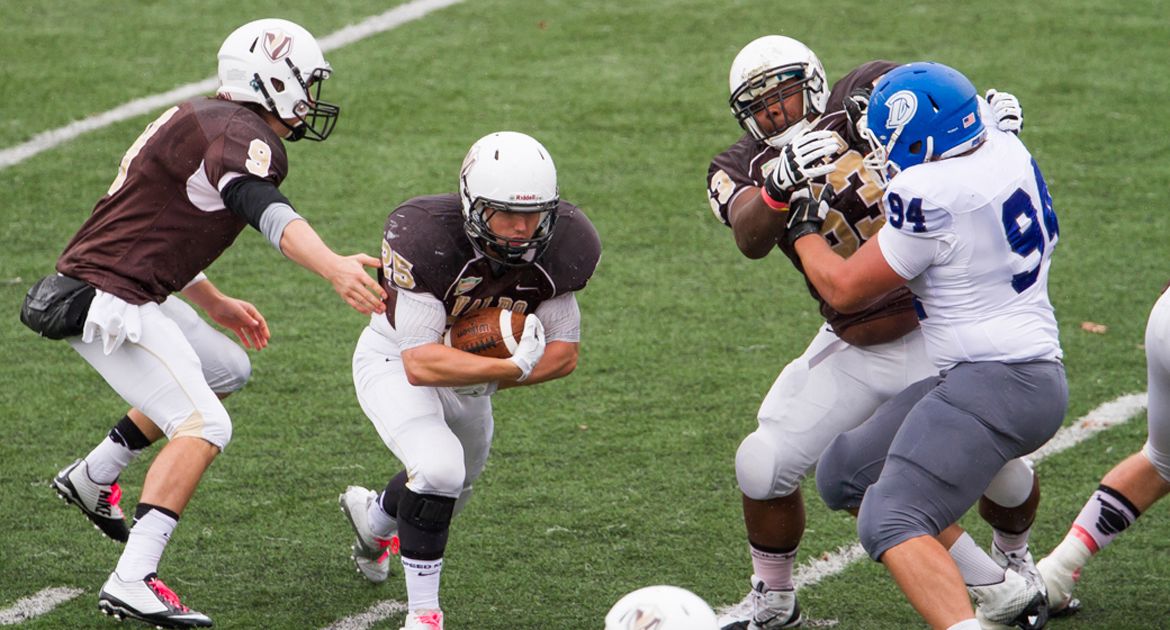 Grayson Bastin broke loose for an 8-yard carry in the first quarter - the longest on the day for the Crusaders. (Ian Olive)
Drake at Valparaiso | October 18, 2014

For the second straight season, a fourth-quarter lead over Drake escaped Valparaiso. A QB sneak and an interception returned for a touchdown gave the Bulldogs a 17-9 win Saturday at Brown Field.

Drake's (4-3, 3-1 PFL) defense entered the tilt with a deservedly impressive reputation, but it was the Crusader D that stole the show in the first half.

The Bulldogs were in the midst of a fast-paced, first quarter drive that appeared destined for points when a Conley Wilkins fumble prematurely ended the possession. Senior Devan Gadson (Orlando, Fla./Freedom) pounced on the loose ball at the Crusader 32-yard line.

The Valpo 32-yard line proved to be a black hole again for the Bulldogs on their next possession. That's the spot quarterback Andy Rice fired a stray pass into the arms of Crusader cornerback A.J. Bradley (Washington, D.C./Friendship Collegiate Academy) on a 4th and 4.

The Crusaders' second forced turnover of the afternoon swung the pendulum of momentum their way.

The Crusader defense stuffed Drake on its ensuing possession, forcing the Bulldogs to punt from their own 21-yard line. Punter Cam Bohnert couldn't handle the snap and was forced to fall on it at the 15, giving Valpo prime field position.

Lehman and Shea moved the chains with a five-yard reception on a 3rd and 4 at the 9. Running back Brandon Hall (Muskegon, Mich./Orchard View) was well on his way to a 4-yard touchdown run when a holding penalty pushed the Brown and Gold back to the 14. Four plays later, Newman nailed a 23-yard field goal to extend Valpo's lead to 9-0.

The Bulldogs had a golden opportunity to put points on the board halfway through the second quarter. Drew Ormseth returned a 33-yard Alex Kozlowski (Detroit Catholic Central) punt back to the Valpo 28-yard line. A defensive pass interference call on the second play of that drive thrust the Bulldogs down to the 10-yard line.

Tesson atoned for his mistake later in the stanza when he split the uprights on a 40-yarder with 49 seconds remaining in the half. Valparaiso took a 9-3 lead into the break.

Both teams played a scoreless third quarter. The Valpo D made a critical stop on their own 17-yard line on a 4th and 5. The Crusaders took over on downs but were unable to advance the ball past midfield.

A pair of personal foul penalties following a Kozlowski punt caused the Bulldogs to begin their game-winning touchdown drive back on their 11-yard line. Drake maneuvered 89 yards on 11 plays before Rice shoved the pile forward on a 2nd and goal from the 1. Tesson's extra-point provided the exclamation point on the possession that ate up seven minutes of clock.

Traillng 10-9 with 13:03 to play, Valpo still had plenty of time to assemble a late push. However, the Bulldog defense dug their feet in and caused three consecutive three-and-outs before a Scott Staal (Grand Haven, Mich./Grand Haven) pass was intercepted by Drew Ormseth and returned 39 yards for a touchdown. The extra point made it a 17-9 affair.

The Brown and Gold's final possession ended with a similar result: an interception in their own end. Drake's Brad Duwe picked off the errant toss at the Valpo 38 to clinch the Bulldogs' third win in PFL play.

Staal took over in the second quarter following a head injury to Lehman. His status for next Saturday's game at Morehead State has yet to be determined.

The Crusaders managed just 62 yards of total offense in the second half, advancing no farther than the Drake 49-yard line. Lehman was 7-for-12 for 68 yards and a touchdown throw as he led the passing attack. Jake Hutson (Blanchard, Mich./Montabella)'s 25 rushing yards on seven carries represented the watermark for the run game.

Links to the audio and live stats will be available at valpoathletics.com.