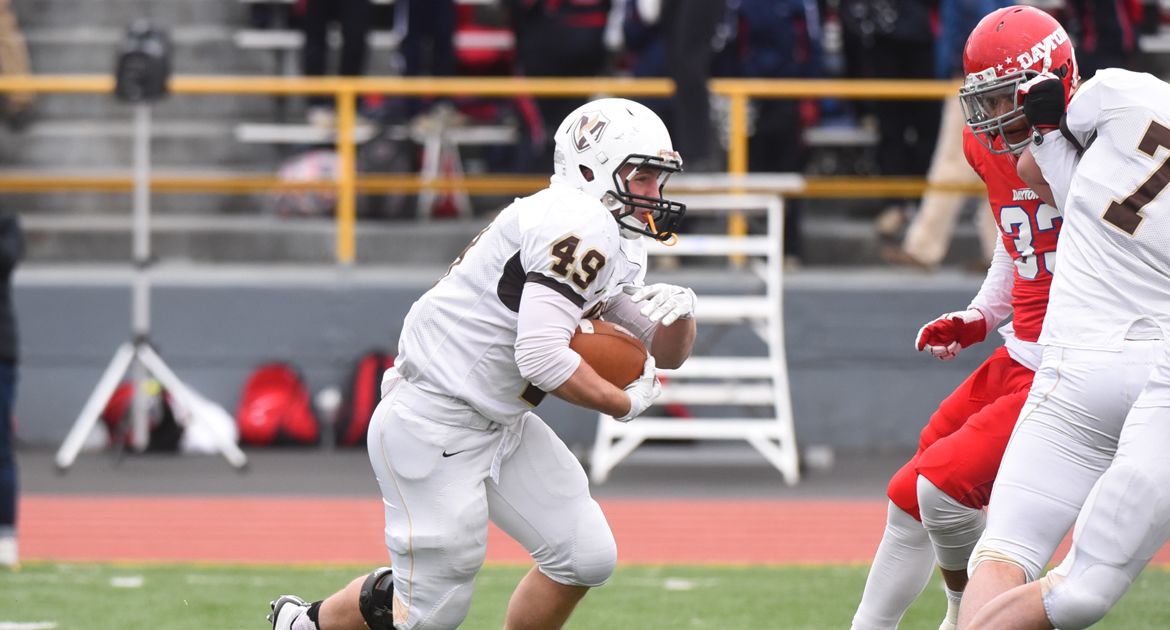 After a rough start to Saturday's game in Dayton, the Crusaders were a few inches from tying the contest at 14-14 in the second half. However, Ben Lehman (Elgin, Ill./Saint Edward Central Catholic)'s pass attempt to an open Brandon Hall (Muskegon, Mich./Orchard View) on a two-point conversion got caught up the wind and sailed out of Hall's reach. From there, the Flyers scored 28 unanswered points en route to a 42-19 victory over the Brown and Gold at Welcome Stadium.

Dayton (6-2, 4-1 PFL) started its opening drive near midfield before Flyer quarterback Will Bardo and running back Connor Kacsor teamed up to record all 52 yards on the possession that yielded a UD touchdown. Down 7-0 before the offense touched the ball, Valpo fell further into trouble when Dayton recovered a fumble on the ensuing kickoff. Kacsor registered his second touchdown carry in under four minutes when he barreled in from a yard out to put the Flyers on top, 14-0.

Valparaiso (2-7, 0-5 PFL) appeared to have a response in order on its next possession. Hall led the Crusaders down to the Dayton 11-yard line when an incomplete pass on 3rd-and-5 brought Jacob Newman (Lawrenceburg, Ind./Lawrenceburg) on for a 28-yard field goal try to put Valpo on the board. Newman's attempt sailed wide right and the Flyers retained a 14-0 lead at the end of one quarter.

Newman redeemed himself later in the first half when he connected on a 24-yarder that brought an end to an 11-play, 71-yard drive. The field goal made it 14-3 with just over nine minutes left in the half.

The Crusaders drove deep into Dayton territory towards the end of the quarter, but came away with three points again. With a goal-to-go situation, Hall battered his way down to the Flyers' 5, but an incompletion forced another Newman chip shot. Dayton led Valpo 14-6 after 30 minutes.

Valparaiso received the ball to begin the second half and took advantage. Lehman found freshman Frank Catrine (Springboro, Ohio/Bishop Fenwick) on two crucial third downs to scoot the Crusaders into the Dayton red zone for the fourth time. Eventually, Lehman handed it off to Hall for a four-yard touchdown run. Hall's ninth touchdown of the season made it 14-12.

Needing the two-point conversion to tie, Lehman hiked the ball out of shotgun, faked a rush to his right, and then unloaded a pass towards Hall. Tossing into a wind that gusted up to 30 miles per hour at times, the throw eluded Hall and the score remained 14-12.

The Crusader defense did its part in forcing a three-and-out on the next series. Valpo took over on its own 19 into the wind. Lehman and the offense needed nine yards to move the chains, but his pass to Catrine netted just six. The fourth down brought Alex Kozlowski (Novi, Mich./Detroit Catholic Central) out onto the field to punt from his own 26. The whipping wind wreaked havoc with Kozlowski's punt pushing it back towards the line of scrimmage. A Dayton bounce actually sent the ball behind the line where the Flyers took over on the Valpo 21.

From there, the Flyers opened the floodgates. Dayton expanded its lead to 42-12 on another Bardo toss and two rushing touchdowns. All three of their running backs (Kacsor, J.J. Greenwood, Jack Adams) recorded a touchdown carry.

The Crusaders actually outgained the Flyers by a margin of 433-369. However, Dayton played turnover-free football while the Crusaders tallied four turnovers.

Hall finished the afternoon with 108 yards on 20 carries. Saturday represented the third time in the last four games that he eclipsed the 100-yard mark.

Valparaiso returns home next Saturday to face Butler (4-5, 2-4 PFL) at 1 p.m. CT at Brown Field. The Bulldogs outlasted Morehead State 62-52 today in Indianapolis. Links to the audio and live stats will be available at valpoathletics.com.