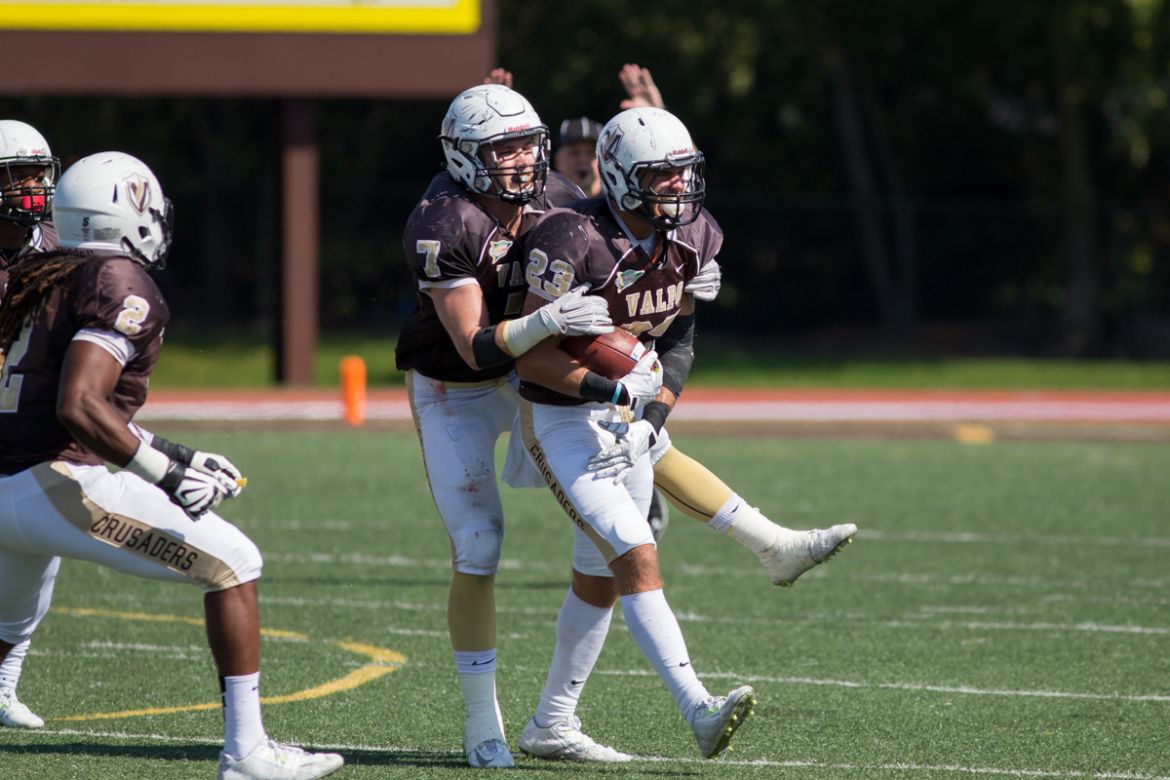 This Week in Crusader Football: The Crusaders’ three-game homestand has come and gone and they now return to the road Saturday for a PFL tilt at Richardson Stadium versus Davidson. Valpo capped off a resurgent 2014 campaign with a 27-13 win over the Wildcats last November at Brown Field. While both teams are in pursuit of their first victory in 2015, Davidson’s last win over a D-I program came at the hands of the Brown and Gold in late 2012 in a 28-27 overtime affair in Valparaiso.

On the Air: Todd Ickow will be in the booth calling the action on the Valpo Sports Radio Network. For the 10th straight season, WVUR (95.1 FM, Valparaiso) is home to all 11 Crusader football games in 2015. Fans can also tune in through valpoathletics.com. Ickow will handle all the play-by-play with Brad Collignon providing color commentary. Davidson All-Access will be offering video ($5.95 single game package). Links to the audio, pay video, and live stats are posted at www.valpoathletics.com.

All-Time Series: Davidson leads the all-time series, 7-2, over the Brown and Gold. The Wildcats won the first five meetings after the turn of the century, but the two teams have split the last four contests. The Crusaders claimed the most recent meeting (November 22, 2014) thanks to a 27-13 victory at Brown Field.

Scouting Davidson: Like Valpo, Davidson has stumbled out of the gate in 2015. Opponents have posted 138 points in three games versus the Wildcats for an average of 46 points per contest. The discord hasn’t been quarantined to the defensive side of the ball, either. Davidson has been on the wrong end of two shutouts in three weeks. The Wildcats put 21 points on the board at home versus Catawba College, but were kept on the perimeter of the Citadel 40-yard line in Week 1, and marched no farther than the Morehead State 29 in Week 3.

While Davidson’s passing game has been unfruitful at times (32-for-78, 1 TD, 7 INT), Jeffrey Keil has emerged as a force at running back. As a freshman last season, Keil led all rushers in the 2014 season finale at Brown Field with 132 yards on 26 carries versus the Crusaders. The sophomore has totaled just under 200 yards on 34 attempts and is responsible for two of Davidson’s three touchdowns on the young season. Coach Nichols has one of the elite receivers in the PFL in William Morris, but getting him the ball has proven easier said than done. Morris’s 1,224 receiving yards last season led the league and was good for 9th-most in the nation. Furthermore, only two players in Division I FCS reeled in more passes than his 98. In last November’s tilt at Valpo, Morris and then-senior Tanner Kuramata produced carbon copy games of 10 catches and 122 receiving yards. Taylor Mitchell and John Cook both project to take snaps under center Saturday.

The Davidson defense is a young unit as just three seniors grace its two-deep. Having surrendered an average of 338.7 yards on the ground per game, the Wildcat rush defense is last in all of D-I FCS. Valpo’s four-man running back rotation of Jake Hutson, Brandon Hall, Grayson Bastin, and Legend Choudhry should expect more success on the ground than last Saturday versus San Diego.

In addition to serving as quarterback, Cook logs overtime on special teams. All 24 of Davidson’s punts have come off the junior’s foot (34.7 yards per punt average). Trevor Smith handles the kicking duties for the Wildcats. He’s been flawless on his three PAT attempts, but came up short on his lone field goal attempt - a 48-yarder - versus Catawba on September 12th.

Head Coach Paul Nichols: Nichols is in his third season at the helm of the Wildcat football program. At 34 years old, he is the second-youngest head coach in all of Division I football. Following the conclusion of his collegiate playing days, Nichols began his coaching career as a graduate assistant under Jim Tressel at Ohio State in 2004. After two seasons in Columbus, he spent three seasons at Marshall and a couple at Toledo. In 2012, former Illinois head coach Tim Beckman named him Director of Player Personnel. Davidson scooped up Nichols after one season in Champaign and named him the 27th head coach in program history in December of 2012. A Davidson alumnus (‘03), Nichols graduated as the school’s record holder in career passing yards, completions, and touchdown passes.

Crusader Crumbs: Of Valpo’s 19 points scored this season, 13 have come off turnovers...after surrendering just five sacks in all of 2014, Valpo has allowed nine through its first three tilts...freshman wideout Jean Rene is averaging 16.3 yards per reception, good for 70th in the nation...the Crusader defense has returned five picks for nine yards; opponents have ran back six interceptions for 126 yards...both teams are in search of their first points in the third quarter of a game...the Brown and Gold are 12-for-47 (25.5%) on third down conversions; Davidson is 11-for-46 (23.9%)...of the 78 passes attempted by Wildcat QBs, seven have been picked off (8.9%)...Valpo has had two players (J.J. Nunes at Eastern Kentucky, Kellan Hughes vs. San Diego) register two interceptions in the same half of a game this season.