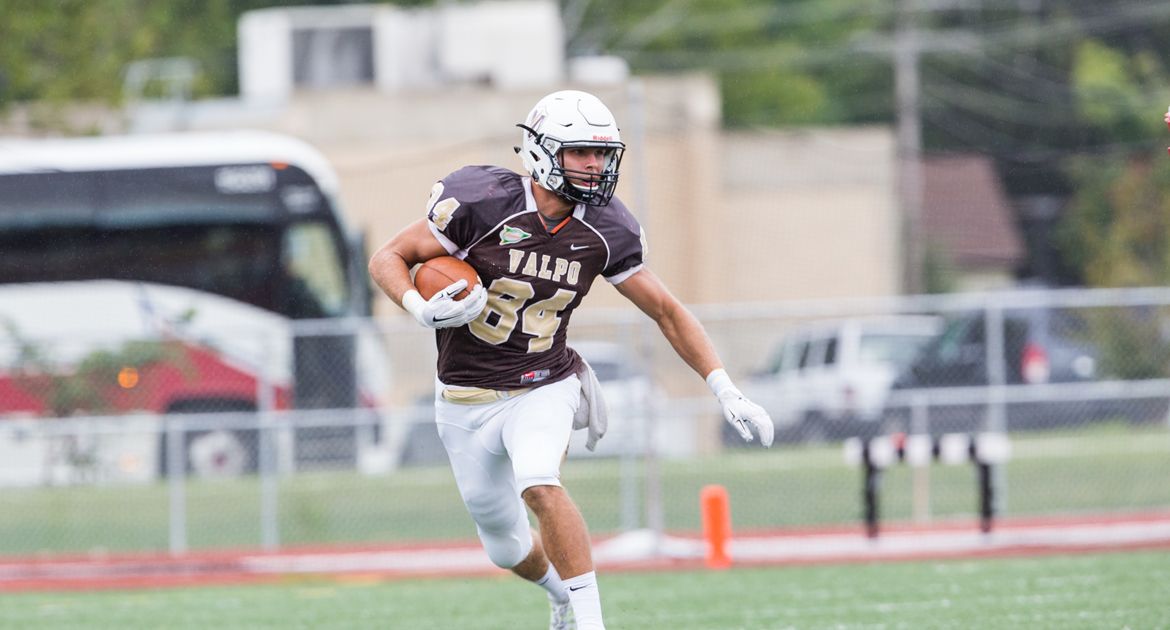 This Week in Crusader Football: The Crusaders enter malicious territory this Saturday as they visit Drake Stadium in an attempt to tame the Bulldogs. Sophomore Ryan Clarke, the reigning PFL Offensive Player of the Week, is expected to start under center for the Brown and Gold. Clarke tied a school record last week for touchdown passes in a single game when he dismantled the Davidson defense for five scores through the air. The Valpo offense will have a tougher test this week as Drake has surrendered just 27 points in its first two league contests and is limiting its opposition to 110 rushing yards per game.

On the Air: Todd Ickow will be in the booth calling the action on the Valpo Sports Radio Network. For the 10th straight season, WVUR (95.1 FM, Valparaiso) is home to all 11 Crusader football games in 2015. Fans can also tune in through valpoathletics.com. Ickow will handle all the play-by-play with Dave Huseman providing color commentary. True Blue TV, Drake’s video portal, will be offering live coverage ($9.99 single game price). Links to the audio, pay video, and live stats are posted at www.valpoathletics.com.

All-Time Series: The Bulldogs own a 19-3 edge over the Brown and Gold in the all-time series, including a perfect 10-0 mark at Drake Stadium. Despite Drake’s 11 game-winning streak over Valpo, the Crusaders have played DU tight in recent history. Four of the last five meetings have been decided by two scores or fewer.

Scouting Drake: Historically, Drake is a team predicated on defense and the 2015 edition appears to be no different. The Crusaders and Bulldogs always make for a good matchup, but this contest carries more intrigue as two of the top linebackers in the PFL will be on the same field. Senior John Hugunin is well on his way to another 100-tackle campaign. The fifth-year senior has collected All-PFL awards at each rung of the ladder: Second Team (2012), First Team (2013), Honorable Mention (2014). Hugunin, who is serving as captain for the second striaght season, owns 344 career tackles. Valpo’s Alex Green has collected 282 in that same span, but 24 of those came during the entirety of his freshman season. Hugunin stands as the only player in FCS to have forced five fumbles already this season (four of those came at North Dakota on Sept. 12th). He’s compiled 35 tackles - three for a loss - in three career games against the Crusaders. DE Mack Marrin is another Bulldog that the Crusader offensive line will have a tough time keeping on a leash. Last season’s PFL Freshman Defensive Player of the Year already has five TFLs - including three sacks - to his name in 2015. It seems right on pace for Marrin, who recorded 12.5 of his 31 tackles (five sacks) behind the line of scrimmage in 2014.

Redshirt senior QB Andy Rice and junior running back Conley Wilkins have been responsible for ten of the Bulldogs’ 14 trips into the end zone, although the latter was absent in last week’s tilt at Campbell. Gary Scott Jr. and Brock Reichardt split the running duties in Buies Creek, but managed just 68 yards on 25 carries. Wilkins is listed atop Drake’s two-deep this week. His availability represents the X-factor in this contest as his 169.5 all-purpose yards per game average is eighth in the country. While Rice’s completion percentage rests at 55.2%, he’s thrown five touchdowns opposite one pick in 105 passing attempts. Rice and second-string QB Cody Thibault spread the wealth as much as Valpo: 15 different receivers have logged a catch and seven have hauled in at least one TD.

Head Coach Rick Fox: Fox is in his second season as head coach of the Bulldog football program. The Wheaton College grad took over for Chris Creighton in December of 2013. Fox served as offensive line coach at Aurora (Ill.) University from 1987-92 after he began his coaching career at Wheaton in 1986. Fox joined the Drake coaching staff in 2008 following an eight-season stint at Centre College in Kentucky. Fox had served as special teams coordinator, offensive line coach, and assistant head coach before becoming the 26th head coach in Drake’s storied history.

Crusader Crumbs: Thanks to freshman Joey Diaz-Martinez and sophomore Kellan Hughes, Valpo is the only FCS team to have two players with three interceptions or more each...sophomore Frank Catrine caught a career-high 135 yards last Saturday at Davidson...the Crusaders have never won at Drake Stadium in ten attempts...Valpo has scored ten first-quarter points versus the Bulldogs’ seven...Crusader quarterbacks have completed passes to 15 different receivers this season...the Brown and Gold are still in search of their first rushing touchdown of the season...Jarrett Morgan’s monster game on special teams last week thrust him into 29th place in FCS in yards per return (26.5)...senior Alex Green is 18 tackles shy of 300 for his career...with their next interception, the Crusader defense will match its output from all of 2014 (8)...18 of J.J. Nunes’s 30 tackles have been solo stops...opponents have been 4-for-4 on 4th down versus the Brown and Gold...junior Jacob Newman has connected on 80% of his field goal attempts each of his three seasons at Valpo...Morgan recorded his fourth block in three weeks last season at Brown Field versus Drake...Valpo has taken a lead into the fourth quarter in each of the last two matchups against the Bulldogs...Drake is one of seven PFL teams that has yet to suffer a loss at home.