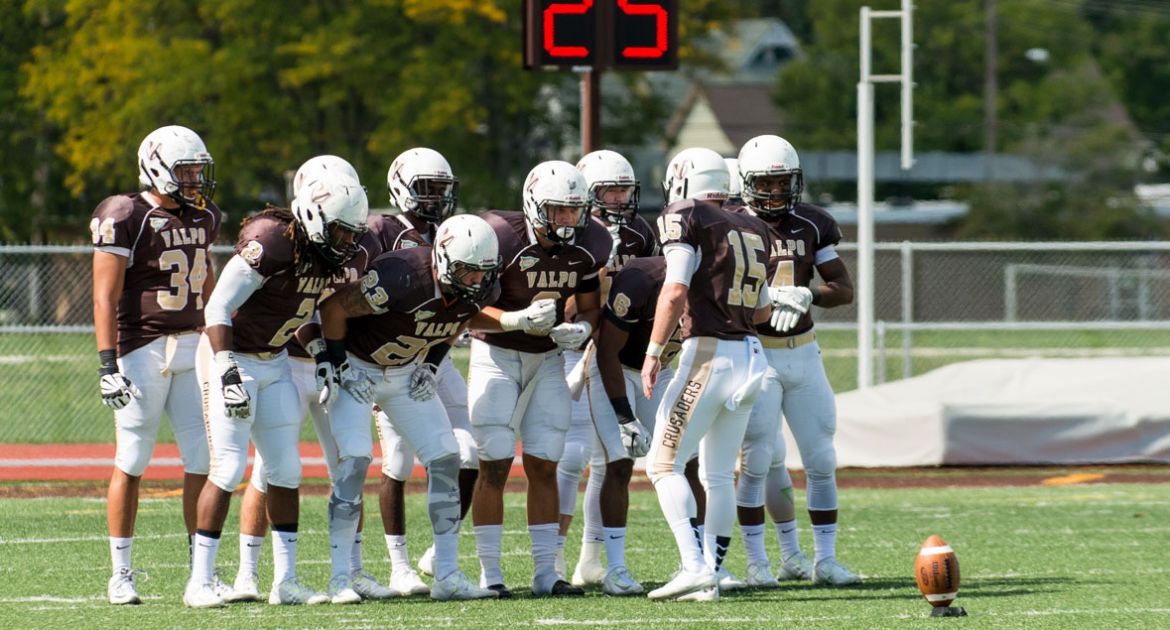 This Week in Crusader Football: The Dayton Flyers put their perfect record on the line when they make their biennial trip to Brown Field on Saturday. Dayton is the only postseason-eligible PFL team remaining with a goose egg in the loss column of both its conference and overall records. Head coach Rick Chamberlin and his team were dealt a crushing blow last week, though, with the news that All-PFL running back Connor Kacsor suffered a season-ending knee injury in practice. Nevertheless, the show went on and QB Alex Jeske picked up the slack in a pivotal 13-12 win over San Diego at Welcome Stadium.

On the Air: ESPN3 will carry live coverage of Saturday’s game. Todd Ickow will be in the booth calling the action on the Valpo Sports Radio Network. For the 10th straight season, WVUR (95.1 FM, Valparaiso) is home to all 11 Crusader football games in 2015. Fans can also tune in through valpoathletics.com. Ickow will handle all the play-by-play with Dave Huseman providing color commentary. Links to the audio, video, and live stats are posted at www.valpoathletics.com.

All-Time Series: Dayton owns a 22-2 edge over the Brown and Gold in the all-time series, including a 10-1 record at Brown Field. Valpo’s last win over the Flyers came during the 2003 season in a 33-28 ballgame at Welcome Stadium. Dayton has averaged 40.8 points per tilt in the 24 contests against the Crusaders.

Scouting Dayton: Few are shocked to see Dayton atop the PFL standings once again. UD has won outright or possessed a share in 11 Pioneer Football League championships since the league formed in 1993. What may come as a surprise to some is the fact the Flyers have trailed at halftime in four of their first five tilts. Along with its 5-0 record, Dayton has hashed out a +32 point differential, good for an average margin of victory of just over six points.

The aforementioned injury to Kacsor, the 2014 PFL Offensive Player of the Year, may force an adjustment to Coach Chamberlin’s play calling. Dayton enters Saturday’s game having executed 240 rushing plays to 120 passing plays. The Flyer offense as is revolves around a pair of redshirt freshman in quarterback Alex Jeske and running back Jared Ruffing. Jeske, like former Dayton standout Will Bardo, is a dual-threat QB. He’s gained 145 yards with his feet and 890 with his arm. The Glen Ellyn, Illinois native boasts a completion percentage just above 56%, but has thrown four interceptions opposite six touchdowns. Ruffing, meanwhile, will most likely see an uptick in his workload. He’s rushed for 76 yards on just 25 touches so far this season.

The Dayton defense has been one of the best in FCS football in defending the pass. Opposing teams have managed an average passing efficiency rating of 79.99 when taking on the Flyers. (For the sake of comparison, Valpo owns an aggregate 94.5 passing efficiency rating.) If Ryan Clarke can dodge linebacker Christopher Beaschler (4.0 TFL, 2.0 sacks) and defensive end Nate Sudnick (2.0 TFL, 1.0 sacks), he still has to contend with a secondary that has accumulated nine interceptions, five of which have come by virtue of senior cornerback Cameron Stubbs, the most by a single player in FCS. Linebacker Jack Crain paces the Dayton D with 53 tackles.

After splitting the uprights on just three of his first six field goal tries this season, kicker William Will has nailed his last five in a row, including one from 44 yards and another from 48. Punter Sean Smith, a true freshman, is averaging a shade under 42 yards per boot and boomed a 74-yarder last week versus San Diego. He is one of five different Dayton players to have been named a PFL Player of the Week (Oct. 4).

Head Coach Rick Chamberlin: Few, if any, individuals are as synonymous with Flyers football as Rick Chamberlin. The Springfield, Ohio native and 1980 Dayton graduate is in his 42nd season as part of the Flyer football program. Chamberlin had served as an assistant coach for 28 seasons before taking over the reins in January of 2008. He enters Saturday’s contest with a 60-23 (.723) record at the helm of the UD program, including two PFL championship seasons (2009, 2010). Overall, Chamberlin has been involved in 354 of Dayton’s 654 victories. He was inducted into the University of Dayton Athletic Hall of Fame in 1989.

Crusader Crumbs: Valpo is in search of its first rushing touchdown of the season...Dayton is the least-penalized team in the PFL (4.6/game) while Valpo has been flagged the third-fewest (5.0/game)...the Brown and Gold are averaging 12.0 yards per catch on receptions at home...Crusader quarterbacks have completed passes to 15 different receivers this season...Frank Catrine, Jake Hutson, and Ryan Shea combined to catch eight passes for 140 yards at Dayton last November 1st...senior Alex Green needs just five tackles to reach 300 for his career...24 of J.J. Nunes’s 39 tackles have been solo stops...58 of the Flyers’ 122 points scored this season have come in the third quarter; Valpo has surrendered 56 third-quarter points thus far...of the 14 teams that have recorded nine or more or interceptions this season, five reside in the PFL (Jacksonville, 11; Morehead State, 10; Butler, Dayton, Valpo, 9).