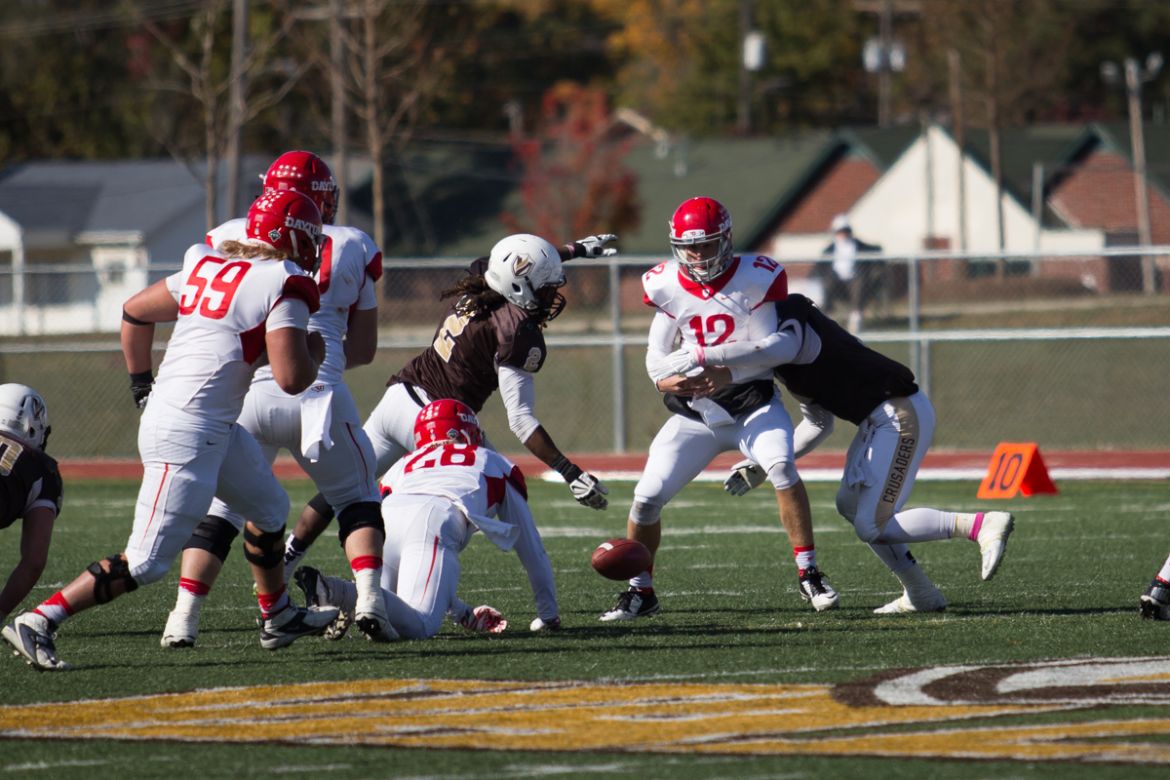 Freshman Jean Rene (Delray Beach, Fla./Wellington Community) snagged a pair of touchdown passes from Ryan Clarke (Hopatcong, N.J./Hopatcong) on Saturday, but Dayton capitalized on a trio of third-quarter Crusader turnovers to collect a 44-14 win and remain unbeaten on the season.

Quarterback Alex Jeske and the Flyer offense operated at a breakneck pace in the onset. The Valpo defense forced five third downs on Dayton's opening possession, but the visitors moved the chains each time. The fifth conversion - a five-yard QB keep - resulted in UD's first touchdown of the game. The Flyers ran 15 plays on the drive that consumed just four minutes and 40 seconds of clock.

The Crusader offense was unable to manufacture anything on its first drive. A three-and-out forced Alex Ng (Royal Palm Beach, Fla./Royal Palm Beach) onto the field for a 36-yard punt.

The Flyers needed just seven plays to double its lead. Jeske capped off the 59-yard drive with a seven-yard TD pass to Tyler Tumpane. William Will's extra point made it 14-0.

Valpo stormed back towards the end of the first quarter at the behest of Clarke and Rene.

Following the Jeske-Tumpane score, Clarke maneuvered the Crusaders downfield using his legs once - a two-yard chain-mover on 3rd and 1 - and his arm once - a dazzling 21-yard pitch-and-catch to Frank Catrine (Springboro, Ohio/Bishop Fenwick) to move the Brown and Gold into Dayton territory.

Clarke wasted no time once on the other side of the 50. Valpo's sixth play of the drive resulted in a 32-yard strike from Clarke to Rene. Jacob Newman (Lawrenceburg, Ind./Lawrenceburg) tacked on the extra point to make it 14-7 with 3:41 remaining in the first quarter.

The tandem of underclassmen teamed up again in the second quarter to tie it at 14-14.

A pair of lengthy Brandon Hall (Muskegon, Mich./Orchard View) rushes propelled Valpo inside Dayton's 15-yard line. One of Dayton's three sacks on the day temporarily moved the Crusaders back to the 20, but that just gave Clarke and Rene more room to work.

Clarke delivered a perfectly-placed ball to Rene on the far sideline with 9:11 left in the half for the game-tying score.

The Flyers regained their lead before the break, though.

Will knocked a 35-yard field goal try through the uprights with five and a half minutes remaining in the half. The Flyers grasped a 17-14 halftime lead.

UD emerged from the locker room and scored on its first possession of the second half. Running back Jack Adams finished off a nine-play, 59-yard strike when he shoved his way across the goal line from two yards out.

The next four Valpo possessions ended prematurely as the result of a fumble or turnover on downs. The Flyers parlayed the four miscues into 20 points as they expanded their lead to the final score of 44-14.

John Guilford (Spencer, Ohio/Black River) was a star on defense for the Crusaders. The senior defensive end racked up six tackles total (five solo), 3.5 of which came behind the line of scrimmage. He posted 2.5 sacks, forced a fumble, and broke up a pass. He now has 8.0 tackles for a loss on the season. Alex Green (Zionsville, Ind./Zionsville Community) was busy at linebacker. He tallied 12 of his team-high 13 tackles in the first half.

Clarked finished the afternoon 15-of-28 for 162 yards including a pair of touchdowns and interceptions. Catrine led all receivers with eight catches for 72 yards. Both of Rene's catches on the day went for scores.

Senior Jake Hutson (Blanchard, Mich./Montabella) led the rushing attack for the Brown and Gold. He amassed 41 yards on eight touches.

Valpo (1-5, 1-3 PFL) will play host to Stetson (1-5, 0-4 PFL) next Saturday at Brown Field. Kickoff in the first-ever matchup between the two teams is slated for 1:00 pm CT. Links to the audio and live stats will be available at ValpoAthletics.com.