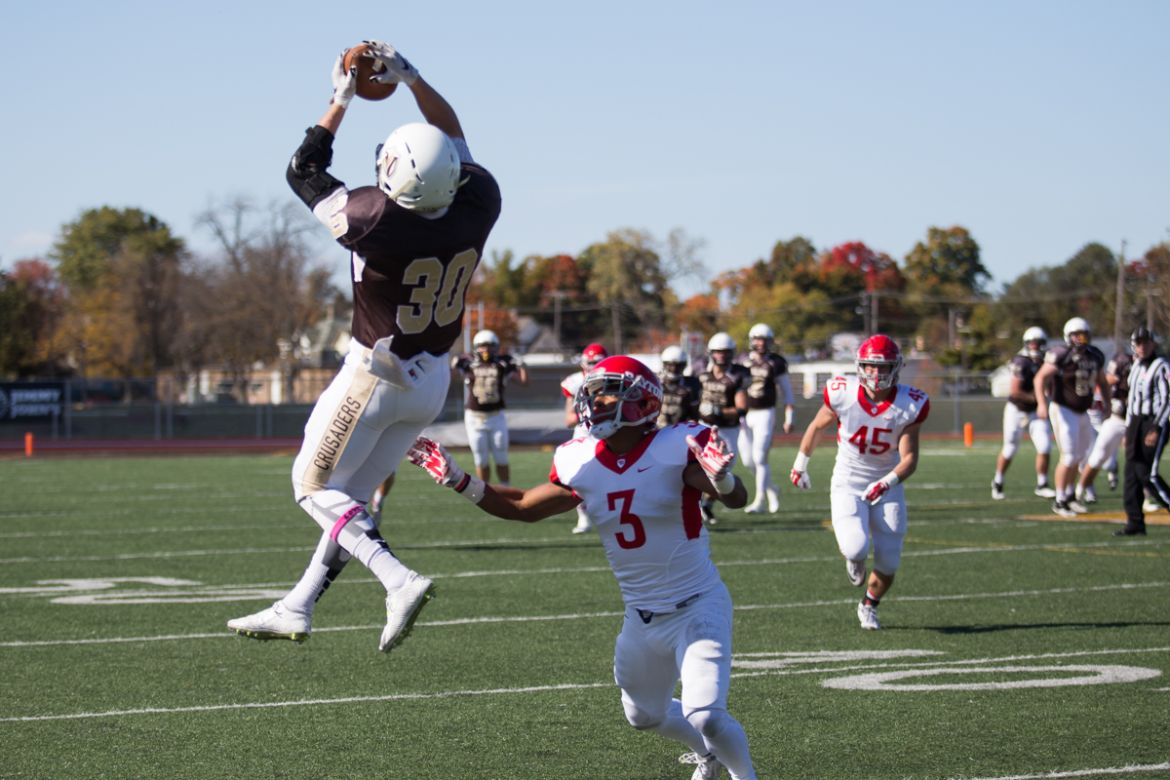 This Week in Crusader Football: Stetson storms into Brown Field for the first ever meeting between the Crusaders and Hatters in a tilt that serves as Valpo’s penultimate home game of the 2015 season. Stetson’s last - and only - trip to the Hoosier State resulted in a 20-point loss to the Butler Bulldogs back in October of 2013. Head coach Dave Cecchini and his team would love nothing more than to duplicate that result heading into a bye week.

On the Air: Todd Ickow will be in the booth calling the action on the Valpo Sports Radio Network. For the 10th straight season, WVUR (95.1 FM, Valparaiso) is home to all 11 Crusader football games in 2015. Live stats will also be available for Saturday’s contest. Ickow will handle all the play-by-play with Dave Huseman providing color commentary. Links to the audio and live stats are posted at www.valpoathletics.com.

Head Coach Dave Cecchini: Cecchini was 4-8 in 2014, his first year at Valparaiso. His first head coaching win came on Sept. 20th, 2014 when the Crusaders defeated William Jewell, 39-30. Cecchini led the Brown and Gold to their first four-win season since 2007 and their first two PFL-win campaign since 2008. Cecchini’s fresh voice and unparalleled attention to detail on both sides of the ball helped last year’s squad to a 156-point improvement on defense over its predecessors in 2013. Cecchini made a name for himself as offensive coordinator at Harvard in 2003 when the Crimson compiled the fourth-best offense in the nation en route to an undefeated 10-0 season and an Ivy League Championship. Furthermore, The Citadel set 16 offensive records under his tutelage.

All-Time Series: Saturday will be the first ever matchup between the Crusaders and Hatters. Stetson discontinued its football program following the 1956 season. It wasn’t until 2013 - following a 57-year hiatus - that Hatter football experienced a revival in DeLand. Stetson went 2-9 overall, 1-7 in league play in its inaugural season before going 5-7 last season including a 3-5 mark within the PFL.

Scouting Stetson: Donald Payne has been the one player that Stetson can proudly hang its hat on. Arguably the most dynamic talent in the PFL, the junior possesses PlayStation-esque career numbers: 375 tackles (226 solo), 44 TFL, 10 sacks, eight interceptions, 25 pass breakups, five fumble recoveries, and four fumble recoveries. Those would be phenomenal numbers for a fifth-year senior, but consider that production has been obtained through 29 games, or, two-and-a-half seasons. The ears of both the college football world and pro scouts alike perked up last season when the All-American recorded 30 tackles versus Campbell in a 28-24 victory on Nov. 1st. His list of awards and recognitions read like a New York City phone book. With all that said, Payne’s efforts alone have not been enough to shut down opposing offenses. Stetson surrenders, on average, 32.5 points per game. The Hatters have allowed 41 points in both of their league games away from Spec Martin Stadium. Defensive end Davion Belk’s output has mirrored that of John Guilford. Belk owns eight tackles for a loss this season including five sacks. The junior also blocked a Josh Lee field goal attempt at Drake back on Sept. 26th. To Stetson’s credit, its defense has shown a tendency to step up in pressure situations. Opponents have been successful just 35% of the time on third down against the Hatters (41st-best nationally) while they’ve converted only 28% of fourth-down attempts (10th in the country). It’s possible SU’s defense has turned the corner: they yielded just 16 points to a rising Campbell squad last week.

The similarities between Stetson and Valpo aren’t limited to the defensive side of the ball. Outside of their season-opening 42-13 triumph over Webber International, the Hatters have struggled to light up the scoreboard. Mercer, Dayton, and Jacksonville each held Stetson to 14 points. Meanwhile, Campbell and Drake banished SU from the end zone in their matchups. Quarterback Ryan Tentler has thrown for 890 yards and possesses a completion percentage just north of 51%. However, he has thrown seven interceptions opposite four TD passes. The Hatters are averaging 2.4 yards per carry, a figure that has dropped since junior RB Cole Mazza has been absent from the lineup. Wideouts Ja’Vonta Swinton and Darius McGriff have hauled in over 43% of Stetson’s receiving yards. An astounding 22 players have logged at least one catch for the Hatters.

Head Coach Roger Hughes: Hughes was chosen as the man to lead Stetson Football out of its 57-year hibernation in 2013. He and Cecchini crossed paths in the Ivy League in the mid 2000s. Cecchini was offensive coordinator at Harvard while Hughes was Princeton’s head coach from 2000-2009. Hughes got his coaching feet wet in 1983 as a graduate assistant at Doane College before serving in the same capacity at the University of Nebraska from 1984-85. From 1988-1999 he held assistant coaching positions at UW-Whitewater, Cameron College, and Dartmouth College before taking the reins at Princeton. Hughes enters Saturday with an all-time record of 55-73, 8-21 at Stetson.

Where Have I Met You Before?: Two alums of PFL schools are shining on Major League Baseball’s postseason stage. Pitcher Jacob DeGrom (Stetson) and second baseman Daniel Murphy (Jacksonville) have led the New York Mets to their first World Series appearance since 2000.

Crusader Crumbs: Jarrett Morgan began his tour de force last October 25th; as a freshman, he amassed 392 return yards and a touchdown on 11 kickoffs beginning at Morehead State that Saturday...Valpo is 6th in the nation in passes intercepted (10), but 3rd in the PFL...2009 was the last time the Crusaders clinched a victory heading into their bye week (20-17 win at Concordia [Wis.])...the Brown and Gold are 8-5 all-time on Oct. 24th...Stetson is just the second team from the state of Florida to play Valpo at Brown Field (Jacksonville)...the Crusaders boast 21 players from the Sunshine State, more than any state except Illinois.