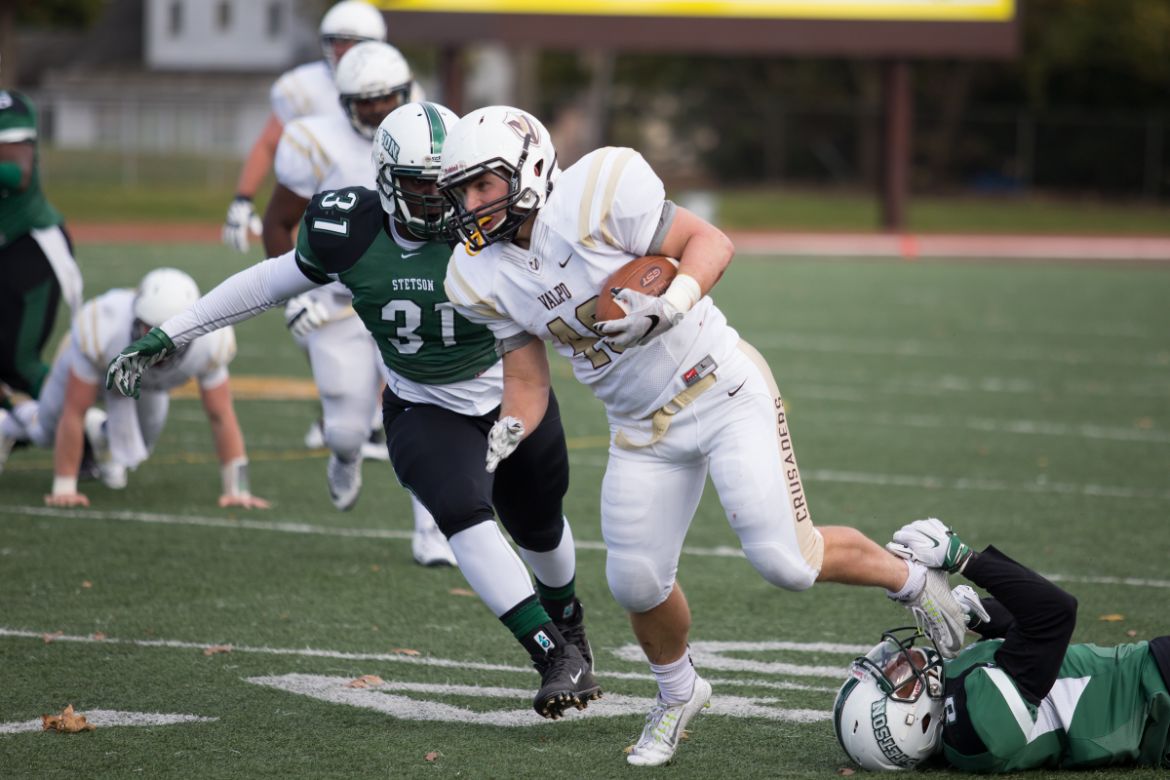 Stetson opted to go for it on fourth down three separate times Saturday, and each attempt resulted in touchdowns as the visiting Hatters fled Northwest Indiana with a 37-14 win over the Crusaders at Brown Field on Saturday.

Jean Rene (Delray Beach, Fla./Wellington Community) snagged his fourth touchdown catch in as many games as the freshman continues to impress in his inaugural campaign with the Brown and Gold. Sophomore Ryan Clarke (Hopatcong, N.J./Hopatcong) completed 16 of his 27 pass attempts for 109 yards, including the TD score to Rene, but he was brought down three times behind the line of scrimmage.

Valpo's rushing attack was held at bay for the vast majority of the contest. Stetson packed the box early and often, and, until the final drive of the game, Jake Hutson (Blanchard, Mich./Montabella) and Legend Choudhry (Houston, Tex./Goose Creek Memorial) were met at the line of scrimmage seemingly every time.

The Hatters struck first on their opening drive. Quarterback Ryan Tentler and the SU offense met little resistance until deep inside Crusader territory. Stetson faced a first-and-goal from the 8, but Arkee Brown was stopped shy of the plane on his first two rushing attempts. Tentler zigged and zagged his way up to the 1 on third down, forcing a decision from Stetson head coach Roger Hughes. Hughes kept his offense on the field and Craig Carrington rewarded his coach's faith with seven points.

A very similar situation greeted Stetson on its next possession. The Hatters navigated their way to the red zone before Alex Green (Zionsville, Ind./Zionsville Community) and the Crusader defense forced a goal-to-go on fourth down. Stetson employed some finesse the second time around. Running back Cole Mazza took the handoff from Tentler, but instead of trying to plow his way three feet, he tossed it over the top of the pile to an open Rob Coggin.

Valpo trailed 14-0 after the first quarter.

SU cornerback Chris Atkins kept the momentum going the visitor's way with a pick-six in the waning minutes of the first half. Atkins cradled Clarke's errant throw and returned it 34 yards to expand the Hatters' lead to 21-0.

The Crusaders didn't go quietly into the locker room. Clarke and company rattled off a nice two-minute offense capped off by a 17-yard touchdown reception by Rene. The nine-play, 75-yard drive took just over a minute. Rene's fourth touchdown catch in the last four weeks made it a 21-7 game at half.

Stetson used a trio of field goals, including one 50-yarder, to pull away from the Brown and Gold.

A 33-yard run by Hutson boosted the Crusader rushers out of the red and into the black as he set up Valpo for its first rushing touchdown of the season.

Operating out of the wildcat, Jarrett Morgan (Cooper City, Fla./Cooper City) went into the end zone untouched from the Stetson 1.

Stetson (2-5, 1-4 PFL) recorded its first win in PFL play with the 37-14 victory. Valpo (1-6, 1-4 PFL) will have the week off to prepare for the Hoosier Helmet showdown in Indianapolis. Butler (4-2, 2-1 PFL) welcomes the Crusaders to the Butler Bowl Saturday, Nov. 7th at 12:00 pm CT. Links to the audio and live stats will be available at ValpoAthletics.com.