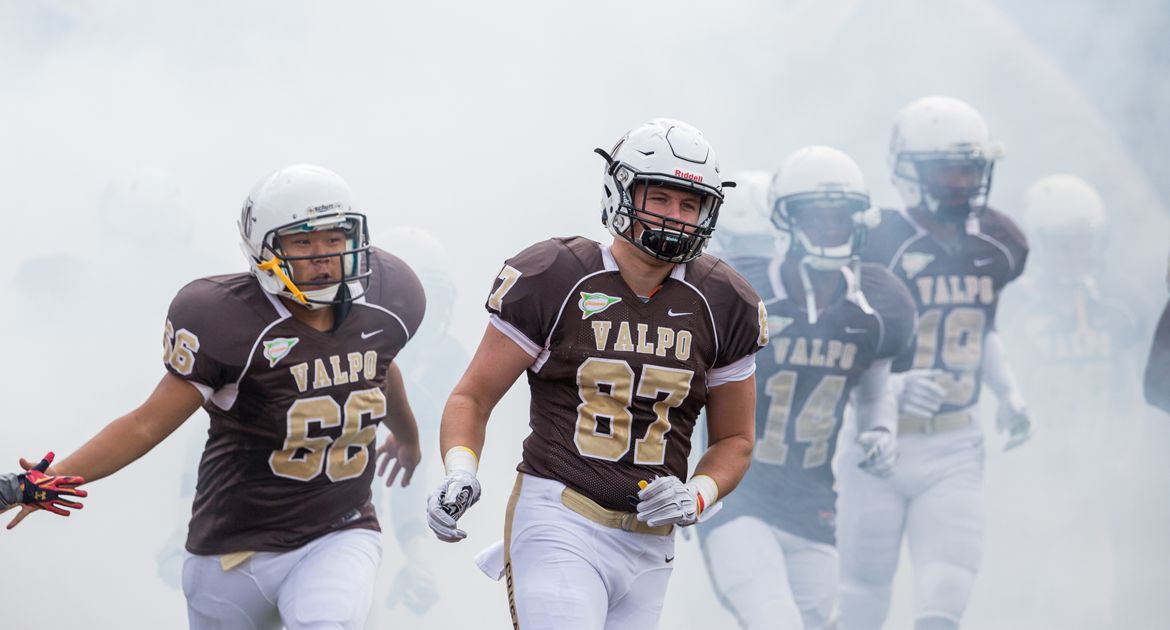 Freshman Griffin Norberg (Sunrise, Fla./Western) snagged a 26-yard touchdown pass in the first quarter of Saturday's game, but Butler QB Matt Shiltz accounted for four TDs while the Bulldog defense tallied a pair of pick-6s to defeat the Crusaders, 42-21, at the Butler Bowl in Indianapolis.

Shiltz scrambled his way into the end zone for the Bulldogs' first score. The redshirt senior's 12-yard dash capped a five-play, 43-yard drive at the 8:00 mark of the first quarter.

The Crusader offense went three-and-out on their first two trips on the field.

Beneficiaries of outstanding field position all day long, the Bulldogs capitalized on their final possession of the opening period. Butler started the drive at midfield and wasted no time navigating down to the Valpo 30. Shiltz tagged Anthony Scaccia for a 20-yard pass on the initial play of the drive. Five plays later, Shiltz found Pace Temple in the end zone for a 13-yard completion to make it 14-0 with 3:36 on the first quarter clock.

Ryan Clarke (Hopatcong, N.J./Hopatcong) and the Valpo offense came to life on its ensuing possession. The Crusaders used a rushing play, a passing play, and a penalty flag to march the ball downfield. Faced with a 4th and 7 at the Butler 34-yard line, Jean Rene (Delray Beach, Fla./Wellington Community) corralled an eight-yard pass to keep the drive alive. Clarke pegged Norberg on the very next play for a 26-yard scoring strike. Jacob Newman (Lawrenceburg, Ind./Lawrenceburg)'s PAT sliced the deficit in half.

The two teams traded touchdowns in the second quarter.

Butler needed to travel just 34 yards for its third TD of the afternoon. Shiltz completed the seven-play surge after leaping over the pile for a one-yard score.

The Brown and Gold answered right back with one of their longest scoring drives of the season. The possession appeared to stall at their own 35 following an incomplete pass on third down. But with the special times unit on the field, head coach Dave Cecchini called for a trick play. Punter Alex Ng (Royal Palm Beach, Fla./Royal Palm Beach) successfully sold it and John Guilford (Spencer, Ohio/Black River) rumbled his way forward for 15 yards and a first down.

Once in Butler territory, Clarke found Norberg for another big play - this one a 30-yard reception to thrust the Crusaders into the red zone. Four plays later, Clarke marched in from five yards out to make it a one-possession game.

After pinning Valpo inside its own 5 twice in the second half, the Bulldogs used a pair of pick-6s to pull away from the Crusaders.

Trailing 42-14, Scott Staal (Grand Haven, Mich./Grand Haven) relieved Clarke at quarterback in the fourth quarter. The redshirt junior had some success in the latter stages of the game. He led the Brown and Gold downfield before Jake Hutson (Blanchard, Mich./Montabella) danced his way in from five yards out.

It was too little, too late, however. The Bulldogs reclaimed possession of the Hoosier Helmet with a 42-21 victory.

Nine different Crusader receivers logged a catch Saturday. Norberg led the way with 60 yards on three receptions. Clarke was 14-for-25 for 155 yards, including a touchdown and two interceptions. Staal finished 7-of-11 for 80 yards.

Valpo (1-7, 1-5 Pioneer) will return to Northwest Indiana next Saturday for the final home game of the 2015 season. Kickoff against Morehead State (5-4, 4-2 Pioneer) is slated for 1:00 pm CT. Links to the audio and live stats will be available at ValpoAthletics.com.