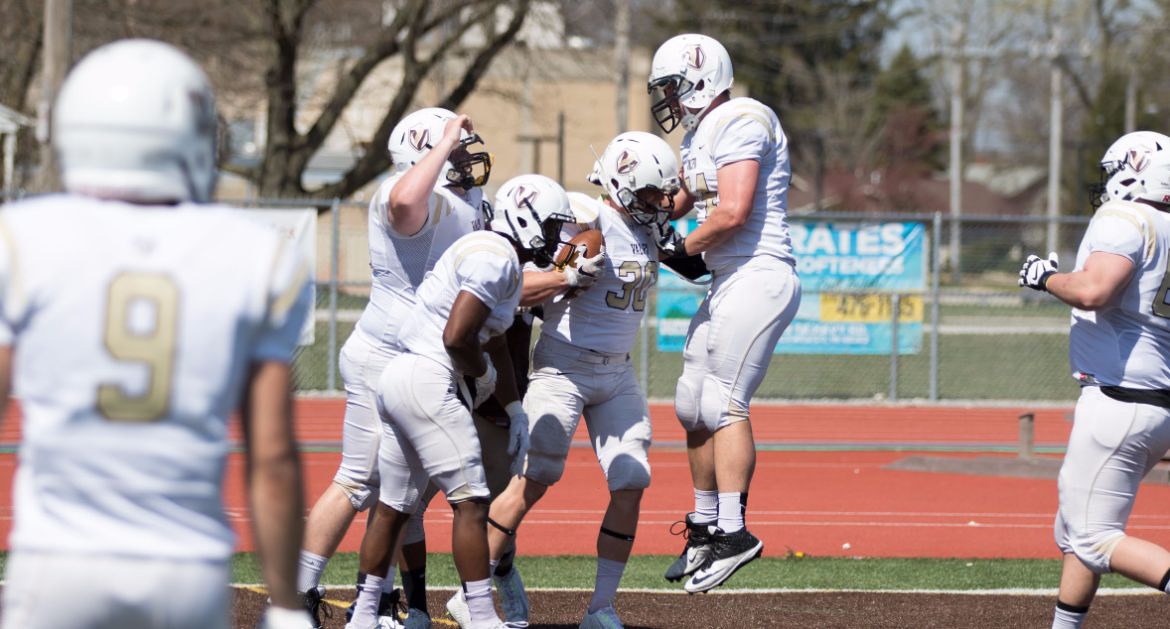 On a perfect and beautiful Saturday afternoon at Brown Field, fans got to snag a glimpse of the future and what to expect next fall for the Valparaiso football team. After last season’s high-scoring affair in the spring game, this Saturday’s game was a tale of two halves for the Crusaders. Head coach Dave Cecchini and his staff used a modified scoring system to reward both the offense and defense. The home White offensive team defeated the visiting Brown defensive team, 20-18. The game and play clock were not in use, while the offense started at either the 30, 40, 20, or 15 yard lines.

Things got off to a fast start for the offensive team in all white. Ryan Clarke (Hopatcong, N.J./Hopatcong) connected with team captain Frank Catrine (Springboro, Ohio/Bishop Fenwick) for a diving catch in the end zone. The 24-yard strike put the White team ahead 7-0.

The Brown squad kept things even throughout the first quarter scoring three points off Jalin Leandre (Hollywood, Fla./Hallandale)'s interception of Clarke. The Crusader defense would pick up four more points in the quarter with two coming off offensive penalties and 2 from stopping the White team on fourth down.

Entering the second quarter all tied at seven, the offensive team kicked things up a notch outscoring the Brown team 14-0.

Jarrett Morgan (Cooper City, Fla./Cooper City) had a 9-yard touchdown run to start the quarter bringing White ahead 14-7.  The White team followed that up with a drive down the field finishing it off with a 22-yard shuffle pass from Clarke to Dominque Bobo (St. Louis, Mo./Chaminade College Prep) for the touchdown. The Crusaders would miss the extra point and head into halftime up 20-7.

The second half was a different story as the Brown squad came out with a lockdown mentality, not allowing the White team into the end zone once.  The Brown team stopped a long drive by the White with a third-down sack at the 2-yard line and followed that up with a fourth-down stop to earn the Brown two points for a fourth down defensive stop.

Kye Hall (New Smyrna Beach, Fla./New Smyrna) picked up a huge tackle for a loss of seven yards towards the end of the third quarter to force a fourth down punt. The stop gave the Brown team an extra point along with an offensive penalty during the same drive to finish the third quarter 20-11.

Defense was the story in the final quarter of action as J.J. Nunes (Baltimore, Md./Baltimore Lutheran) picked off Clarke on the 21 yard line on third down, after the White team put together a big drive which included a 25-yard wide receiver reverse run by Jean Rene (Delray Beach, Fla./Wellington Community). With the score at 20-14 in favor of the offense, the defense once again found a way to stop the White team, earning two points for a fourth down stop after Jesse Slawnikowski (Wheatfield, Ind./Kankakee Valley (Milwaukee)) got to Clarke for a momentous sack.

The Brown team would force two more punts picking up a point apiece, one stop coming off a Hall 7-yard sack. After the final forced punt from the Brown team, the game was finalized with the offensive White team winning by a final score of 20-18. Clarke, who was the only quarterback to see the field, finished with two passing touchdowns both of which were 24 yards.

Valpo had scripted kicking and punting sessions in between each “quarter”, but action was not live.

The Crusaders will kick off their 2016 campaign on the road against Illinois State on Saturday, Sept. 3rd, with kickoff yet to be announced. The Redbirds are a FCS scholarship program who finished 10-3, 7-1 in the Missouri Valley Conference last season, losing in the second round of the FCS Playoffs to Richmond. Coach Cecchini’s squad will open their home slate two weeks later when it welcomes Trinity International to Brown Field.