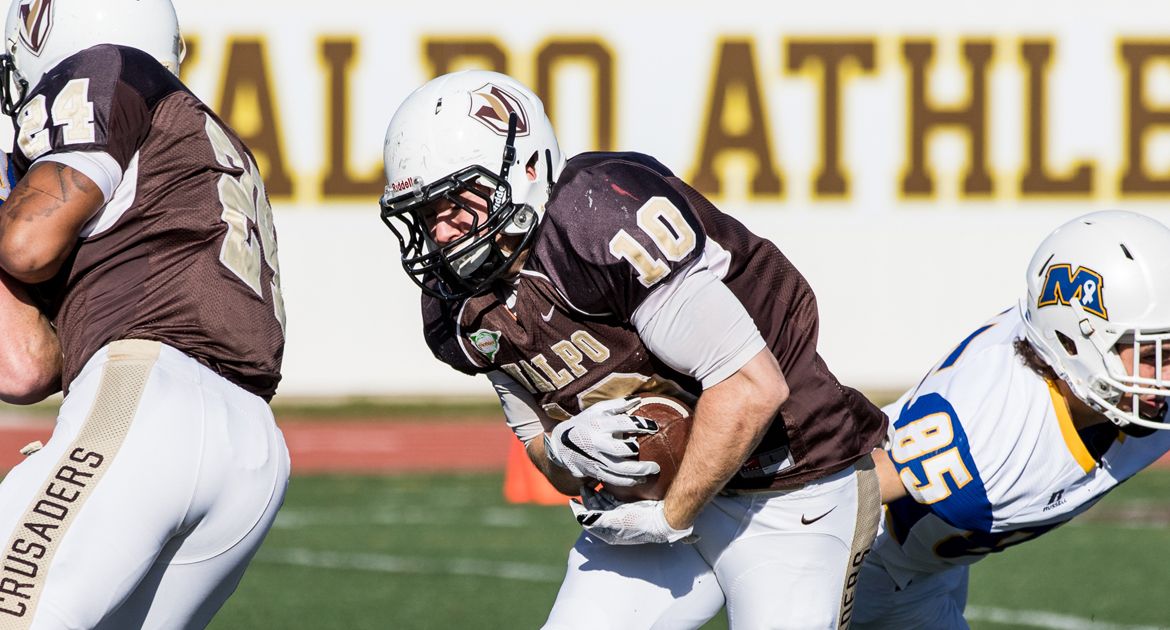 This Week in Crusader Football: The Valparaiso University football team continues its early-season schedule this Saturday as it travels to Sacred Heart to take on the Pioneers at noon CT. The game is the second of three non-league contests the Crusaders will play before starting the PFL slate.

Last Time Out: The Valpo defense played what head coach Dave Cecchini called the best half he’s seen from the unit in his time with the Crusaders in the first half Saturday at #8/10 Illinois State, but a number of turnovers gave the Redbirds short fields which they converted on, and Valpo went on to fall by a 50-13 final in the 2016 season opener. The Crusader defense surrendered just 15 yards on 11 plays on the first three Illinois State drives which started on Illinois State’s side of the 50-yard line, but three first-half turnovers led to short fields and 17 Redbird points as Illinois State led 34-10 at halftime.

Looking Ahead: The Crusaders open their home schedule at Brown Field next weekend, welcoming Trinity International to town for a 1 p.m. kickoff on Saturday the 17th. Starting with the game against the Trojans, Valpo will play three out of four games at home.

Following the Crusaders: For the 11th straight season, WVUR (95.1 FM, Valparaiso) is home to all 11 Crusader football games in 2016. Todd Ickow returns on play-by-play for Valpo, while David Huseman will provide the color commentary on Saturday. The game can also be seen live online, with links for the live audio, video and stats available via ValpoAthletics.com.

Head Coach Dave Cecchini: Cecchini is in his third season on the sidelines as head coach for the Brown and Gold in 2016. He enters Saturday’s game with a 5-18 record, both overall and in two seasons at Valpo. In his first season as head coach of the Crusaders, Cecchini led the program to a four-win season, its winningest season since 2007. Prior to arriving at Valpo, Cecchini served as offensive coordinator/quarterbacks coach for the prior four years at Lehigh.

Series Notes: Saturday’s matchup is the second all-time between Valpo and Sacred Heart, as it is the back end of a home-and-home series which began last season at Brown Field. The Pioneers defeated the Crusaders on Sept. 12 last year by a 56-3 final, as Sacred Heart totaled 526 yards of offense, including 255 on the ground.

Scouting Sacred Heart: The Pioneers opened up the 2016 season last weekend at Stetson, scoring 12 unanswered points in the second half for an 18-14 victory. Ose Imeokparia led the Sacred Heart offense with 112 yards on 13 carries, including an 80-yard touchdown scamper, while RJ Noel threw for 172 yards and two touchdowns. The game against the Crusaders is the second of three straight games versus PFL opponents to open the season for Sacred Heart.

Taking It to the House: Junior safety Kellan Hughes found paydirt in the season opener against Illinois State, intercepting a pass late in the second quarter and returning it 30 yards for a touchdown. For Hughes, it was his fifth career interception and the first touchdown in his time as a Crusader. Hughes was strong defensively outside of the pick as well, finishing second on the team with nine tackles, including six solo stops.

Splitting the Uprights: Junior kicker Jake Simpson made his Crusader debut in the season opener last Saturday and made it one to remember. Simpson connected on a 45-yard field goal in the first quarter and added a 43-yarder late in the fourth quarter, as well as an extra point. He became the first Valpo kicker to hit a pair of 40+ yard field goals in the same game since 2008.

Earning Weekly Honors: Both Hughes and Simpson picked up weekly awards from the Pioneer Football League office, as Hughes was tabbed the PFL Defensive Player of the Week and Simpson was named the co-Special Teams Player of the Week. It was the first time the Crusaders have earned multiple weekly awards from the PFL in the same week since Oct. 12, 2008, when Valpo swept all three honors.

Returning Experience, But a Youthful Squad: A total of 12 of last year’s 22 starters return in 2016 for the Crusaders - seven on offense and five on defense. But of the 99 members of the roster, only five are in their senior season of eligibility, and only three of those five appear on the two-deep. In all, the 2016 Crusaders feature just 23 total upperclassmen on their roster as compared to 24 sophomores and 52 total freshmen, including 39 true freshmen.

Norberg Earns Preseason Honor: Sophomore Griffin Norberg was named a preseason All-PFL choice at fullback. During his rookie year, Norberg saw action in the H-back role for Valpo, hauling in 16 passes for 138 yards. Norberg caught a pair of touchdown passes, including the game-winning touchdown in the Crusaders’ win at Davidson.

Oh Captain My Captain: Valparaiso enters the 2016 season with three permanent captains: senior defensive back J.J. Nunes, junior wide receiver Frank Catrine and redshirt junior offensive lineman Brian Lang. The Crusaders will also be selecting an individual to serve as game captain for each game as well - at Sacred Heart, that will be redshirt senior linebacker Charlie Hackett.

Wrapping Up 2015: Valpo closed out the 2015 campaign with a 1-9 overall record and tied for ninth in the PFL with a 1-7 record in league play. The Crusaders’ victory came on Oct. 3, as they went to Davidson and came away with a 42-35 win over the Wildcats. Senior linebacker Alex Green was selected as a First Team All-PFL honoree - the Crusaders’ first such choice since 2006 - as he ranked eighth in the country and led the PFL with 11.7 tackles/game.