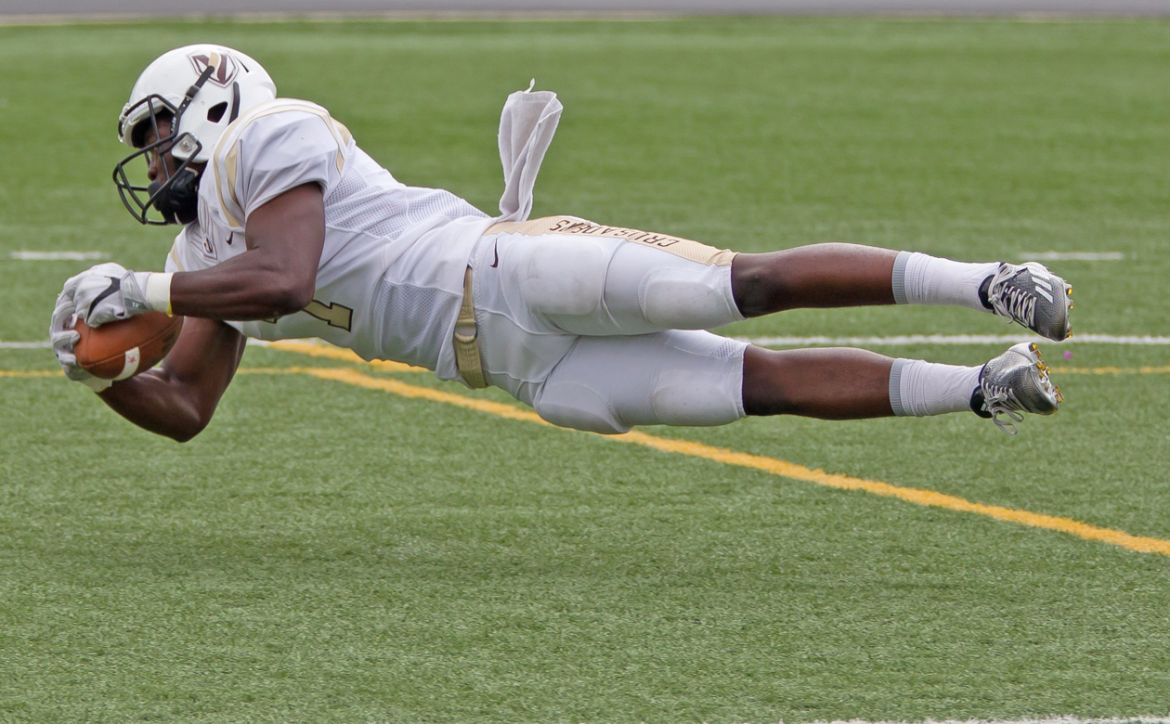 This Week in Crusader Football: The Valparaiso University football team returns to Brown Field on Saturday as the Crusaders continue PFL play by welcoming Drake. Valpo is looking to start 3-0 at home for the first time since 2004.

Last Time Out: For the third consecutive year, a game between Valparaiso and Morehead State was decided in the final three minutes. Also for the third straight season, the Crusaders saw a late lead slip away against the Eagles in a 29-26 defeat at Jayne Stadium on Saturday. Morehead State scored the go-ahead touchdown on a 4-yard pass from Austin Gahafer to Jake Raymond with 22 seconds remaining in the game.

Looking Ahead: Valpo hits the road each of the next two weeks, traveling to Stetson for a noon CT game on Oct. 15 before visiting San Diego on Oct. 22 at 3 p.m. CT.

Following the Crusaders: For the 11th straight season, WVUR (95.1 FM, Valparaiso) is home to all 11 Crusader football games in 2016. Todd Ickow is back for his 26th season as Valpo’s play-by-play broadcaster, while David Huseman is in his fourth year providing color commentary for home games. The game will also be streamed on ESPN3, WatchESPN and the ESPN app. Links for the live audio, video and stats will be available on ValpoAthletics.com.

Head Coach Dave Cecchini: Cecchini is in his third season as the head coach of the Crusaders. He enters Saturday’s game with a 7-20 record, both overall and in two-plus seasons at Valpo. In his first season as head coach of the Crusaders, Cecchini led the program to a four-win season, its highest win total since 2007. Prior to arriving at Valpo, Cecchini served as offensive coordinator/quarterbacks coach at Lehigh for four years.

Series Notes: The Bulldogs hold a commanding 20-3 lead in the all-time series with the Crusaders. Valpo has dropped 12 consecutive head-to-head meetings. Drake won last year’s showdown 34-7. The Crusaders were successful in stopping the pass, outgaining Drake 165-131 in yards through the air. However, the Bulldogs accounted for the bulk of the game’s rushing production, outgaining Valpo on the ground 205-43.

Scouting Drake: The Bulldogs are coming off a 35-10 loss to Dayton. Drake quarterback Grant Kraemer threw for 247 yards on 22-of-40 passing. Tight end Eric Saubert made nine catches for 96 yards. Drake struggled to slow down Dayton’s rushing attack. The Flyers averaged just over 100 rushing yards going into the game, but they racked up 323 against the Bulldogs. Drake’s defense is allowing 34.6 points per game, the most in the Pioneer Football League. Drake, which was picked to finish third in the PFL Preseason Poll, has reloaded after losing several key players to graduation, including all-time leading tackler John Hugunin. Running back Conley Wilkins led the PFL with 104.8 yard per game a year ago, when he accumulated seven rushing touchdowns in just six games. Wilkins, now a senior, is averaging 70.6 yards per game and has four TDs. Eric Saubert leads all of FCS tight ends in receptions per game (6.6) and is third in receiving yards per game (85.6).

Big Play Rene Does It Again: Sophomore wide receiver Jean Rene made what Valpo coach Dave Cecchini later described as one of the best catches he’s ever seen, a 21-yard lunging TD grab in the second quarter of Saturday’s game at Morehead State. While the play itself was extraordinary, the concept of Rene hauling in a TD pass has become a regular occurrence. He has a team-high five TD grabs and is tied for the team lead with 15 total catches. Rene has racked up 10 career TD receptions, all in his last 12 games. For comparison, former Valpo standout wide receiver Tanner Kuramata had four career TD catches at the end of his sophomore season.

Reaching the Century Mark: After going the entire 2015 season without a single 100-yard rusher, the Crusaders have received three straight 100-yard performances from Jarrett Morgan. The junior running back has established a new career high for rushing yards three straight weeks, most recently producing 110 against Morehead State. Morgan became the first Crusader back with three consecutive 100-yard performances since Jeff Horton in the final three games of the 2005 season.

Backfield Support: While Morgan has taken the bulk of the carries for the Crusaders this season, he hasn’t been a one-man show in terms of the Valpo rushing attack. Freshmen Cody Boxrucker and Kyle Cartales have both made contributions. Cartales ran for a career-high 41 yards on 10 carries on Saturday against Morehead State. Meanwhile, Boxrucker has three touchdown runs, more than any Valpo player had all of last season. This marks the first time in the last 10 years a Valpo true freshman has ran for three TDs in a season. A year ago, the Crusaders didn’t have their first rushing TD of the season until Week 7 against Stetson. They have four this season.

Making the Stops: The Valpo defense has seen a number of young players shine this season. Most recently, freshman Valparaiso High School graduate Dylan Johnson notched a career-high six tackles, five of them solos and one for a loss, against Morehead State. Sophomore Drew Snouffer has led the Crusaders in tackles in three of the team’s five games this season, including a career-high 13 tackles against Sacred Heart. After accumulating 16 tackles all of last season, Snouffer has a team-high 44 this year. Brandon Doepke made seven tackles against Morehead State, his highest total since Oct. 5, 2013. The redshirt junior missed each of the last two seasons with injury.

Oh Captain My Captain: Valparaiso enters the 2016 season with three permanent captains: senior defensive back J.J. Nunes, junior wide receiver Frank Catrine and redshirt junior offensive lineman Brian Lang. The Crusaders will also be selecting an individual to serve as game captain for each game as well – against Drake that will be senior defensive back Idode Kerobo.