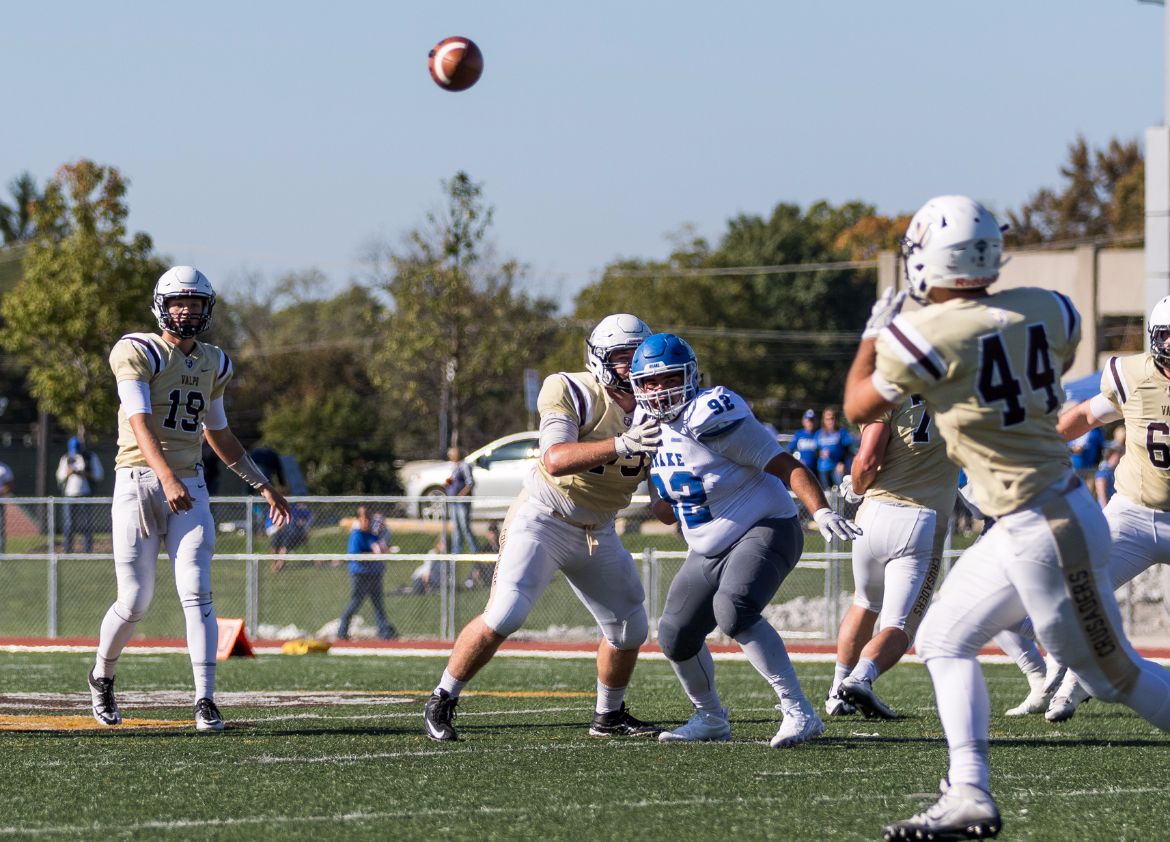 This Week in Crusader Football: The Valparaiso University football team travels to Stetson this week for a Saturday showdown with the Hatters. The Crusaders will look to get back on track after back-to-back competitive losses to Morehead State and Drake.

Last Time Out: The Crusaders suffered their first home setback of the season a week ago, 35-21 against Drake. Drew Snouffer made a career-high 14 tackles, Frank Catrine had a season-high eight catches and Joey Diaz-Martinez returned an interception for a touchdown, but the Bulldogs used their physicality to pull away for the win.

Looking Ahead: The Crusaders have another long journey awaiting them a week from now when they travel to San Diego for a game that kicks off at 3 p.m. CT on Oct. 22. The Toreros enter this week atop the Pioneer Football League at 3-0.

Following the Crusaders: For the 11th straight season, WVUR (95.1 FM, Valparaiso) is home to all 11 Crusader football games in 2016. Todd Ickow is back for his 26th season as Valpo’s play-by-play broadcaster, while Brandon Vickrey will add color commentary this week. The game will also be streamed on ESPN3, WatchESPN and the ESPN app. Links for the live audio, video and stats will be available on ValpoAthletics.com.

Head Coach Dave Cecchini: Cecchini is in his third season as the head coach of the Crusaders. He enters Saturday’s game with a 7-21 record, both overall and in two-plus seasons at Valpo. In his first season as head coach of the Crusaders, Cecchini led the program to a four-win season, its highest win total since 2007. Prior to arriving at Valpo, Cecchini served as offensive coordinator/quarterbacks coach at Lehigh for four years.

Series Notes: This marks just the second all-time meeting between the Crusaders and Hatters. Stetson resurrected its football program in 2013 following a 57-year hiatus. The first matchup between the two squads occurred last season at Brown Field, a 37-14 Stetson win. The Hatters converted on fourth down on three separate occasions, each time extending a drive the eventually resulted in a touchdown. The Crusaders were limited to 53 rushing yards. Jean Rene caught a touchdown pass, while Ryan Clarke went 16-of-27 through the air for 109 yards.

Scouting Stetson: Stetson allowed three touchdowns in the first 10:26 of last week’s nonleague game at Brown, but the Hatter defense cracked down from there in an eventual 31-21 victory. Stetson posted a season-high 167 rushing yards and scored three rushing touchdowns. Defensive back Donald Payne is the reigning PFL Defensive Player of the Week, marking the sixth time he’s received the honor in his career and the first since Nov. 2, 2014. Payne is the two-time defending PFL Defensive Player of the Year. He has 54 tackles this season, one ahead of teammate Jeb Boudreaux, who has 53. Brown has racked up 478 tackles in his Stetson career. The Hatters have won back-to-back games. They trailed 21-10 going to the fourth quarter at Davidson on Oct. 1 and rallied for a 31-27 triumph. Stetson ranks 10th in the PFL in scoring offense with 22.6 points per game, but the Hatters are in the top four in the league in total defense,  scoring defense, pass efficiency and passing defense. They’ve made nine interceptions, tied for the league most.  The Hatters defense has stepped up in the red zone this season. They’ve allowed opponents to score just seven times in 13 chances, the best red zone defense percentage in the PFL. Cole Mazza ranks fourth in the PFL and leads the team with 72.6 rushing yards per game, while quarterback Gaven DeFilippo has passed for 197.6 yards per game, fifth in the PFL. The team’s top receiver is Keegan Moore, who averages five catches per game.

Breakout Season: Sophomore Drew Snouffer continues to finds himself atop the team’s tackle chart with 58 on the season. In fact, Snouffer has more tackles than any other player in the Pioneer Football League. He ranks fourth in the league and 28th in the FCS nation in tackles per game at 9.7. As a freshman, Snouffer totaled just 16 tackles on the year. He set a new career high with 14 tackles against Drake, besting the mark of 13 he established earlier this season against Sacred Heart. He also leads the team with 2 ½ sacks.

Flag-Free Football: The Crusaders have been flagged for 22 penalties this season, the fewest in the PFL. Every other team has been called for at least 30, except Jacksonville (24), which has played just four games. In addition, Valpo’s 3.67 penalties per game is tied with Lafayette for the best in all of Division-I FCS football. Last week, Valpo committed just two penalties to Drake’s 12.

Rolling the Dice: Since Dave Cecchini took over as head coach, the Crusaders have not shied away from going for it on fourth down. They lead the PFL in fourth down conversions with eight and have been successful on 8-of-12 fourth-down tries. Valpo is one of 33 teams in the Division-I FCS nation with a fourth-down conversion percentage of 66.7 or better. Valpo has gone for it on fourth down more times than any other team in the PFL in each of Cecchini’s first two seasons.

Sunshine State: Saturday will be a homecoming of sorts for a number of Valpo players with 18 Floridians on the roster. The majority of those players make their homes upward of 150 miles away from DeLand, but Kye Hall’s hometown of New Smyrna Beach, Fla. is only 25 miles from Stetson.

Oh Captain My Captain: Valparaiso enters the 2016 season with three permanent captains: senior defensive back J.J. Nunes, junior wide receiver Frank Catrine and redshirt junior offensive lineman Brian Lang. The Crusaders will also be selecting an individual to serve as game captain for each game as well – against Stetson that will be running back Jarrett Morgan.