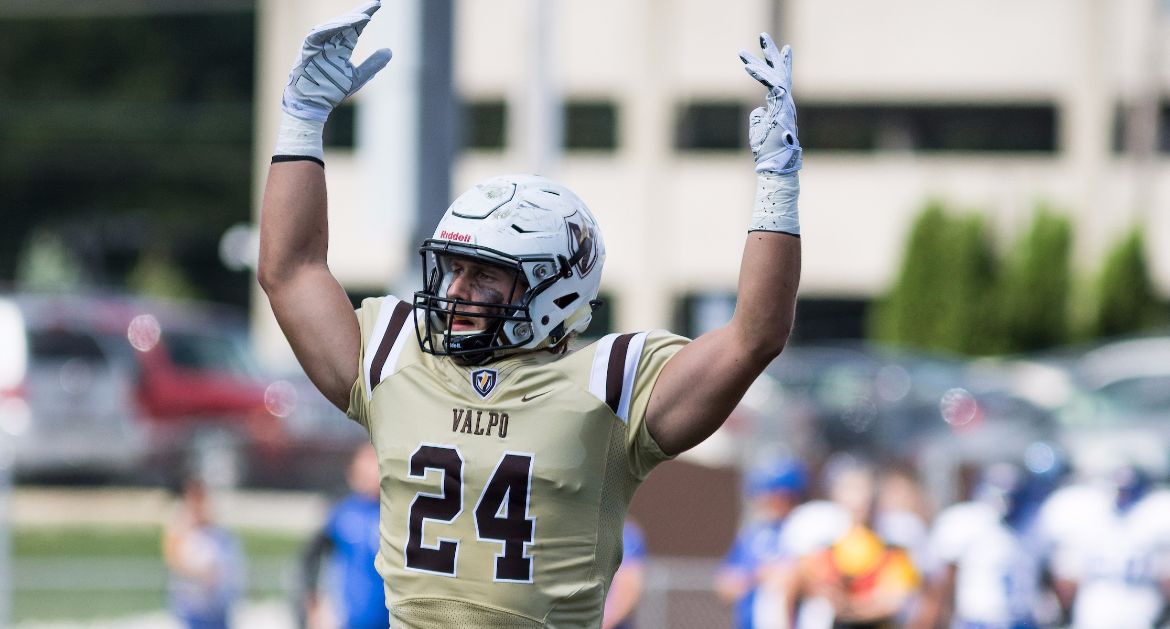 This Week in Crusader Football: The Valparaiso University football team heads west this week to face off with the first-place San Diego Toreros.

Last Time Out: The Crusaders are coming off a 21-18 road win over Stetson a week ago. Valpo’s defense forced four turnovers and the Hatters missed three field goals. The two teams battled wet conditions in the second half of the dramatic road victory

Looking Ahead: After two straight long road trips, the Crusaders will enjoy a week in Valparaiso as they welcome rival Butler on Oct. 29 at 1 p.m.

Following the Crusaders: For the 11th straight season, WVUR (95.1 FM, Valparaiso) is home to all 11 Crusader football games in 2016. Todd Ickow is back for his 26th season as Valpo’s play-by-play broadcaster, while Brandon Vickrey will add color commentary this week. Live video and stats will also be available courtesy of San Diego. Links to live video, audio and stats are available on ValpoAthletics.com.

Head Coach Dave Cecchini: Cecchini is in his third season as the head coach of the Crusaders. He enters Saturday’s game with an 8-21 record, both overall and in two-plus seasons at Valpo. In his first season as head coach of the Crusaders, Cecchini led the program to a four-win season, its highest win total since 2007. Prior to arriving at Valpo, Cecchini served as offensive coordinator/quarterbacks coach at Lehigh for four years.

Series Notes: San Diego holds an 18-5 lead in the all-time series. The Toreros own victories in each of the last 12 meetings between the two squads. Valpo’s last win against San Diego came on Oct. 18, 2003, a 41-34 triumph at Brown Field. The Crusaders are 2-9 all-time at San Diego. The Crusaders haven’t won in San Diego since Oct. 28, 2000. Valpo’s most recent trip to San Diego was among the most memorable games of the Dave Cecchini era. The Toreros scored on a desperation 44-yard pass with no time on the clock to avoid the upset and pull out a 32-27 win. The Crusaders had scored to take the lead with 28 seconds left on a 3-yard pass from Ben Lehman to Spenser Pennington.

Scouting San Diego: San Diego walloped Drake 38-7 a week ago and has limited its opponents to 10.5 points per game in Pioneer Football League contests this season. The Toreros haven’t lost a league home game since Oct. 9, 2010, a 21-20 defeat to Dayton. They’ll seek their 26th straight home PFL win on Saturday. The streak began against the Crusaders on Oct. 23, 2010. San Diego ranks No. 1 in all of Division-I FCS in scoring defense, as they’ve yielded just 13.3 points per game this season. Sophomore quarterback Anthony Lawrence, who is the reigning PFL Offensive Freshman of the Year, threw four touchdown passes last week. Senior corner back Jamal Agnew holds the school record for career pass breakups with 42. Jonah Hodges leads the PFL in rushing yards per game (113.5) and rushing touchdowns (10). The Toreros are receiving votes in all three FCS National Polls (STATS, COACHES, HERO SPORTS).

Making Strides: The Valparaiso football program has displayed progress in a number of ways this season. They need one more win for their first three-win conference campaign since the Pioneer Football League championship season of 2003. Valpo already owns a .500 or better record through four league contests for the first time since 2003. Saturday’s win marked a particularly noteworthy turnaround from last season, as Valpo defeated Stetson after falling 37-14 to the Hatters a year ago at Brown Field. The Crusaders need one more victory to match their winningest season under Dave Cecchini.

All the Right Picks: The Crusaders intercepted four passes in last week’s win over Stetson, the first time Valpo had four interceptions in a game since Nov. 15, 2008, a 47-14 victory over Campbell. Drew Snouffer intercepted two passes in the game, a feat most recently accomplished by Kellan Hughes on Sept. 26, 2015 against San Diego. The Crusaders are one of 16 teams in the Division-I FCS nation with 10 or more passes intercepted this season.

Youthful Crusaders: Although Valpo is not as young and inexperienced of a team as it was last season, the Crusaders still have just four seniors on the roster. Marist has the second fewest seniors in the Pioneer Football League with seven, and every other PFL team has at least 12. San Diego has 14, while Campbell and Davidson have the most in the PFL with 19 apiece.

Oh Captain My Captain: Valparaiso enters the 2016 season with three permanent captains: senior defensive back J.J. Nunes, junior wide receiver Frank Catrine and redshirt junior offensive lineman Brian Lang. The Crusaders will also be selecting an individual to serve as game captain for each game as well – against San Diego that will be Tristan De La Rosa.

Extra Tidbits: The Crusaders rank fifth in the Pioneer Football League in total defense, allowing 402.1 yards per game. The last time they finished a season ranked in the top five in the PFL in total defense was 2007… Valpo and Drake are the only teams in the PFL that are perfect on extra points this season. The Crusaders are 21-for-21 on PATs… The Crusaders have a league-most nine fourth-down conversions this season. Meanwhile, they’ve limited the opposition to 4-of-14 on fourth down… Cody Buckrucker had a career-high 25 rushing yards against Stetson. He now has five of the team’s seven rushing touchdowns this season, the most by a Valpo freshman in the last decade… Griffin Norberg had a career-high four receptions against the Hatters… Drew Snouffer’s interceptions against Stetson were the first and second of his Valpo career. Snouffer is tied with Stetson’s Jeb Boudreaux for the most total tackles in the league with 65.