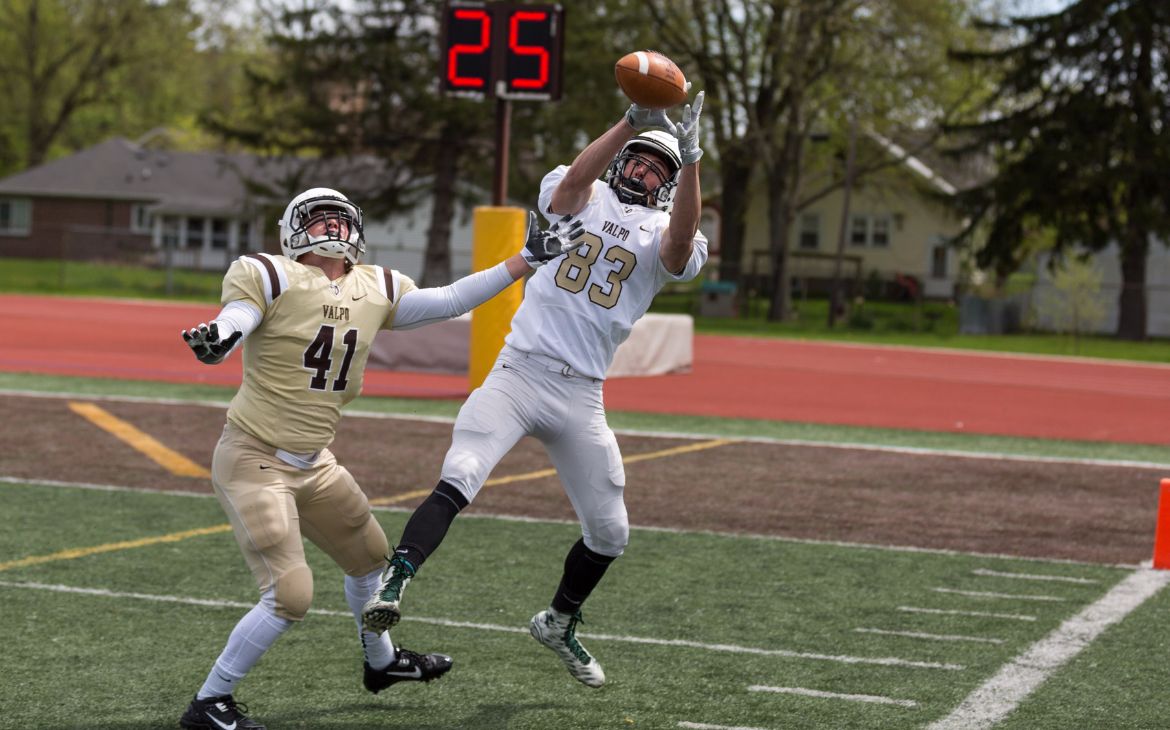 The Valparaiso University football team held its annual Spring Game on Saturday at Brown Field. This year’s format divided the game into three contests pitting the offense against the defense.

Special teams segments were held between each section of the offense vs. defense scrimmage.

First, the two units participated in a fourth down contest, as the offense ran 18 fourth-down plays from various distances with the defense getting one point for each stop and the offense earning one point each conversion. The defense won this portion 14-4. A tipped pass hauled in by Martin Petruf (Hammond, Ind. /  Whiting) for a 20-yard gain was the largest offense play of this segment.

The offense began to heat up in the fifth possession, as Griffin Norberg (Sunrise, Fla. / Western) made consecutive receptions on passes from quarterback Chris Duncan (Woodlands Hills, Calif. / Woodland Hills-Taft). The first catch went for 11 yards, setting up a nine-yard TD hookup. The two-point try was no good, so the offense stood at six points through five possessions.

After the defense prevailed in each of the first two sections, the offense stepped up in the final contest, an offense vs. defense scrimmage with modified scoring. The offense won 21-11.

The defense started strong, scoring three points as Jalin LeAndre (Hollywood, Fla. / Hallandale) and J.J. Nunes (Baltimore, Md. / Baltimore Lutheran) notched interceptions, which were worth three points apiece, building the defense’s lead to 6-0. The defense got another stop on the third drive, making it 8-0 defense.

The offense came to life in Drive 4 as Duncan found Bailey Gessinger (Goshen, Ind. / Northwood) for a 15-yard score to trim the defense’s lead to one at 8-7. The defense inched ahead by forcing a punt to make it 9-7, then Duncan delivered a 10-yard touchdown heave to Norberg and Dimitrios Latsonas (Westmont, Ill. / Westmont) made the PAT to make it 14-9. Prior to the TD grab by Norberg, Frank Catrine (Springsboro, Ohio / Bishop Fenwick) hauled in a 40-yard pass from Duncan.

The next offensive drive stalled as Jordan Goebel (Grand Ledge, Mich. / Grand Ledge) picked up a sack on third and long, cutting offense’s lead to three at 14-11.

The offense wrapped up the win on the final play from scrimmage, as Papenfuss hurled a 19-yard TD pass to Petruf, followed by Elion’s PAT.

The Crusaders will hold their final practice of the spring on Monday. The countdown is on to the kickoff of the 2017 season, which will take place on Saturday, Sept. 2 at Montana. The Brown Field opener will occur on Saturday, Sept. 9 against Duquesne at 1 p.m.