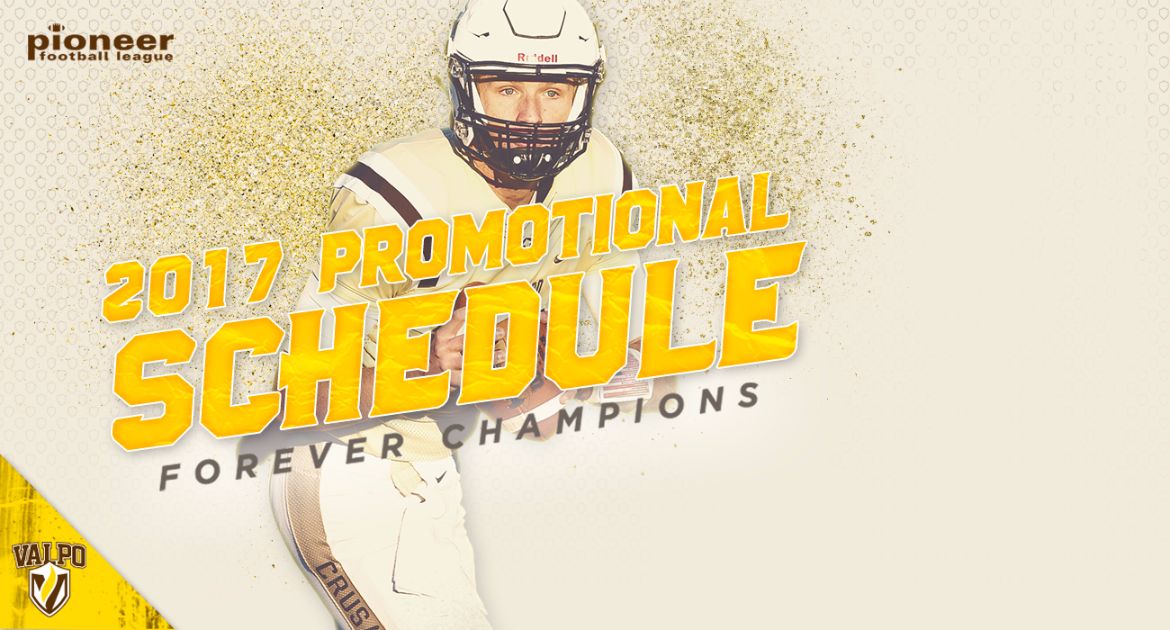 Valparaiso University Athletics has announced an exciting slate of promotions for the 2017 football season, beginning with the home opener on Saturday against Duquesne. All five home games kick off at 1 p.m. CT.

The Crusaders will welcome the Dukes on Popcorn Fest weekend, which will mark the first opportunity for fans to preorder their “219” Dry-Fit Shirts. The “219” Shirt grants the wearer admission to one football, one volleyball, one men’s basketball and one women’s basketball game – a designated “219 Appreciation Day” for each sport. This new promotion allows Valpo, the only Division I institution in Northwest Indiana, to dedicate a specific day to recognizing its local fan base.

The shirt will again be sold at Valpo’s second home game, which will take place on Sept. 30 against Stetson. The matchup between the Crusaders and Hatters is Valpo’s homecoming game and Crusader Fund Day, which will recognize Crusader Fund and President’s Circle members for their contributions to help our student-athletes achieve their best in competition, classroom and community.

When the Crusaders return home to host Marist on Oct. 14, Valpo will hold “219” Appreciation Day, allowing fans to receive free admission by wearing their previously-purchased shirt.

Two weeks later marks a prime opportunity for families to make their way to Brown Field as the Crusaders host Kids Club Day during the Oct. 28 game against Morehead State. Children 12 and under are encouraged to join the Crusader Kids Club for exclusive access to Valpo Athletics. For the price of $50, a child will gain free admission to all football, volleyball and women’s basketball games, along with two men’s basketball games. Each child will receive a membership card and T-shirt, and the child will have a chance to interact with student-athletes in variety of settings. Registration for the Crusader Kids Club is available on valpoathletics.com.

The Kids Club event coincides with the University’s Family Weekend, with activities taking place around campus. After the game, young fans are encouraged to stick around to get a Valpo football poster signed by players in a postgame autograph session.

The home finale will give fans the chance to make an addition to their wardrobes that will help them look just like members of the Valpo coaching staff. The first 1,000 fans will receive a complimentary Valpo visor prior to the Nov. 18 game against Dayton. In addition, seniors 65 and over will receive discounted tickets to that game.

Valpo Athletics has also announced fan information for 2017 football home games. Parking gates open at 9 a.m., while stadium gates open at noon for all games at Brown Field this season. Lot 45 (Athletics-Recreation Center) will be available as a pay to park lot with an entry fee of $5 per vehicle. ADA parking is also available in this lot near the stadium. In addition, a $5 fee will be required to park in Lot 32, which is located next to LeBien Hall.

No fee is required to park in any of the other lots on campus. The lots in the closest proximity to the stadium are Lot 43 (near Guild/Memorial Halls) and Lot 34 (across from LeBien). Both of these lots are within a short walk of Brown Field.

Tickets for Saturday’s game against Duquesne and future Valpo football home games can be purchased by visiting the Ticket Central page on valpoathletics.com.