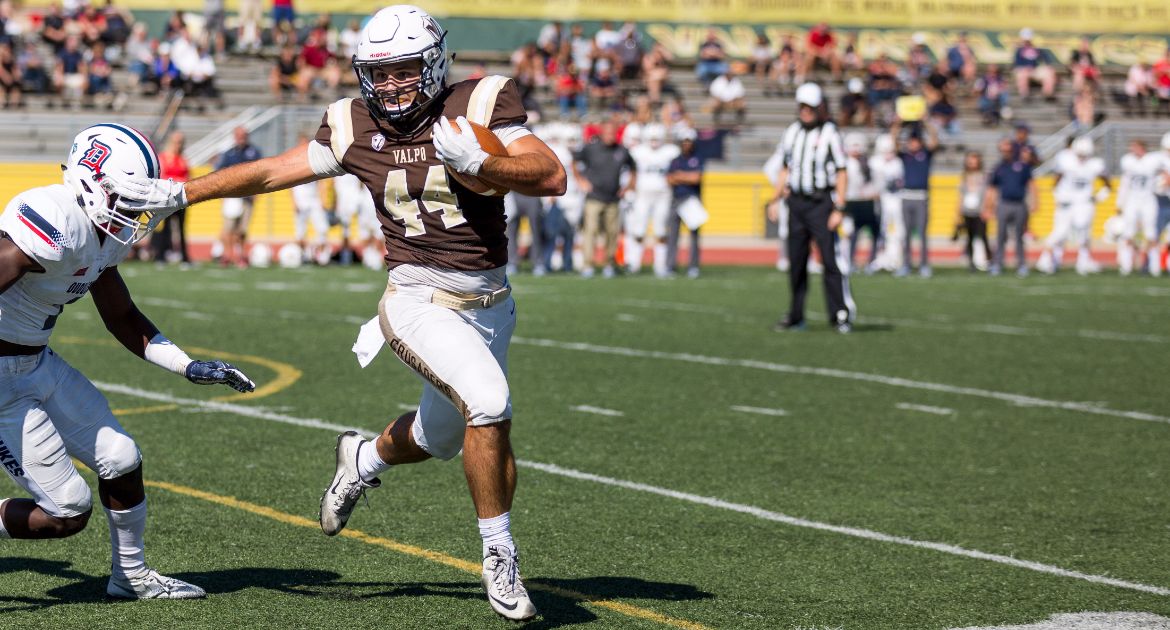 This Week in Crusader Football: Pioneer Football League play will get underway on Saturday as the Valparaiso University football team begins the league slate with a trip to Drake. The Crusaders enter this week with a chance to do something no Valpo football team has done before – earn a win at Drake. They’ll also attempt to spoil Drake’s homecoming game.

Last Time Out: The Crusaders scored on each of their first seven drives and totaled 511 yards of offense in a 44-10 victory over Trinity International. Jarrett Morgan set a career high with 127 rushing yards, while Cody Boxrucker had three touchdown runs and Frank Catrine scored a pair of touchdowns, one through the air and one on the ground. Quarterback Jimmy Seewald added two touchdowns and 238 passing yards to his impressive start to the season.

Following the Crusaders: For the 12th straight season, WVUR (95.1 FM, Valparaiso) is home to all 11 Crusader football games in 2017. Todd Ickow is back for his 27th season as Valpo’s play-by-play broadcaster, while sports information director Brandon Vickrey will add color commentary this week. Links to live audio, video and stats will be available on ValpoAthletics.com.

Head Coach Dave Cecchini: Cecchini is in his fourth season as the head coach of the Crusaders. He enters this game with a 10-26 record, both overall and in three years at Valpo. In his first season as head coach of the Crusaders, Cecchini led the program to a four-win season, its highest win total since 2007. His team matched the four win total in 2016, Cecchini’s third year. Prior to arriving at Valpo, Cecchini served as offensive coordinator/quarterbacks coach at Lehigh for four years.

PFL Openers: The Crusaders will attempt to gain a win in their first Pioneer Football League game of the season for the second straight year. They lifted the lid on PFL play with a 24-20 Brown Field win over Davidson a year ago. A win on Saturday would allow Valpo to start the league slate on a high note for the third time in the last five years.

Series Notes: The Bulldogs hold a commanding 21-3 edge in the all-time series with the Crusaders, a matchup that dates back to 1993. Valpo has dropped 13 consecutive head-to-head meetings. Valpo lost last year’s contest 35-21 despite converting on fourth down five times. Josmar Diaz-Martinez had an interception return for a touchdown in that game. The last win over the Bulldogs came on Oct. 25, 2003, a thriller that saw the eventual PFL champion Crusaders prevail 51-45 in overtime. Valpo is seeking its first ever win at Drake, as it holds an 0-11 all-time record when visiting the Bulldogs.  The only two places in the PFL Valpo has never won are Drake and Marist, and the Crusaders have made just three visits to Marist.

Scouting Drake: The Bulldogs were picked to finish fourth in the PFL preseason poll. They finished third in the league a year ago with their only two defeats coming against the top two teams in the league. However, they lost four First-Team All-PFL selections to graduation – tight end Eric Saubert, running back Conley Wilkins, offensive lineman Aaron Melton and kicker Josh Lee. Quarterback Grant Kraemer is back after ranking third in the PFL with 23 touchdown tosses in 2016, three of which came against Valpo. He has already completed seven TD passes this season and gone 48-of-82 for 649 yards. Head coach Rick Fox is in his fourth season in charge of the program after previously serving as the assistant head coach, offensive line coach and special teams coordinator.  Drake lost its top six receivers to graduation, but Mitch McFarlane is leading the receiving corps this year with 10 catches for 185 yards and three scores. Drake has yet to play a close game, as the Bulldogs suffered lopsided losses to South Dakota (77-7) and No. 4 South Dakota State (51-10) sandwiched around a 55-14 win over Southwestern College (Kan.).

Goal Line Greatness: Sophomore running back Cody Boxrucker continues to thrive in short yardage situations. He notched three rushing touchdowns against Trinity International, boosting his season total to five in just three games and his career total to 12 as only a sophomore. Boxrucker is one of 15 players in the FCS nation who has three rushing TDs in a single game this year and he’s tied for second nationally as one of seven players with five or more rushing scores this season. He became the first Valpo player to rush for three touchdowns in a game since Jake Hutson on Sept. 28, 2013 against Campbell.

From See(wald) to Shining See(wald): Sophomore quarterback Jimmy Seewald leads the PFL and ranks 10th nationally with 839 passing yards this season. He’s averaging 279.7 yards per game, which also leads the league. Seewald has passed for six touchdowns this season and 19 in his career. As only a sophomore, Seewald already has the most career TD passes by a Crusader since Eric Hoffman (2010-13). With his next TD toss, Seewald will become just the second Crusader since 2007 with 20 career TD passes.

Motoring Morgan: Senior Jarrett Morgan shattered a career high with 127 rushing yards on Saturday against Trinity International. He nearly notched a 98-yard TD run, which would have broken a school record that is nearly 60 years old, but was tackled from behind and settled for an 86-yard rush, Valpo’s longest in over a decade. It was also the fourth-longest rushing play in the nation this season. The Valpo senior rushed for the most yards of any PFL player in Week 3. Morgan enters this week’s game at Drake needing 35 rushing yards to hit 1,000 for his career. He would become just the fifth Crusader since 2005 to reach 1,000 career rushing yards and the first since Brandon Hall (2013-15).

Offensive Outbursts: The Crusaders have surpassed 450 yards of offense in three straight games, the first time they’ve done that in the last decade. Valpo ranks first in the PFL and ninth nationally in total offense, averaging 493 yards per game. They’ve played a Montana team that led the Big Sky in total defense last year and a Duquesne squad that ranked 10th nationally and led the Northeast Conference in total defense in 2016.

LG Eric Rentschler – Appeared in every game last season, but in his first year as a starter

RT Alex Cotton – Has started each of the last two weeks

FS Josmar Diaz-Martinez – Has eight career interceptions, the most of any Crusader since 2010

OLB Laddie Skarecky – Made his first career start at TIU

CB Jalin LeAndre – Has started every game this season

DT Jake Trumpower – Has started all three games this season

P Alex Ng – Had his first career rush vs. Duquesne, a gain of four for a first down on a fake punt

K Dimitrios Latsonas – In Week 1, was first Valpo kicker with three FGs in a game since ’08

On the Uptick: The 2016 season marked a significant improvement for the Crusaders, who finished with their highest Pioneer Football League win total since 2003 and equaled their highest overall win total since 2007. The 2016 season concluded in style, as Valpo knocked off Jacksonville 42-39, a team the Crusaders lost to by 45 points the year prior.

Looking Ahead: Next week, it’s the first PFL home contest of the season as Stetson makes its way to Brown Field for Valpo homecoming. The Crusaders will look to top the Hatters for the second straight season.