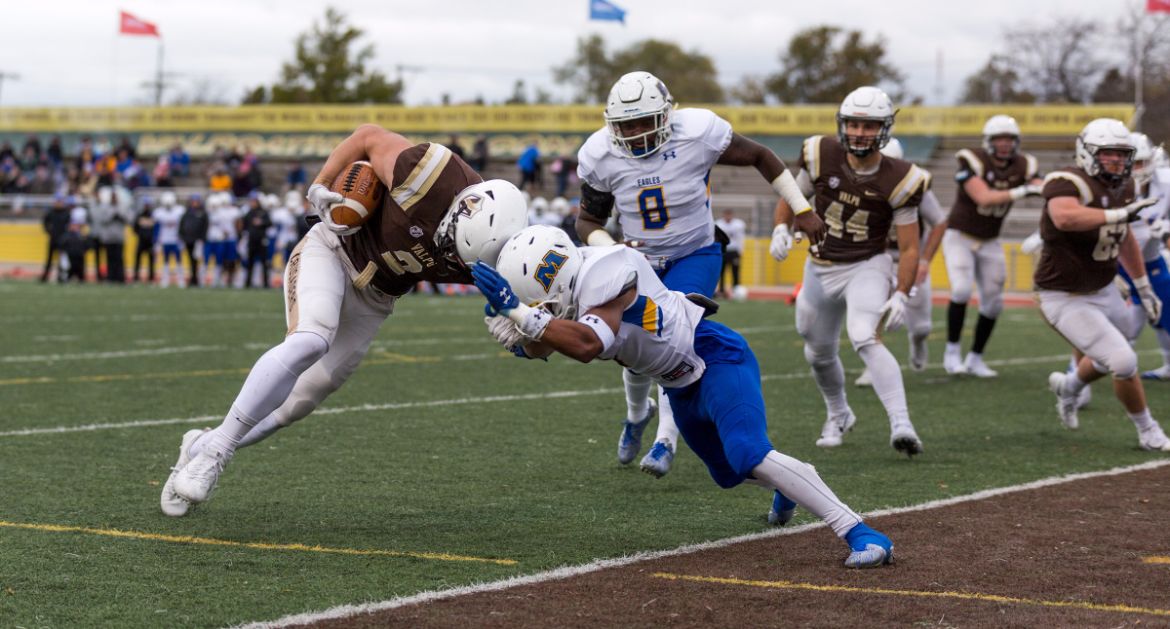 This Week in Crusader Football: The Valparaiso University football team will look to carry its recent home success on to the road with it as the Crusaders travel for the first time since Oct. 7 for Saturday’s game in Jacksonville. Valpo is coming off its most dominant two-game stretch of PFL play ever, scoring 112 points in two games to down Marist and Morehead State at Brown Field.

Following the Crusaders: For the 12th straight season, WVUR (95.1 FM, Valparaiso) is home to all 11 Crusader football games in 2017. Todd Ickow is back for his 27th season as Valpo’s play-by-play broadcaster, while sports information director Brandon Vickrey will provide color commentary this week. The game will also air on ESPN3. Links to live audio, video and stats will be available on ValpoAthletics.com.

Last Time Out: The Crusaders forced six turnovers and racked up 598 yards of offense on their way to a 63-32 victory over Morehead State on Oct. 28 at Brown Field. Austin Petrie made two interceptions and Jimmy Seewald passed for 316 yards and two scores, while Jean Rene, Jarrett Morgan and Griffin Norberg had two touchdowns apiece.

Head Coach Dave Cecchini: Cecchini is in his fourth season as the head coach of the Crusaders. He enters this week with a 13-28 record, both overall and in four years at Valpo. In his first season as head coach of the Crusaders, Cecchini led the program to a four-win season, its highest win total since 2007. His team matched the four win total in 2016, Cecchini’s third year. Prior to arriving at Valpo, Cecchini served as offensive coordinator/quarterbacks coach at Lehigh for four years.

Series Notes: The 2016 meeting between these two teams turned out to be one of the most noteworthy games in recent Valpo football memory, as the Crusaders escaped with a 42-39 win in the season finale at Brown Field. That marked quite the turnaround from the year prior, when the Crusaders fell 58-13 in their most recent trip to Jacksonville. Last year’s win upped Valpo’s all-time record against the Dolphins to 3-6 and helped the Crusaders snap a four-game head-to-head skid that dated back to 2007.

Scouting Jacksonville: The Dolphins, under the direction of second-year head coach Ian Shields, were picked to finish tied for fifth in the PFL Preseason poll. They are third in the league in scoring offense (33.5) and second in total offense (438.2), but rank 10th in the PFL in scoring defense (38.2), in front of only Morehead State. Jacksonville, which runs the triple option, has the top rushing attack in the league, averaging 296 yards per game on the ground, which ranks fourth in the FCS nation. They are last in the league in passing offense at 142.2. Quarterback Rylan Wells is a dual threat who finished last year as the PFL’s second leading rusher among quarterbacks and fifth in total offense. This year, Wells has accumulated 429 yards (53.6 per game) on the ground and has seven rushing scores. Irvin Riley (417) and Keenan Simpson (413) have also been key contributors to the rushing attack. Wells has completed 65 of his 100 pass attempts for 1,073 yards and 10 scores. The Crusaders aren’t the only team coming off a signature win, as the Dolphins knocked off Campbell 54-48 in a triple-overtime thriller last week.

Sunshine State: Trips to Florida are always a homecoming of sorts for a number of Valpo players. This season, 21 Crusaders call Florida home.

Seewald Shines: For the second consecutive game, sophomore quarterback Jimmy Seewald collected Pioneer Football League Offensive Player of the Week recognition. The award was Seewald’s second of the season and the third of his career. Seewald went 14-of-24 passing for 316 yards and a pair of touchdowns to help the Crusaders dispatch Morehead State 63-32. He completed passes to 10 different players and four Crusaders had receptions of 30 yards or more.

Takeaway Time: Among the many glowing statistics from the past two games, the Valpo defense forcing 12 takeaways – six in each contest – is among the most significant. Valpo has made nine interceptions in the last two games – three by Austin Petrie, two by Dilan Scargle and one apiece by Drew Snouffer, Jalin LeAndre, Josmar Diaz-Martinez and Jamari Booker. The Valpo defense has made more interceptions over the last two weeks than it did in any full season from 2010-2014. Scargle and Petrie are the team leaders in interceptions with three apiece. Scargle is the first Valpo freshman with three picks in a year since Diaz-Martinez in 2015. Booker returned his interception for a touchdown, becoming the first Crusader with a pick six this season. Valpo has forced 20 turnovers this year, which ranks ninth nationally. In addition, the Crusaders are seventh in the nation in passes intercepted with 13.

Offensive Explosion: The defense has played a key role the last two games for Valpo, but the offense has certainly done its part as well. The Crusaders have scored 112 points over the last two games, the most the team has scored in a two-game stretch since 1985. To further illustrate the program’s progress – Valpo has scored more points over the last two games than it did the entire 2010 season. Saturday’s 63 points marks the fifth-highest scoring output in program history and Valpo’s highest point total since scoring 66 on Alma in 1996. The Morehead State game on Saturday and the 1996 game against Alma are the only two times Valpo has scored 60 or more points in a game since 1969. The three other games that featured higher point totals came in 1958 against Indiana Central (78), 1920 against Northwestern (85) and 1923 against Lewis (110). Valpo’s 598 yards of total offense against Morehead State just missed the school record of 613, which was set against Alma in 1985. In addition, the Crusaders’ point total against Morehead State is tied for the 14th-highest in the nation this season. Valpo ran for 281 yards, the exact same number they racked up in 2014 against Missouri Baptist, their most recent rushing performance of that caliber.

Defending Brown Field: Valpo has made good use of home field advantage thus far this season. The Crusaders have won four straight PFL home games dating back to last year’s season finale, the program’s first such streak since 1999-2001, when Valpo won five straight league home games. Valpo will finish with a winning record at home for the second consecutive season after going above .500 in games played at Brown Field for the first time since 2004 in 2016. The Crusaders are 3-1 at home this year and the only loss was by five points to scholarship foe Duquesne. The Crusaders have won three PFL home games in the same season for the first time since 2003.

Statistical Leaps: The Crusaders have made several significant statistical leaps this year. Among their most eye-popping numbers are total offense, passing offense and turnover-related defensive categories. Here’s a look at how the team has progressed in the FCS national rankings in select statistical categories over the course of the Dave Cecchini era.

Climbing the Standings: The aforementioned statistical climbs have translated into equal progress in the Pioneer Football League standings. The Crusaders enter this week’s game at Jacksonville tied for fourth with the Dolphins in the 11-team league. Last year Valpo finished tied for seventh, and before that the Crusaders hadn’t finished ahead of more than one team in the standings (excluding teams who vacated wins) since 2003. Valpo is 3-2 in PFL play, their first winning record through five PFL games since the league did away with divisions following the 2005 season. The Crusaders are .500 or better through eight games for the first time since 2007. They have won back-to-back PFL games within the same season for the first time since 2003.

Sacks at a Premium: There are six teams in the nation who are allowing 0.63 sacks per game or fewer, and two of them will face off on Saturday. The Crusaders are tied for third in FCS with 0.63 sacks allowed per game, while Jacksonville leads the FCS nation with 0.50.