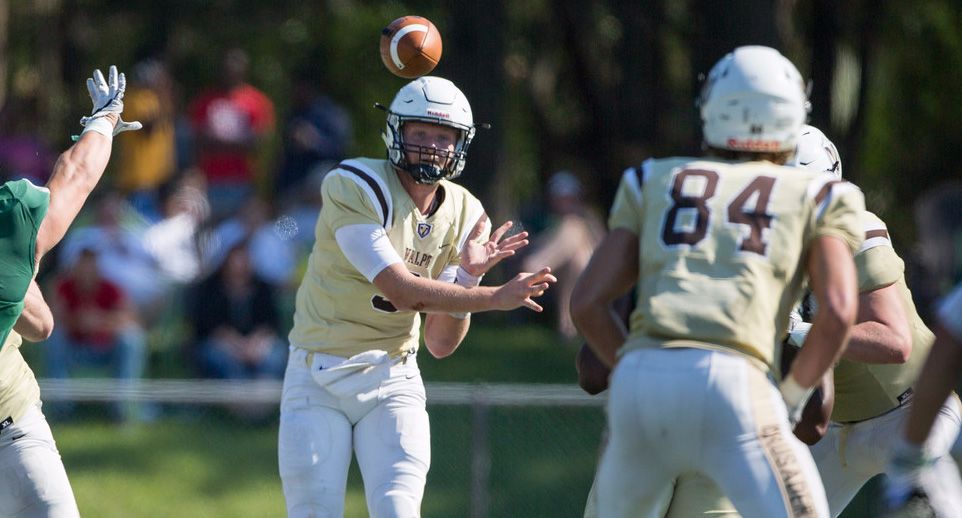 The list of milestones the Valparaiso University football team reached with Saturday’s victory is a lengthy one, but the day can easily be summarized in one sentence that has a nice ring to it: The Hoosier Helmet is coming back to Valparaiso. The Crusaders knocked off rival Butler 36-28 at the Sellick Bowl, in the process reaching five wins for the first time since 2007, notching their fourth league win in a single year for the first time since 1968 and moving within one victory of their first winning season since 2003.

Thoughts on the Game: “Jimmy stepped up and played a huge game for us. We didn’t have the ball much in the first half. Part of that was because they were putting together some time-consuming drives, but part of that was that we were going down field in four or five play drives. Jimmy put the ball on the money and a couple times we came up and made big-time catches as well.”

On the Defense: “The turnovers were significant, and the fourth down stops were huge in this game. They stepped up and didn’t give up many of the big plays. The big fourth-down play action was the only one that cost us. We bent but didn’t break. Those turnovers were huge. We’ve talked so much about turnovers the last few weeks. We got the better of those today.”

On Tristan De La Rosa’s Hustle on Fumble Recovery: “That’s the nature of this rivalry. You’ve got a guy who is tired who pursues and is there to make a play. That really encapsulates this rivalry. This is Butler; this is the Butler game. You’re going to do everything you possibly can to get a win.”

On the Hoosier Helmet Game: “There’s no question it means more. You tell your players to treat all the games equally, and then Butler comes around and you realize you’ve been lying to your team and everybody knows it. This one means more. You kick it into an extra gear. Your entire sideline lives and dies with every play out there. It’s a very competitive game. It’s so amazing to win that trophy and be able to present it to the seniors and celebrate as a validation to all of the hard work our players put in. They don’t do it for the scholarships or because they’re going to the NFL, they do it because they love this game. They represented this school with pride today, and I’m really proud of them.”

The 2017 season comes to a close next week as the Crusaders host Dayton on Senior Day at Brown Field. The kickoff is slated for 1 p.m. CT on Saturday. Links to live coverage of the game will be available on ValpoAthletics.com.