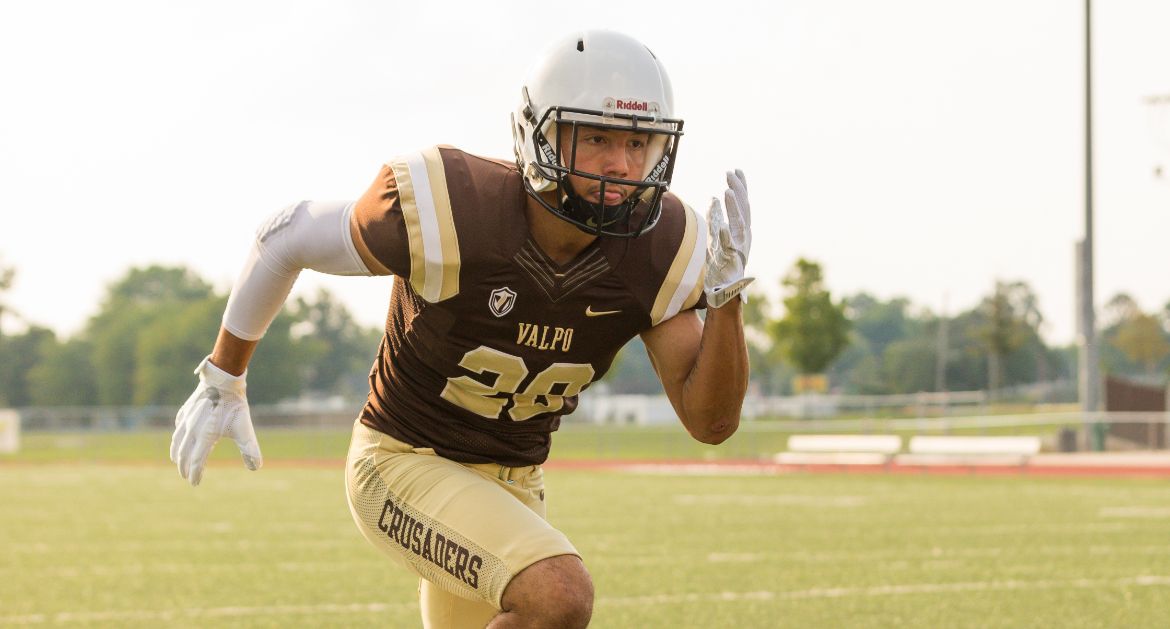 As Valparaiso University football coach Dave Cecchini looked down at his projected two-deep for next week’s season opener at Duquesne, there was something noticeably different from years past.

Quite simply, the Crusaders have experience unlike ever before.

A program that previously relied upon true freshmen to produce right away has no such issue this season, as the two-deep features 11 seniors and 12 redshirt juniors combined between offense and defense. A year ago Valpo had five players in their fourth or fifth year of college football on the two-deep for the opener. In 2016, they had 11 and nine in 2015. This year – 23.

“It’s been a very good camp so far and our injuries have been extremely limited,” Cecchini said. “We do have a very veteran group of players, so we’ve been able to be advanced with installing the offensive and defensive packages. This is the first year that because of our depth, we’re not relying on freshmen to come in and have a significant impact. Several freshmen will play roles for us, but we’re not counting on them to come in and start the first game of the season.”

A year after having eight true freshmen on the Week 1 two-deep and just three years removed from featuring 17 true freshmen on that chart, the Crusaders are expected to have no true freshmen and just one redshirt freshman on the two-deep for next week’s clash with the Dukes. Here’s a position-by-position look at where the squad stands entering the final fall scrimmage on Saturday.

“Jimmy has been taking snaps and has played well in limited action in our first two scrimmages,” Cecchini said. “Chris has made great strides this fall and last spring. After those two, it’s a battle between Trey Bilinski, Joe Mullen and Ben Nimz.”

Bilinski missed time early in camp, but has come on strong since his return. Mullen has shown continued improvement, while Nimz has impressed in scrimmages as a true freshman.

Junior Kyle Cartales (Loxahatchee, Fla. / Cardinal Newman) has enjoyed a strong fall camp and has emerged as the clear starter at the running back position.

Senior Griffin Norberg (Sunrise, Fla. / Western) has enjoyed a strong camp and is expected to be a big part of Valpo’s offense again this season. Ollie Reese (Franklin, Tenn. / Battle Ground) has stepped up and made plays in camp. He is a true freshman who could earn his way on to the field. Senior Jean Rene (Delray Beach, Fla. / Wellington Community) is getting healthier – and Valpo fans are well aware of the impact he can make when at 100 percent.

This group is anchored by center Jack Jarnigan (Los Gatos, Calif. / Los Gatos), a redshirt junior who has plenty of talent and experience around him.

“I’m very satisfied with where we’re at on the offensive line,” Cecchini said. “It’s the most depth we’ve had at those positions in my time here. A lot of these guys have played and started numerous football games for us. They’re a veteran group and physically they are much improved.”

“Defensive line is probably the deepest position on our team right now,” Cecchini said. “We’ve got about nine guys who we feel very comfortable putting into the game.”

Senior Josmar Diaz-Martinez (Miramar, Fla. / Miramar) is the anchor of Valpo’s secondary at a safety position and is one of the most experienced players on the roster.

Jamari Booker (Kentwood, Mich. / East Kentwood) had a good camp and has evolved into a more physical player and strong open-field tackler. At the cornerback slots, Jalin LeAndre (West Park, Fla. / Hallandale) has returned to full strength after being slowed by an injury early in camp. Christian Campbell (South Bend, Ind. / Washington) has rejoined the team after spending the 2017 fall semester away from campus. Campbell and Cam Kelly (Stamford, Conn. / The Brunswick School) have both had extremely strong camps and are vying for starting roles.

Redshirt freshman Kyle Ulbrich (Mentor, Ohio / Mentor) has been one of the pleasant surprises of fall camp.

He is pushing returning starter Alex Ng (Royal Palm Beach, Fla. / Wellington Community) at the punting position and also has the ability to kick, where the Crusaders have Dimitrios Latsonas (Westmont, Ill. / Westmont) back after a productive sophomore season.

Norberg and Haugh are battling for long-snapping duties, while Gessinger will remain the team’s top return specialist.