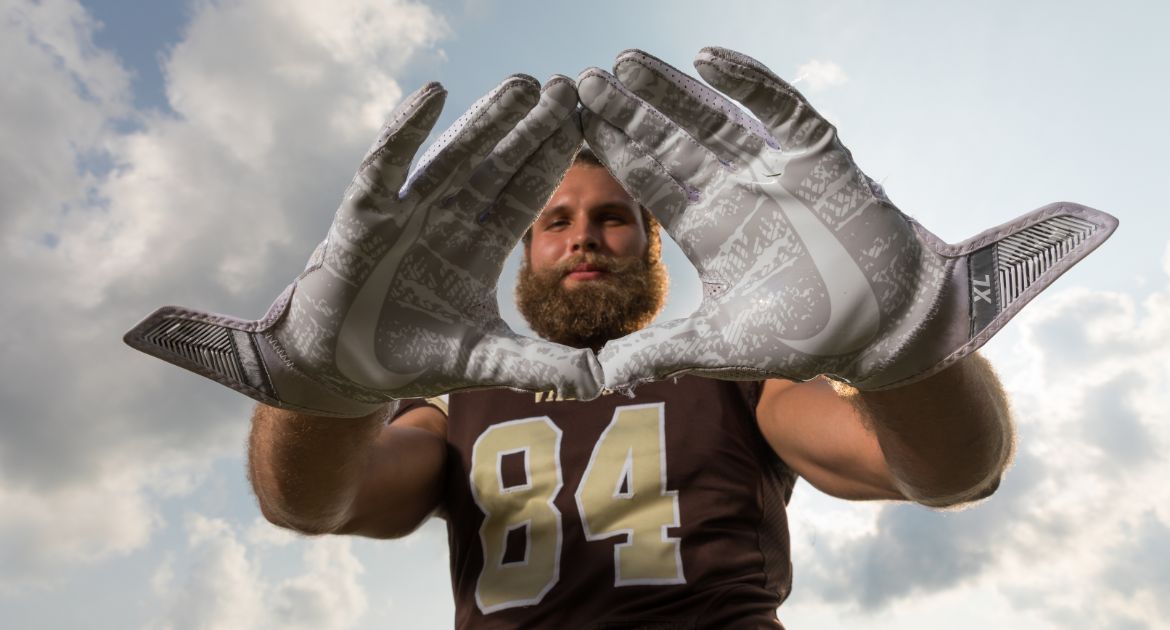 This Week in Valpo Football: Foundation, tradition and legacy return as the Valparaiso University football team kicks off the 2018 season on Saturday. After a Week 1 bye, Valpo will be in action for 11 consecutive weeks starting with a trip to Duquesne. Valpo will look to put together back-to-back winning seasons for the first time since 1999 and 2000.

Last Time Out: We’ve written all the words we can think of to describe Valpo’s most recent football game. By now, most know what happened – nine seniors were sent off in the most poetic way possible with a heart-pounding, gut-wrenching, fingernail-biting and eventually tear-inducing 8-7 win over perennial Pioneer Football League power Dayton. The victory clinched the team’s first winning season since 2003 and came courtesy of a gutsy two-point play that gave Valpo the lead with 1:20 remaining. But now it’s time to turn the page as the players prepare to create new memories in 2018.

Following Valpo Football: For the 13th straight season, WVUR (95.1 FM, Valparaiso) is home to all 11 Valpo football games in 2018. Todd Ickow is back for his 26th season as the team’s play-by-play broadcaster, while sports information director Brandon Vickrey will add color commentary this week. Live video of Saturday’s game will also be available courtesy of NEC Front Row. Links to live video, audio and stats are posted on ValpoAthletics.com.

Head Coach Dave Cecchini: Now in his fifth season as the program’s head coach, Cecchini has lifted Valpo football to new heights during his time in charge, turning a team that had won just three total games in the four seasons prior to his arrival - all against the same opponent - into one that finished with its first winning season since 2003 in 2017. Last year saw the program turn a corner as Valpo went 6-5 overall and 5-3 in Pioneer Football League play. Cecchini became the first Valpo coach since 2003 to earn PFL Coach of the Year honors. He was also named a finalist for the FCS Coach of the Year Award, the AFCA FCS Region 4 Coach of the Year and a finalist for the AFCA FCS National Coach of the Year. Valpo finished tied for third in the league standings after being picked to finish 10th of 11. The Valpo head coach enters the 2018 campaign with a 15-29 record, both overall and in four years on campus. Prior to arriving in Northwest Indiana, Cecchini served as offensive coordinator/quarterbacks coach at Lehigh for four years.

An Experienced Crew: The two-deep for the season’s first game features 11 seniors, 12 redshirt juniors, eight juniors, five redshirt sophomores, 10 sophomores and one redshirt freshman on offense and defense (several positions have three players listed). The 23 seniors and redshirt juniors are the most of the Cecchini Era after Valpo had just five players in their fourth or fifth season of college football a year ago. Only one redshirt freshman and no true freshmen are on the two-deep for a program that is just three years removed from having 17 true freshmen on that chart.

Late Start: The Sept. 8 start date marks the latest opener for Valpo football since 1995, when the team picked up a 41-30 road win over Saint Xavier to begin the campaign. A year from now, Valpo will start the season a full nine days earlier as the team is expected to play in a Thursday night game in Week 1 of the 2019 campaign. While Valpo is getting off to a late start to the season, Duquesne is on the other end of the spectrum. The Dukes competed in the first 2018 NCAA football game on Aug. 25 against FBS foe Massachusetts. A unique aspect of Saturday’s contest is that Duquesne will be playing its third game while Valpo competes in its opener.

Series Notes: This marks the fourth meeting between the two teams with Valpo having dropped each of the first three. The Dukes bested Valpo in 2011 in Pittsburgh and 2012 at Brown Field before the tightest showdown between the two squads took place in the Hoosier State last season. The Dukes held on for a 45-40 win after Valpo fell behind 14-0 through one quarter and could never quite recover from the early deficit. Valpo racked up 511 yards of offense in that game, the first time it had eclipsed 500 yards of offense against a Division I team since Sept. 27, 2014 at Campbell (533). Jimmy Seewald passed for 424 yards, the most by a Valpo quarterback against a Division I opponent since David Macchi’s 452 against Jacksonville in 2003. Parker Fox had an 80-yard reception from Seewald, Valpo’s longest pass completion since 2013.

Scouting Duquesne: The Dukes have been on both ends of one-sided contests thus far this year, falling 63-15 at Massachusetts in the opener before a 45-0 victory over Lock Haven last week. Duquesne has led the NEC in scoring in each of the last three seasons and finished second in the conference in both scoring defense and rushing defense a year ago. Running back A.J. Hines was a member of the All-NEC First Team in each of his first two collegiate seasons. Senior wide receiver Nehari Crawford is also a player to watch after closing out the 2017 regular season as the FCS leader in receiving touchdowns with 15 on his way to all-NEC First Team honors. One name Valpo fans may recognize on Duquesne’s defense is Chris Favoroso, who strangely enough, will play against Valpo in its season opener for the second straight season. Favoroso played for Montana in Valpo’s game against the Grizzlies last year. Another noteworthy transfer the Dukes have added to their starting defense is Kam Carter – a former Pitt defensive lineman who was a star in the Netflix documentary “Last Chance U.”

A Look at the Linebackers: The starting corps of linebackers figures to be an area of strength for Valpo. Only two returning players in the entire PFL surpassed 100 tackles a year ago. Both play their home games at Brown Field – Drew Snouffer and Nick Turner. That duo of Valpo captains became the first pair of Valpo teammates to surpass 100 tackles in the same season since Alex Green and Patrick Derbak in 2013. Turner and Snouffer are joined by fellow senior Mike Wheeler and junior Austin Petrie to form a strong group of starting linebackers. Wheeler, Turner and Snouffer started all 11 games last season and Petrie played in nine and made seven starts. Snouffer has started all 22 games over the last two seasons. This quartet combined for 278 tackles in 2017 and enters the 2018 campaign with a combined 512 career tackles.

Some Love for the Line: Speaking of strengths and areas of experience, the line on both sides is certainly another. On the offensive line, Redshirt juniors Andrew Lundberg and Jack Jarnigan and seniors Eric Rentschler and Tom Schofield are expected to hold four of the starting spots with redshirt junior Terrance Roberts and senior Shannon Taliaferro in the mix for the other starting job. Lundberg, Rentschler, Schofield and Jarnigan have all been consistent fixtures over the last two seasons – missing a combined three games (Lundberg two, Jarnigan one) during that 22-game span. Schofield has started every game over the last two seasons and has played in all 32 games during his collegiate career. Rentschler has played in 25 straight games dating back to his freshman season. On the defense side of the ball, Jesse Studyvin and James Reed are both healthy and poised for starting spots after injury-hampered 2017 seasons. Jake Trumpower has played in 21 out of 22 games over the last two years.

JDM: Speaking of players who have seen a lot of snaps on defense the last three years, senior captain Josmar Diaz-Martinez has been a fixture from Day 1 as a defensive back. He has started 21 consecutive games, played in all 32 games of his collegiate career and made 29 starts.

Kicking Things Off: Junior kicker Dimitrios Latsonas placed his name in the Valpo record book with his performance in 2017. His 11 made field goals tied for fourth in program history, while his 35 successful PATs established a single-season Valpo record. He also tied the single-game record for made PATs with seven against Morehead State on Oct. 28. In addition, Latsonas booted 10 touchbacks on kickoffs.