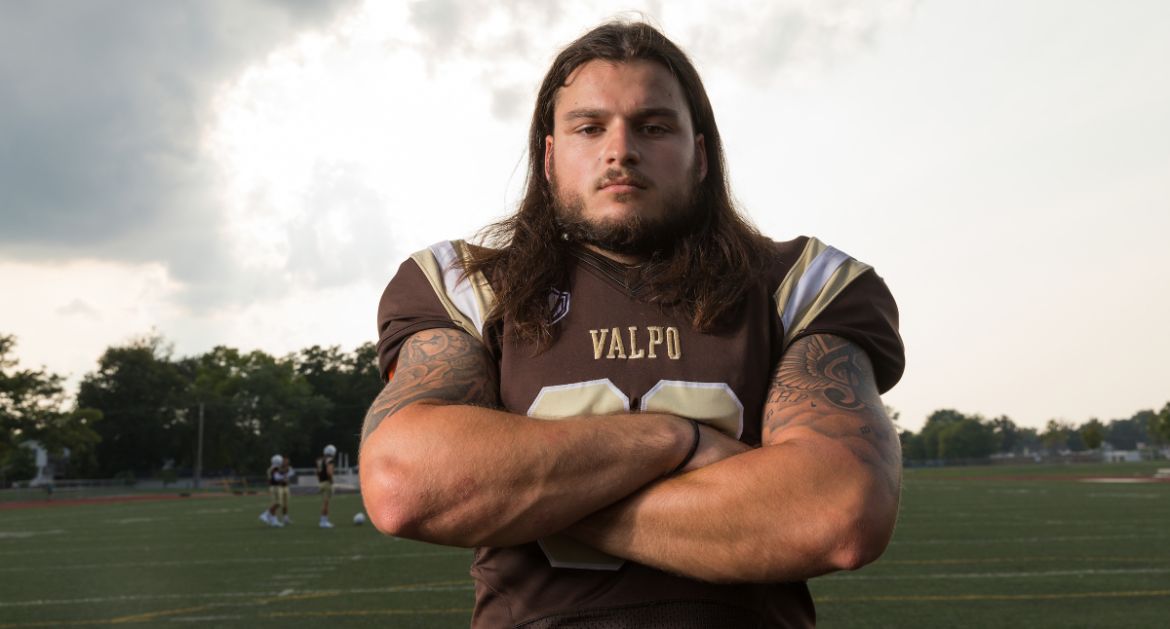 This Week in Valpo Football: The Valparaiso University football team faces another challenging road test this week as Youngstown State – a team ranked nationally in the FCS preseason that reached the national championship game in 2016 – stands between Valpo and leveling its record at 1-1. Valpo is coming off a solid showing in its season opener, falling 23-21 in what would have been a signature road win at Duquesne.

Last Time Out: Valpo took a 21-17 lead on the first play of the fourth quarter as Griffin Norberg scored a 58-yard touchdown on a pass from Chris Duncan, but Duquesne scored to regain the lead with 2:42 remaining and held on for the two-point win. Valpo also owned the lead in the first half after a pair of 1-yard TD runs by Kyle Cartales made it 14-7, but Duquesne tied it with a field goal prior to halftime and regained the lead on a third-quarter field goal in a back-and-forth affair.

Following Valpo Football: For the 13th straight season, WVUR (95.1 FM, Valparaiso) is home to all 11 Valpo football games in 2018. Todd Ickow is back for his 26th season as the team’s play-by-play broadcaster, while sports information director Brandon Vickrey will add color commentary this week. Live video of Saturday’s game will also be available on ESPN+ courtesy of Youngstown State Athletics. Links to live video, audio and stats are posted on ValpoAthletics.com.

Head Coach Dave Cecchini: Now in his fifth season as the program’s head coach, Cecchini has lifted Valpo football to new heights during his time in charge, turning a team that had won just three total games in the four seasons prior to his arrival - all against the same opponent - into one that finished with its first winning season since 2003 in 2017. Last year saw the program turn a corner as Valpo went 6-5 overall and 5-3 in Pioneer Football League play. Cecchini became the first Valpo coach since 2003 to earn PFL Coach of the Year honors. He was also named a finalist for the FCS Coach of the Year Award, the AFCA FCS Region 4 Coach of the Year and a finalist for the AFCA FCS National Coach of the Year. Valpo finished tied for third in the league standings after being picked to finish 10th of 11. The Valpo head coach enters this week with a 15-30 record, both overall and in four plus years on campus. Prior to arriving in Northwest Indiana, Cecchini served as offensive coordinator/quarterbacks coach at Lehigh for four years.

Keeping It Close: Although Valpo coaches, players and fans alike were disappointed in the outcome of the season opener at Duquense, the progress of the program against scholarship Division-I opponents remains evident. Valpo, a member of the non-scholarship Pioneer Football League, has given the opposing team a scare in each of its last three games against Division-I scholarship competition. Comparing the results of those three contests to the program’s previous 13 contests against those opponents helps illustrate the program’s progress.

Close Call: Saturday’s game at Duquesne was Valpo’s first loss by two points or fewer since Oct. 25, 2014, a 48-47 defeat at Morehead State. Valpo has played in more games decided by five points or fewer since the start of the 2016 season (8) than it had over the previous five seasons combined (7).

Breaking Even: Valpo has played back-to-back games that were tied at halftime – 14-14 in the 2018 opener at Duquesne and scoreless in the 2017 finale against Dayton. Before this two game stretch, Valpo had gone 39 straight games without being tied at the intermission, dating back to a 10-10 deadlock after one half of head coach Dave Cecchini’s first league game on Sept. 27, 2014 at Campbell.

Duncan Debut: Although he saw time under center as a redshirt freshman in 2017, Chris Duncan made his first career start last week at Duquesne. He completed 15 of his 26 pass attempts for 229 yards and a touchdown. The TD pass was the third of his career, while the 229 passing yards marked a new personal best. Duncan has thrived in challenging road environments, as his three games over 100 passing yards were last week at Duquesne, last season at Montana (150 yards and two TDs) and last season at Campbell (119 yards).

He’s Back: After being away from campus during the 2017 fall semester for personal reasons, Christian Campbell made his presence known in his return to the team on Saturday at Duquesne. He made an interception in the end zone, thwarting a quality Duquesne scoring chance. That was the fourth career interception for Campbell, second on the team among active players behind only Josmar Diaz-Martinez, who has nine. Diaz-Martinez’s next interception will make him the first Valpo player with 10 in a career since at least 2005.

Specialist Stats: With his two punt returns on Saturday, Bailey Gessinger now has 22 for his career – one away from Kyle Himmelwright’s 23 for the most by a Valpo player since 2005. Gessinger has 158 punt return yards, five behind Himmelwright for the program’s second-highest total since 2005. Gessinger already has the most kick returns since at least 2005 with 64 and ranks second in kick return yards with 1,446 during that time. Punter Kyle Ulbrich averaged 42.7 yards per punt on Saturday, the second-best single-game average in the PFL this season.

Other Standouts in Pittsburgh: Austin Petrie turned in a career-high 10 tackles in the game against the Dukes, while Drew Snouffer led the team with 11 tackles, seven of them solos. Griffin Norberg had his eighth career receiving touchdown and thrived in his second-straight season opener with 97 receiving yards this year at Duquesne after a career-high 104 last season at Montana. Kyle Cartales had two rushing touchdowns, lifting his career total from three to five. Tight end Mason Sutter had four receptions, matching Norberg for the team lead in that area.

Series Notes: Valpo and the Penguins will face off for just the third time, with the two prior meetings coming in Youngstown in 2011 and 2012, prior to the start of Dave Cecchini’s head coaching tenure. Youngstown State prevailed in lopsided fashion, beating Valpo 77-13 in 2011 and 59-0 in 2012.

Scouting Youngstown State: A recognizable name is at the helm of the Youngstown State football program as Bo Pelini enters his fourth season as the head coach. He spent nine years as a defensive assistant in the NFL and was on staff for a Super Bowl Champion (San Francisco) and a BSC National Champion (LSU). He has coached in 12 bowl games, 11 NFL playoff games and six conference-title contests. He spent seven years as the head coach at Nebraska. The president of Youngstown State University is former Ohio State head coach Jim Tressel. Valpo will oppose a Youngstown State team that is just two years removed from reaching the FCS National Championship game and has made seven FCS title game appearances. LB Armand Dellovade, TB Tevin McCaster, C Vitas Hrynikiewicz, OG Gavin Wiggins and LS Steven Wethli have all been named to the Missouri Valley Football Conference’s preseason all-league first team. McCaster is on the STATS FCS Preseason All-American second-team, while Wiggins, Wethli and Dellovade were third-team picks. The Penguins are coming off a 52-17 loss at No. 14 West Virginia. They have also played a Pioneer Football League team this season, falling 23-21 to Butler in Week 1. Both Valpo and Youngstown State lost their seasons openers by that exact score. Youngstown State quarterback Montgomery VanGorder started his collegiate career with four years at Notre Dame before coming to the Penguins this season as a graduate transfer.

Against The Valley: This will mark Valpo’s third game against a Missouri Valley Football Conference opponent during Dave Cecchini’s time as head coach. Valpo dropped the first game of the Cecchini Era at Western Illinois 45-6 in 2014 before starting the 2016 season with a 50-13 loss to Illinois State. Over the last decade, Valpo is 0-5 against the MVFC and has been outscored 276-32 in those games.

An Experienced Crew: The two-deep for the season’s first game featured 11 seniors, 12 redshirt juniors, eight juniors, five redshirt sophomores, 10 sophomores and one redshirt freshman on offense and defense (several positions have three players listed). The 23 seniors and redshirt juniors are the most of the Cecchini Era after Valpo had just five players in their fourth or fifth season of college football a year ago. Only one redshirt freshman and no true freshmen are on the two-deep for a program that is just three years removed from having 17 true freshmen on that chart.

A Look at the Linebackers: The starting corps of linebackers figures to be an area of strength for Valpo. Only two returning players in the entire PFL surpassed 100 tackles a year ago. Both play their home games at Brown Field – Drew Snouffer and Nick Turner. That duo of Valpo captains became the first pair of Valpo teammates to surpass 100 tackles in the same season since Alex Green and Patrick Derbak in 2013. Turner and Snouffer are joined by fellow senior Mike Wheeler and junior Austin Petrie to form a strong group of starting linebackers. Wheeler, Turner and Snouffer started all 11 games last season and Petrie played in nine and made seven starts. Snouffer has started all 22 games over the last two seasons. This quartet combined for 278 tackles in 2017 and enters the 2018 campaign with a combined 512 career tackles.

Some Love for the Line: Speaking of strengths and areas of experience, the line on both sides is certainly another. On the offensive line, Redshirt juniors Andrew Lundberg and Jack Jarnigan and seniors Eric Rentschler and Tom Schofield hold four of the starting spots with redshirt junior Terrance Roberts and senior Shannon Taliaferro both seeing time at right tackle. Lundberg, Rentschler, Schofield and Jarnigan have all been consistent fixtures since the start of the 2016 season – missing a combined three games (Lundberg two, Jarnigan one) during that 23-game span. Schofield has started every game since the start of 2016 and has played in all 33 games during his collegiate career. Rentschler has played in 26 straight games dating back to his freshman season.

JDM: Speaking of players who have seen a lot of snaps on defense the last three years, senior captain Josmar Diaz-Martinez has been a fixture from Day 1 as a defensive back. He has started 22 consecutive games, played in all 33 games of his collegiate career and made 30 starts.

Kicking Things Off: Junior kicker Dimitrios Latsonas placed his name in the Valpo record book with his performance in 2017. His 11 made field goals tied for fourth in program history, while his 35 successful PATs established a single-season Valpo record. He also tied the single-game record for made PATs with seven against Morehead State on Oct. 28. In addition, Latsonas booted 10 touchbacks on kickoffs