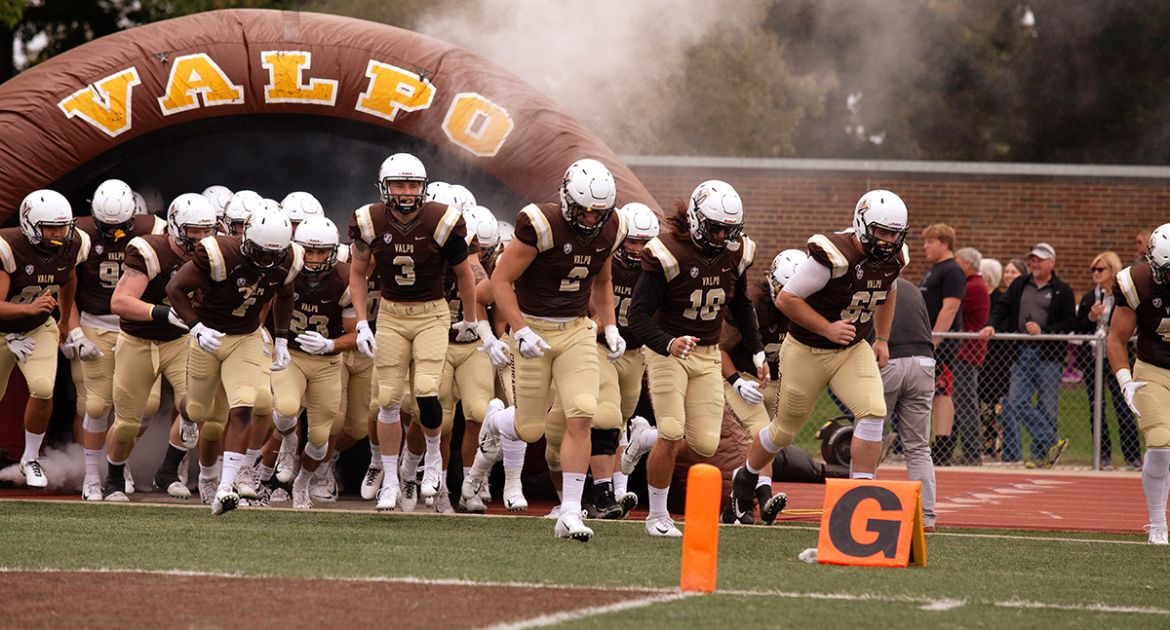 The Valparaiso University football team scored touchdowns on its first three drives of the game as part of a high-scoring affair at Brown Field in front of a large homecoming crowd on Saturday afternoon. However, visiting Davidson kept pace early before eventually recording a late, go-ahead score to head home with a 40-35 win.

“This was obviously not the outcome we were hoping for. It was a disappointing game with a lot of bright moments. It’s one that we certainly could have won, but I don’t think we earned a victory today. Sometimes a close game like this comes down to a bad call or a bad bounce, but that wasn’t the case today.”

“As crazy of a back-and-forth game as it was, in the end our defense had an opportunity to make a stop with the lead after doing a great job for most of the second half and we failed to do so. Our offense had an opportunity to drive down and win the football game, and as well as we played most of the game offensively, we didn’t do that either. In the fourth-quarter of a hard-fought game, that’s what it all comes down to. Championship teams are going to step up in those moments and make championship plays and we failed to do that at the end of the fourth quarter. We’re disappointed.”

“It’s rough to give up two two-minute drill touchdowns in the game to a triple-option team. They are very talented, but usually two-minute drills are not the forte of triple option offenses, and we gave up two of those today. Our defense did an incredible job of digging deep. Coach (Ernest) Moore changed some things up at halftime. Our players competed and did not quit and I give them credit for that on the defensive side of the ball after such a frustrating first-half of football. In the second half, we played the way we thought we were capable of playing the whole game defensively. On the offensive side of the ball, we came out early in the game and played as clean of football as we have all year. It was nice to see Jimmy get in a rhythm. Unfortunately, as the game progressed, we couldn’t keep up the level of consistency that we needed to in order to maintain and expand the lead once we had our first lead of the game.”

“There were certainly a lot of bright spots, but overall we’re very disappointed with today’s outcome. Our football team is going to need one giant gut check to right this ship and get ourselves a big win next week at Dayton.”

Valpo will hit the road next week to visit the Flyers for a game that begins at noon Central Time. The rematch of last year’s dramatic season finale will be broadcast on 95.1 FM Valparaiso with Todd Ickow and Brandon Vickrey on the call. There will also be a Facebook Live video stream on the NCAA FCS Facebook Page. Links to live video, audio and stats will be available on ValpoAthletics.com.