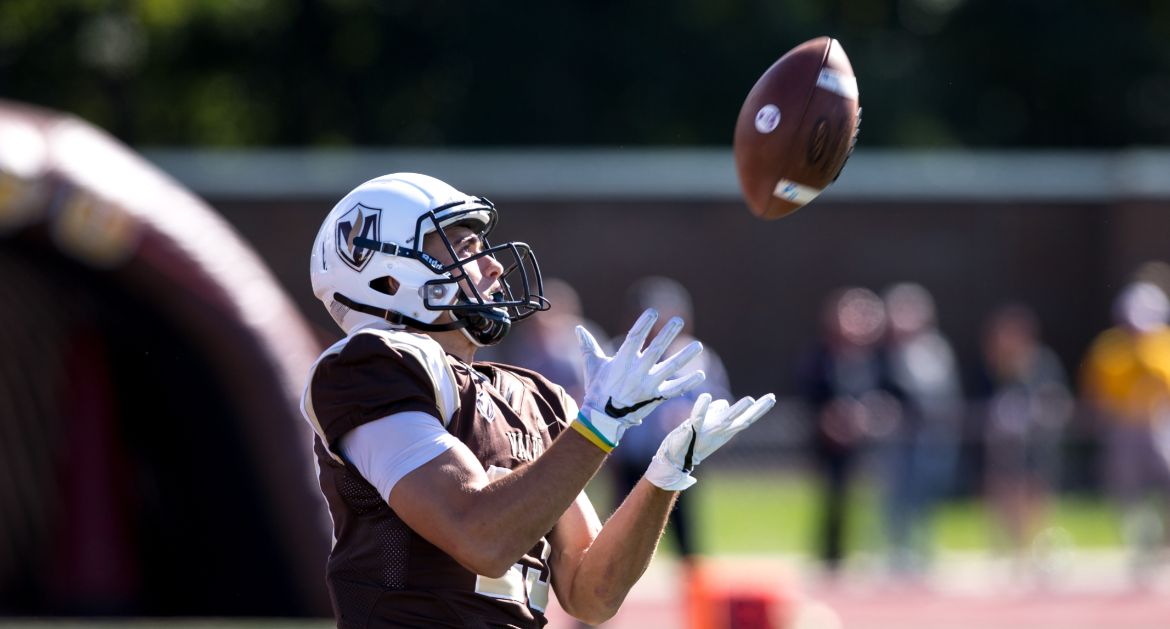 This Week in Valpo Football: The Valparaiso University football team will look to win back-to-back meetings with Dayton for the first time in program history on Saturday afternoon as the two teams resume a matchup that dates all the way back to 1988. Valpo is ready to embrace a strong challenge against one of the PFL’s perennial powers on Saturday as the team seeks its second ever win in Dayton and first since 2003.

Last Time Out: Valpo fell to Davidson 40-35 in the team’s PFL opener and homecoming game last week at Brown Field. The first seven drives of the game all resulted in touchdowns before the game shifted to a defensive battle in the second half. The Valpo defense turned it around and allowed just six points after halftime, but that was enough as the go-ahead score came with 56 seconds left to put the Wildcats back on top. Quarterbacks Jimmy Seewald (12-of-20, 160) and Chris Duncan (6-of-8, 100) both passed for 100+ yards while Griffin Norberg had four receptions for 102 yards and one touchdown. Jean Rene hauled in two touchdown passes, while Jamari Booker led the defense with 20 tackles.

Following Valpo Football: Saturday’s game will be streamed via Facebook Live on the NCAA FCS Facebook page. Alex Mikos and Jared Phillips will have the call. On Valpo radio, Todd Ickow (play-by-play) is back for his 26th season, while Sports Information Director Brandon Vickrey adds color commentary this week. For the 13th straight year, WVUR (95.1 FM, Valparaiso) is home to all 11 Valpo football games in 2018. Links to live video, audio and stats will be available on ValpoAthletics.com.

Head Coach Dave Cecchini: Now in his fifth season as the program’s head coach, Cecchini has lifted Valpo football to new heights during his time in charge, turning a team that had won just three total games in the four seasons prior to his arrival - all against the same opponent - into one that finished with its first winning season since 2003 in 2017. Last year saw the program turn a corner as Valpo went 6-5 overall and 5-3 in Pioneer Football League play. Cecchini became the first Valpo coach since 2003 to earn PFL Coach of the Year honors. He was also named a finalist for the FCS Coach of the Year Award, the AFCA FCS Region 4 Coach of the Year and a finalist for the AFCA FCS National Coach of the Year. Valpo finished tied for third in the league standings after being picked to finish 10th of 11. The Valpo head coach enters this week with a 15-33 record, both overall and in four plus years on campus. Prior to arriving in Northwest Indiana, Cecchini served as offensive coordinator/quarterbacks coach at Lehigh for four years.

Series Notes: The all-time series? That’s heavily slanted in Dayton’s favor with the Flyers having won 24 of 27. But the recent past? That’s where Valpo owns bragging rights after using a go-ahead two-point conversion to beat Dayton 8-7 in the 2017 season finale, in the process clinching their first winning season since 2003 and sending the Flyers to their second losing season in the last 41 years. Senior Jarrett Morgan plunged into the end zone from one yard out to make it 7-6 Dayton with 1:20 to go, then Morgan – a running back – threw a jump pass to senior quarterback-turned-tight end Ryan Clarke, who hauled it in to put Valpo up 8-7. Valpo is 1-13 all-time at Dayton and on Saturday will attempt to snap a skid of seven straight losses in Dayton since a 33-28 win on Oct. 11, 2003. This matchup has occurred every year since 1993, and a win on Saturday would allow Valpo to beat the Flyers in consecutive seasons for the first time.

Scouting Dayton: Dayton finds itself in a similar position to Valpo in the sense that both teams are trying to recover from a loss last week. The Flyers, who were picked second in the PFL preseason poll behind only San Diego, fell 28-17 at Marist. Dayton running back Tucker Yinger is third in the league with 107.2 rushing yards per game and has scored five touchdowns. Quarterback Jack Cook is third in the league with 199.6 passing yards per game and has thrown for seven touchdowns. Valpo and Dayton have a pair of common opponents – the Flyers lost 31-26 at Duquesne but beat Davidson 42-21. Dayton is under the direction of 11th-year head coach Rick Chamberlin, who is the winningest coach in PFL history. Dayton is one of 19 NCAA FCS programs with more than 600 all-time victories. Seven Flyers were named to the Preseason All-PFL team, the most of any school. Nobody else had more than four.

20 for 20: Valpo defensive back Jamari Booker, who wears jersey No. 20, racked up 20 tackles in last week’s game against Davidson, enjoying Valpo’s first 20-tackle game since at least 2001. He had the PFL’s highest single-game tackle output since Carlos Merritt of Campbell also had 20 on Oct. 28, 2017 and no PFL player has had more than 20 since 2014. In addition, Booker is one of five players in the FCS nation with 20 tackles or more in a single game this season.

73 on the Reception: Valpo offensive lineman Tom Schofield made a reception on a deflected pass for a gain of nine yards that went for a first down last week against Davidson. Schofield became the first Valpo lineman to catch a pass since Kyle Padgett on Nov. 22, 2003. Padgett’s reception went for a loss of three yards in an eventual 54-42 win over Morehead State in the PFL Championship game. Schofield has started every game since the start of 2016 and has played in all 36 games during his collegiate career.

Big-Play Machine: Valpo senior Griffin Norberg holds the impressive distinction of having three touchdown catches of 58 yards or more this season. He has accomplished that feat in three of the four games this year.

Offensive Efficiency: Last week against Davidson, Valpo scored touchdowns on five of its 10 possessions. Furthermore, one of the five drives that did not result in a Valpo touchdown began with 10 seconds left in the first half and was halted by halftime, while another began with 51 seconds left in the second half. Valpo had only one turnover, two punts and one turnover on downs. For perspective on how Valpo performed on offense last week, here’s a look comparing drive results from that game to those of previous games this season along with Valpo’s two best offensive performances from 2017.

An Experienced Crew: The two-deep for the season’s first game featured 11 seniors, 12 redshirt juniors, eight juniors, five redshirt sophomores, 10 sophomores and one redshirt freshman on offense and defense (several positions have three players listed). The 23 seniors and redshirt juniors are the most of the Cecchini Era after Valpo had just five players in their fourth or fifth season of college football a year ago. Only one redshirt freshman and no true freshmen are on the two-deep for a program that is just three years removed from having 17 true freshmen on that chart.