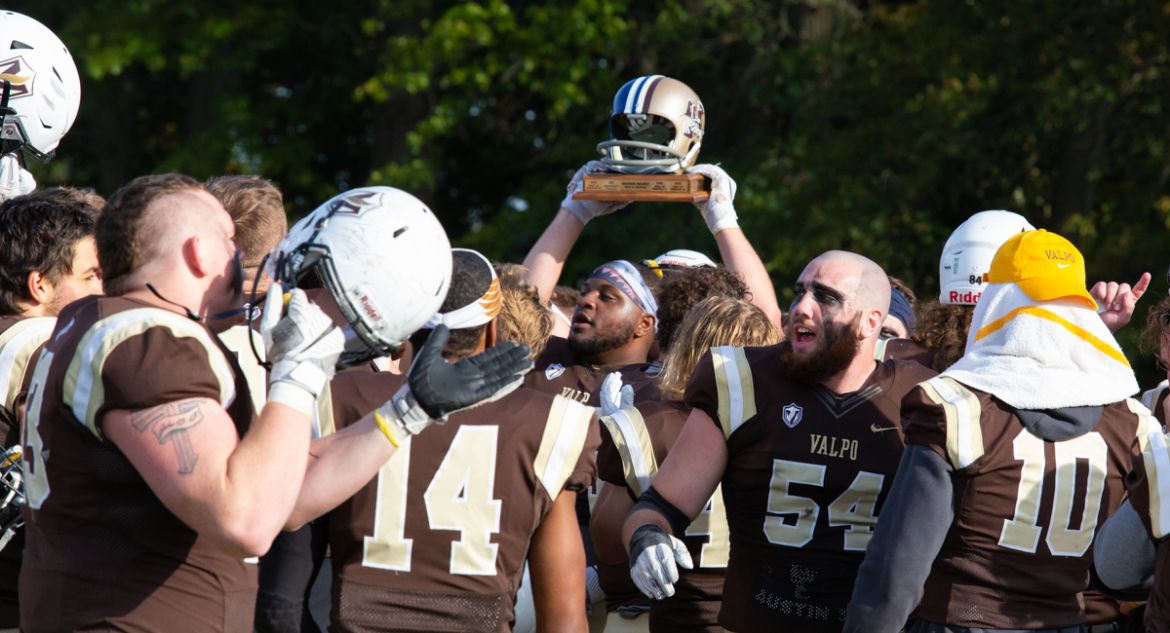 For the first time since 2005, Valpo has won the Hoosier Helmet in consecutive seasons.
BUTLER at Valparaiso | October 13, 2018
Related Links
Related Links

The Valparaiso University football team picked an opportune time for its most complete performance of the season on Saturday afternoon at Brown Field.

The Hoosier Helmet will remain in Northwest Indiana for another year as Valpo put together a quality showing in all three phases to dispatch rival Butler 35-17. The smiles were numerous following the game as a team that has battled through injuries and adversity soaked up a moment of joy by celebrating with the rivalry trophy and continuing the long-standing tradition of ringing the Victory Bell to signify a win.

“Obviously, this was an incredible win. It’s great to see our team come out and play the way they did. It was an incredible day; we talked last night about needing to step up and make critical plays. One of the things we had failed to do all year was get off the field on third down and convert on third down when our offense was on the field. Our defense stepped up huge today time and time again. We had our best day of the year in terms of third-down conversions, and on offense we were 14-of-18 on third downs. That’s an incredible feeling to have that level of confidence, particularly at the end of the game when they knew we had to run the football to run the clock out, and we were able to do that successfully.”

“Today was also huge from a turnover perspective and we picked an outstanding time to step up and make plays with both Michael Scarsella and Matt Messler’s interceptions in the fourth quarter. We stepped up and made plays that we hadn’t made in prior weeks.”

“I want to recognize Tom (Schofield) and our offensive line. Tom is a guy who has been playing football for four years here and offensive line is about as anonymous as you can get out on the football field. Tom was able to get some recognition this past year being voted second-team all-conference. He’s done a great job all year for us and the last four years. We’ve got a lot of guys like Tom who don’t get a lot of recognition that they deserve, and we have four other offensive lineman who stepped up huge today. At the end of that game to be able to move the line of scrimmage the way that we did and the way that we were able to finish drives on the goal line, the offensive line did an outstanding job. We have some running backs who can make plays, and they get all the glory and the quarterbacks get all the glory, but it starts up front and our players made plays, not just our marquee players, but some of the guys who stepped up on special teams in their first meaningful football as well as guys like Tom, who have been here for four years.”

“I’d like to send a message out to Alex Ng, our starting punter and holder. He got the call early in the week and he wasn’t able to be with us for this game because his father is currently going through a really tough time. Our prayers go out to Alex, who is back in Florida where he should be. I know he wishes he was here, but we certainly wish him and his father nothing but the best.”

Valpo (1-5, 1-2) will look to climb to .500 in PFL play with next week’s visit to Morehead State. The game will kick off at 1 p.m. CT and will be available on ESPN+ in addition to 95.1FM Valparaiso. Links to live video, audio and stats are available on ValpoAthletics.com.