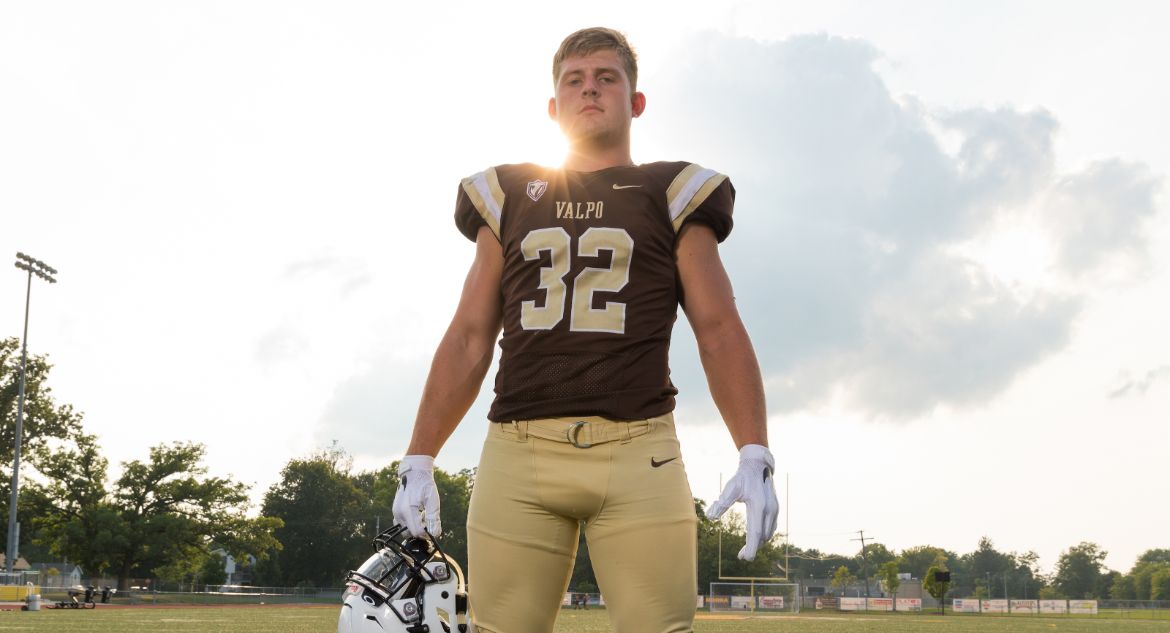 This Week in Valpo Football: The Valparaiso University football team will look to make it back-to-back wins this week as the team hits the road to face off with Morehead State. A victory would also give Valpo consecutive head-to-head wins for the first time in an all-time series that dates back to 1996. It’s homecoming weekend for the host Eagles – an event Valpo certainly wouldn’t mind spoiling with a victory.

Last Time Out: The Hoosier Helmet rivalry trophy will remain in Porter County for another 12 months after last week’s 35-17 win over Butler. Valpo started strong and finished strong – playing its best quarter of the year in the first before outdoing the opening-quarter performance in the fourth. Valpo outscored its guests from Indianapolis 14-0 in each of those periods to pave the way for a 35-17 victory. Valpo held Butler to 301 yards of total offense and went an eye-popping 14-of-18 on third down.

Following Valpo Football: This week’s game will air on ESPN+, which is available for subscribers for the price of $4.99 per month. If the hometown call is what you covet, the Todd Ickow description will be available on 95.1 FM Valparaiso, the TuneIn Radio App and online via TuneIn. Sports Information Director Brandon Vickrey will join Todd for the call. For the 13th straight year, WVUR (95.1 FM, Valparaiso) is home to all 11 Valpo football games in 2018. Links to live video, audio and stats will be available on ValpoAthletics.com.

Head Coach Dave Cecchini: Now in his fifth season as the program’s head coach, Cecchini has lifted Valpo football to new heights during his time in charge, turning a team that had won just three total games in the four seasons prior to his arrival - all against the same opponent - into one that finished with its first winning season since 2003 in 2017. Last year saw the program turn a corner as Valpo went 6-5 overall and 5-3 in Pioneer Football League play. Cecchini became the first Valpo coach since 2003 to earn PFL Coach of the Year honors. He was also named a finalist for the FCS Coach of the Year Award, the AFCA FCS Region 4 Coach of the Year and a finalist for the AFCA FCS National Coach of the Year. Valpo finished tied for third in the league standings after being picked to finish 10th of 11. The Valpo head coach enters this week with a 16-34 record, both overall and in four plus years on campus. Prior to arriving in Northwest Indiana, Cecchini served as offensive coordinator/quarterbacks coach at Lehigh for four years.

Series Notes: The Eagles own a commanding 19-4 lead in the all-time series, but Valpo snapped a streak of 10 straight head-to-head losses with a lopsided 63-32 win over Morehead State last season. Before breaking through in 2017, Valpo had led with less than three minutes remaining in each of the previous three meetings, but Morehead State had pulled out victories. Valpo has lost five straight in Morehead, Ky. dating back to Sept. 16, 2006, a 42-35 victory. Valpo is 2-8 all-time at Morehead State. Last year’s win at Brown Field saw Valpo rack up 597 yards of offense and post its highest scoring output since 1996.

Gessinger’s Gone: When the second half of last week’s game against Butler got underway, perhaps the game’s biggest play happened in a hurry. It took 12 seconds, to be exact, for return specialist Bailey Gessinger to take the kickoff 97 yards for a touchdown to snap a 14-14 tie and give Vapo a lead it would not relinquish. It probably also took around 12 seconds for the Pioneer Football League to decide its Special Teams Player of the Week as Gessinger garnered the honor, becoming the first Valpo player to win a weekly award this season. Of all the big plays that contributed to the win against Butler – and there were many – Gessinger’s may have been the biggest. The kickoff return for a TD was the third of his career after he became the first player in program history with two kickoff returns for TDs in a single season in 2015, his freshman campaign. Gessinger is one of 15 players in the FCS nation with a kickoff return of 97 yards or more this season. It was the longest kick return by a PFL player since Marist’s Lawrence Dickens went 100 yards on Nov. 7, 2015 vs. Stetson.

Nifty 50: Last week’s game against Butler was Dave Cecchini’s 50th as the team’s head coach. The victory allowed him to become Valpo’s winningest coach through the first 50 games of his tenure since Bill Koch coached his 50th game on Sept. 18, 1982 at Wisconsin-Eau Claire.

Rivalry Win: Valpo has won the Hoosier Helmet back-to-back seasons for the first time since the 2004 and 2005 campaigns. In Dave Cecchini’s five seasons as head coach, Valpo now holds a 3-2 record against Butler. The 18-point win was Valpo’s largest margin of victory in the instate rivalry game since Oct. 14, 2000, when head coach Tom Horne’s bunch came out on top 33-7.

Next Man Up: With the Valpo defense plagued by injuries last week against Butler, redshirt junior Matthew Messler and freshman Michael Scarsella both made their first career starts memorable ones. Messler made a critical interception with 6:54 remaining in the fourth quarter and returned it all the way to the Butler 2, before Scarsella’s pick sealed the deal with 5:26 to go. Valpo has five interceptions as a team this season, led by Christian Campbell with two.

Boxrucker Barreling In: Last week against Butler, Valpo junior Cody Boxrucker had three rushing TDs in a single game for the second straight season after he did so against Trinity International last year. He became the first Valpo player to rush for three touchdowns in a game against a Division-I opponent since Jake Hutson on Sept. 28, 2013 against Campbell. Boxrucker is up to 17 career rushing touchdowns.

Scouting Morehead State: Morehead State went on the road and picked up a 35-28 win over Davidson last week, snapping an eight-game road losing streak. Senior quarterback Lawson Page is the lone QB in the FCS nation with multiple games this season with 200+ passing yards and 100+ rushing yards. Redshirt freshman running back Jovan Smith, a Louisville transfer, is seventh among freshman rushers in the FCS nation at 68.7 yards per game. The Eagles, picked to finish seventh in the PFL Preseason Poll, are led by Rob Tenyer, who is in his sixth year as the team’s head coach. Morehead State started PFL play with a 24-21 loss to Butler on Sept. 29 before a 51-34 defeat to league-leading San Diego on Oct. 6.