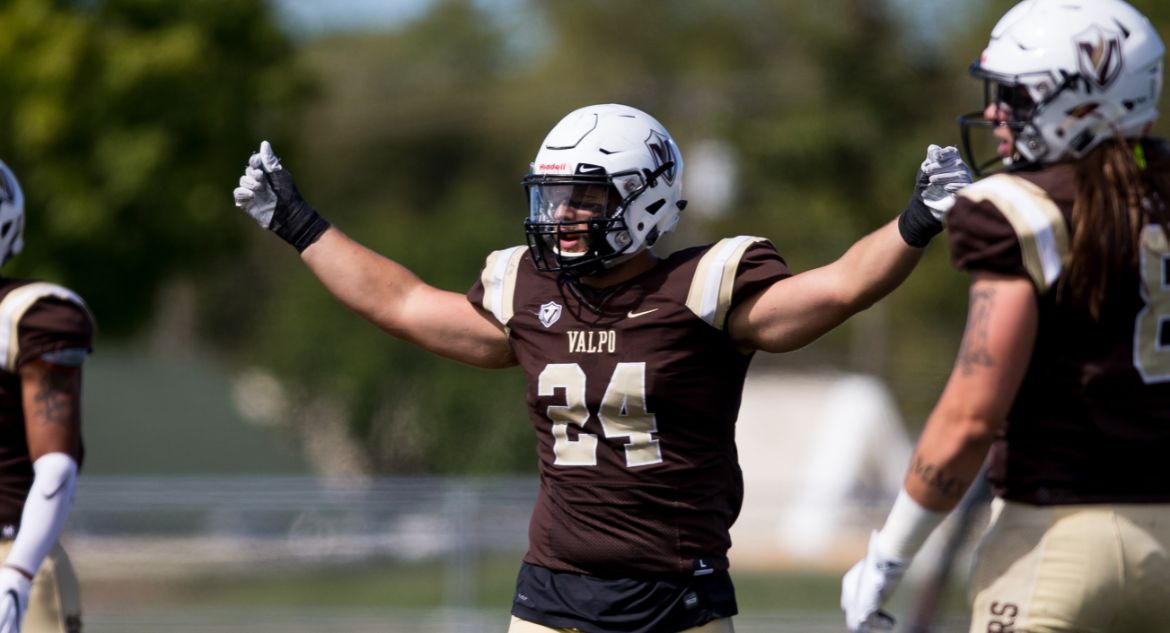 Drew Snouffer had a fumble recovery, an interception return for a touchdown, a sack and a team-high 13 tackles on Saturday.
Valparaiso at Morehead State | October 20, 2018

Facing a 17-point deficit with 10 minutes to play, the Valparaiso University football team knew it had a tall mountain to climb on Saturday at Morehead State. Valpo nearly climbed that mountain, cutting the deficit down to seven and had the ball with 1:15 remaining, but the effort came up just short as the Eagles made a game-sealing interception in the final minute of a 31-24 win.

“Their quarterback played well. We did a solid job on defense. Drew’s interception return for a touchdown really sparked our football team. We weren’t perfect, and we’ve got to continue to work on our pass rush. With a young defensive backfield, it was inevitable to allow some of those big plays. Finding ways to get more pressure on the quarterback is something we need to address as coaches and figure out going forward.”

“We had to use two timeouts on substitutions, but that’s because we are trying to get healthy bodies on defense. We got caught with 12 once and had to call two timeouts because we had 10. Normally, that’s inexcusable at this point in the year, but the group that’s out there is not the one that started the season. Guys are trying their best, and we’re moving guys from one position to another to try to stay healthy.”

“You’re banged up pretty much every season right around this time, and unfortunately we are even more banged up than we normally would be at this point in the season. We’ll have to address our depth at several positions tomorrow and it’s our job to find 11 healthy bodies on each side of the ball who can go out and help us win a football game against Drake next week.”

“We know that every game is going to be a battle with a chance to win football games. One of the long-term benefits when you have to play guys like Scarsella is that it’s valuable experience that will pay off for those players down the road. We still have a lot of good football left in us this season, and we’re going to go out and try to win every game.”

Valpo (1-6, 1-3) will return home next week for a date with Drake. The game will kick off at 1 p.m. CT and will be available on ESPN+ in addition to 95.1FM Valparaiso. Links to live video, audio and stats are available on ValpoAthletics.com.