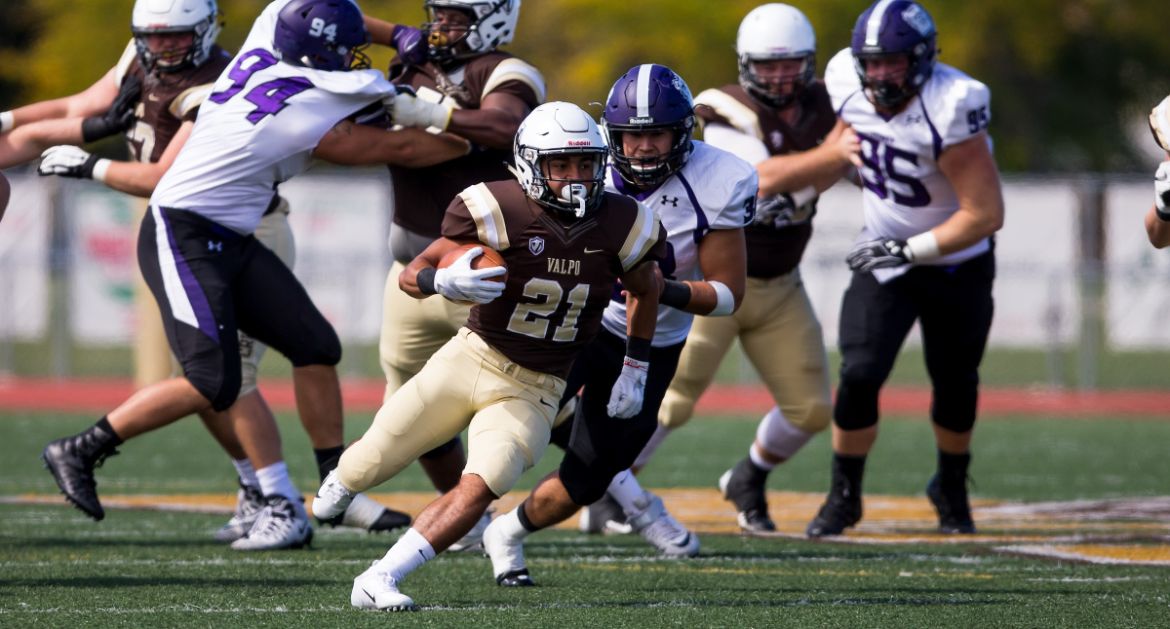 This Week in Valpo Football: The Valparaiso University football team will return to its home field this week as the Drake Bulldogs come to town for a Pioneer Football League showdown. Valpo had a five-game home PFL winning streak snapped in this year’s PFL opener against Davidson, but started a new home streak in the most recent home game against rival Butler. A win on Saturday would move Valpo to within one victory of securing a winning home record for the third straight season.

Last Time Out: For the third time this season, Valpo fell just shy in a game decided by seven points or fewer. A 93-yard kickoff return for a  touchdown by Bailey Gessinger, a fumble recovery by Drew Snouffer and an on-side kick recovery all contributed to Valpo’s valiant comeback effort in the final 10 minutes, but the host Eagles held on for a 31-24 win. Snouffer’s fumble recovery was part of a big day that also included a 40-yard interception return for a touchdown, a sack and a team-high 13 tackles.

Following Valpo Football: This week’s game will air on ESPN+, which is available for subscribers for the price of $4.99 per month. Todd Ickow and Dave Huseman will describe the action. For the 13th straight year, WVUR (95.1 FM, Valparaiso) is home to all 11 Valpo football games in 2018. Links to live video, audio and stats will be available on ValpoAthletics.com.

Head Coach Dave Cecchini: Now in his fifth season as the program’s head coach, Cecchini has lifted Valpo football to new heights during his time in charge, turning a team that had won just three total games in the four seasons prior to his arrival - all against the same opponent - into one that finished with its first winning season since 2003 in 2017. Last year saw the program turn a corner as Valpo went 6-5 overall and 5-3 in Pioneer Football League play. Cecchini became the first Valpo coach since 2003 to earn PFL Coach of the Year honors. He was also named a finalist for the FCS Coach of the Year Award, the AFCA FCS Region 4 Coach of the Year and a finalist for the AFCA FCS National Coach of the Year. Valpo finished tied for third in the league standings after being picked to finish 10th of 11. The Valpo head coach enters this week with a 16-35 record, both overall and in four plus years on campus. Prior to arriving in Northwest Indiana, Cecchini served as offensive coordinator/quarterbacks coach at Lehigh for four years.

Series Notes: The all-time series is tilted in Drake’s favor 22-3 in a matchup that dates back to 1993. Valpo ended a number of long skids in 2017, but the head-to-head losing streak against the Bulldogs wasn’t one of them. Drake captured its 14th consecutive win over Valpo with a 38-13 victory in Des Moines. Valpo’s last win in the all-time set came on Oct. 25, 2003, a thriller that saw the eventual PFL champions prevail 51-45 in overtime.

Putting the Special in Special Teams: The last two weeks have certainly been special for Valpo return specialist Bailey Gessinger. A kickoff return for a touchdown of over 90 yards? That’s rare enough. But to do it back-to-back weeks? That’s almost unheard of. After starting the second half of the Oct. 13 game against Butler with a 97-yard kickoff return for a touchdown, Gessinger had a return for 93 yards and a score in the fourth quarter of last week’s game at Morehead State. Gessinger tied his own program record for kickoff return TDs in a single season, matching his mark of two set as a freshman in 2016. Furthermore, Gessinger’s most recent kickoff return for a TD came in the same location as his first as he had an 89-yard kickoff return for a TD on Oct. 1, 2016 at Morehead State. He finished with 153 return yards against the Eagles, the 16th-most nationally in a single game this season. Gessinger is one of four players in FCS with two kickoff returns for touchdowns this season, joining Isaac Foster (Kennesaw State), Malik Wilson (N.C. A&T) and Jimmie Robinson (Bethune-Cookman). Gessinger has four career kickoff returns for touchdowns, one shy of tying the Pioneer Football League record set by Butler’s Ryan Zimpleman (1998-2000).

Drew Dominant Defensively: Drew Snouffer has had many big days during his time in a Valpo uniform, but last week may very well have been the biggest. He had a 40-yard interception return for a touchdown, a key fumble recovery, a sack and a team-high 13 tackles in the game at Morehead State. The pick six was the first of his career and the first by a Valpo player since Jamari Booker had one last season, also against the Eagles. Snouffer has had at least one fumble recovery and at least one interception in each of the last three seasons. He leads the PFL in tackles at 11.4 per game and has 80 total tackles this year. His 11.4 tackles per game are tied for fifth nationally in FCS.

On-Side Kick Success: Valpo kept its comeback effort alive with a late on-side kick recovery last week at Morehead State. Valpo joined Jacksonville and Butler as PFL teams with an on-side kick recovery this season. This marked the first time under Dave Cecchini Valpo pulled off a successful on-side kick (previously 0-for-4). In fact, Valpo was 0-for-11 on on-side kick tries since the start of the 2008 season prior to last week’s recovery.

Fourth Quarter Outburst: Valpo scored 17 points in the fourth quarter last week at Morehead State, the highest single-quarter scoring output this season. Valpo last scored 17 points in a quarter on Nov. 11, 2017 at Butler with a 17-point first. Last week marked the most points scored in the fourth quarter by Valpo since Sept. 14, 2013, when the team scored 21 fourth-quarter points in a 36-34 loss to William Jewell.

Battling the Injury Bug: Injuries have been a major obstacle for Valpo football this season. If the hosts want to knock off Drake on Saturday, they will have to do so with a shorthanded squad. Valpo finished last week’s game at Morehead State with five regular starters and two key reserves on defense all sidelined in addition to being without the team’s starting running back due to an injury and starting punter for family reasons.

Scouting Drake: Drake boasts the top defense in the league as the Bulldogs are allowing just 19.2 points per game and 281.3 yards per contest. Senior quarterback Grant Kraemer is second in the league with 264 passing yards per game. Steven Doran (87.3 receiving yards per game) and Devin Cates (54.8) are the team’s top two receivers, while Drew Lauer (47.2 yards per game) is the top tailback on a team that ranks last in the league in rushing. Kicker Danny Donley is 6-for-6 on field goals this season, while Kieran Severa is the team’s leading tackler with 7.2 per contest. The Bulldogs, led by fifth-year head coach Rick Fox, are one of three teams nationally with four or more blocked punts this year. Drake has won six Pioneer Football League titles, most recently securing back-to-back league championships in 2011 and 2012. This year, the Bulldogs have league wins over Jacksonville (41-9), Butler (36-6) and Dayton (28-17), but fell to Stetson (23-21).

Battling the Bulldogs: This marks the third time in the first four home games of the season that Valpo will host a team known as the Bulldogs. Valpo has also welcomed Truman State and Butler to Brown Field in 2018.