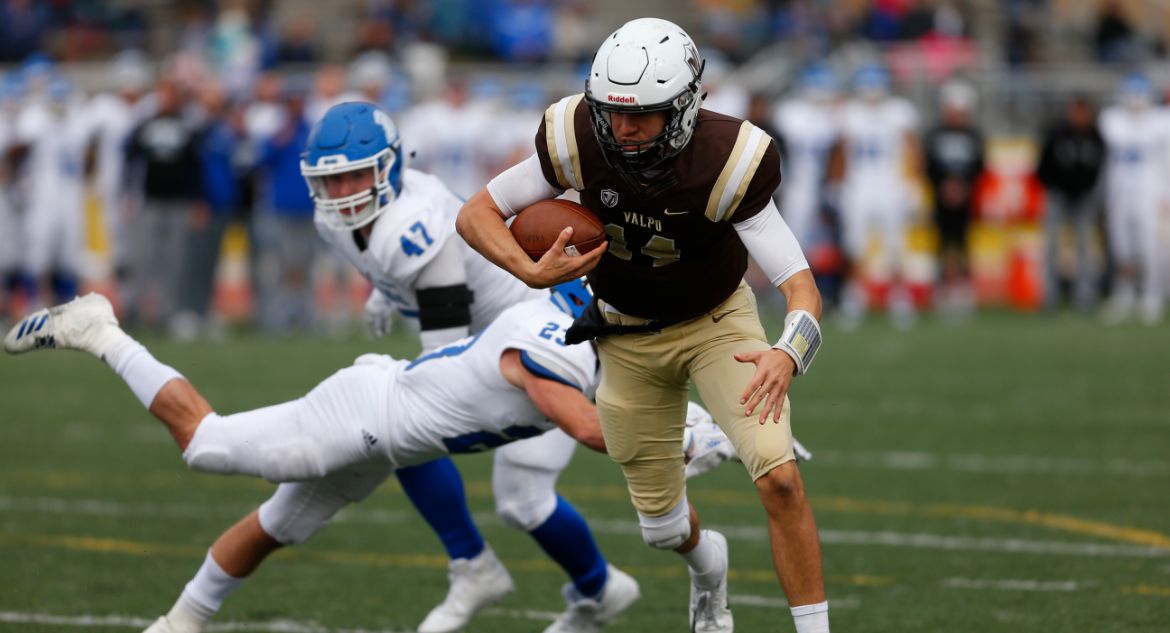 This Week in Valpo Football: The Valparaiso University football team will attempt to get back in the win column with a long trip to Poughkeepsie to take on Pioneer Football League title contender Marist on Saturday. The Red Foxes enter this week locked in a three-way tie for second in the PFL standings and just one game behind league-leading San Diego.

Last Time Out: An injury-plagued Valpo team fell 42-25 to Drake, a team that is continuing its annual tradition of being in the Pioneer Football League title mix late in the season. Valpo scored twice within two minutes, 20 seconds in the fourth quarter to cut a 25-point deficit to 10, but could get no closer. Quarterback Chris Duncan threw for a career-high 302 yards while completing three touchdown passes, also a career watermark. Senior tight end Mason Sutter had a career high of his own with 96 receiving yards on six catches, while Griffin Norberg had a team-high seven grabs for 96 yards. Austin Petrie was involved in three sacks (one solo, two ½ sacks), while Drew Snouffer led the way in tackles with 15.

Following Valpo Football: This week’s game can be seen on the Red Fox Network or heard on 95.1 FM Valparaiso with Todd Ickow and Brandon Vickrey on the call. Links to live video, audio and stats will be available on ValpoAthletics.com.

Head Coach Dave Cecchini: Now in his fifth season as the program’s head coach, Cecchini has lifted Valpo football to new heights during his time in charge, turning a team that had won just three total games in the four seasons prior to his arrival - all against the same opponent - into one that finished with its first winning season since 2003 in 2017. Last year saw the program turn a corner as Valpo went 6-5 overall and 5-3 in Pioneer Football League play. Cecchini became the first Valpo coach since 2003 to earn PFL Coach of the Year honors. He was also named a finalist for the FCS Coach of the Year Award, the AFCA FCS Region 4 Coach of the Year and a finalist for the AFCA FCS National Coach of the Year. Valpo finished tied for third in the league standings after being picked to finish 10th of 11. The Valpo head coach enters this week with a 16-36 record, both overall and in four plus years on campus. Prior to arriving in Northwest Indiana, Cecchini served as offensive coordinator/quarterbacks coach at Lehigh for four years.

Series Notes: Last year’s game between these two teams at Brown Field is one that won’t soon be forgotten. The game was disrupted by a pair of lightning delays that totaled three hours, 36 minutes. The contest kicked off at 1:04 p.m. and didn’t reach its completion until 7:07 p.m., but it was worth the wait for Valpo, which notched a 49-15 victory. Valpo had scored a total of 28 points in the six prior meetings with Marist before the offensive outburst that saw Valpo enjoy a 34-point margin of victory, its largest in a league game since Nov. 6, 1971. The Red Foxes lead the all-time series 6-1. Entering Saturday, Marist is one of two active PFL locations where Valpo has never notched a victory (along with Drake) as the team is 0-3 in Poughkeepsie. This will mark the first time Valpo has visited Marist since a 37-0 loss on Oct. 5, 2013. This will be Valpo’s first game at Marist of the Cecchini Era – the final active PFL venue the current coaching staff has never visited. Valpo will look to reverse its fortunes at Marist, where it has been outscored 91-7 over three games.

Packed with Sacks: The Valpo defense racked up four sacks on Saturday against Drake, more than the team had in the first seven games of the season combined. That marked the most sacks Valpo has had in a single game since having five on Oct. 26, 2013, also against Drake. Austin Petrie was involved in three sacks and totaled 2.0 (one solo, two 1/2), the most by a Valpo player in a single game since John Guilford had 2.5 on Oct. 17, 2015 against Dayton.

Punting Point: The Valpo defense forced a quality Drake offense into seven punts on Saturday at Brown Field. That was the most punts by a Valpo opponent since Dayton punted seven times against Valpo in the 2017 season finale, an 8-7 Valpo victory. It was also the most times Drake has punted this season and the most by the Bulldogs in a game since Oct. 28, 2017 against Davidson (eight).

Passing Performance: Quarterback Chris Duncan eclipsed 300 passing yards for the first time in his collegiate career last week against Drake, finishing with 302. Valpo passed for 311 yards in the game, a team watermark this season and the most since Oct. 28, 2017 vs. Morehead State (316).

Scouting Marist: The Red Foxes carry a three-game winning streak with them into this week’s game after stringing together wins over Jacksonville (20-17), Davidson (48-41 OT) and Morehead State (48-21). Marist will have a tough final two weeks of the season, traveling to Drake on Nov. 10 before hosting San Diego on Nov. 17. Marist allows 28.1 points per game, tied for second in the league in scoring defense. The star player for the Red Foxes is wide receiver Juston Christian, who ranks third in the league at 115 receiving yards per game. Quarterback Austin Day is averaging 245 passing yards per game and has thrown nine touchdown passes in his three appearances. The team’s running backs thrived in last week’s win over Morehead State as Mekhai Johnson ran for 170 yards and Darryn Jordan accumulated 101 yards on the ground. Marist head coach Jim Parady is in his 27th season. Marist was picked to finish seventh in the PFL Preseason poll, but has exceeded expectations as one of four PFL teams with only one league loss. The only defeat came by five points at Stetson in the first week of league play against a Hatter team that has also been a surprise – currently tied for second after being picked ninth.

Battling the Injury Bug: Injuries have been a major obstacle for Valpo football this season. When Valpo sent its four captains out for the coin toss on Saturday last week, only one was in uniform with the others sidelined by injuries. Last week, Valpo played without seven players that would be starters and had another starter exit with an injury.