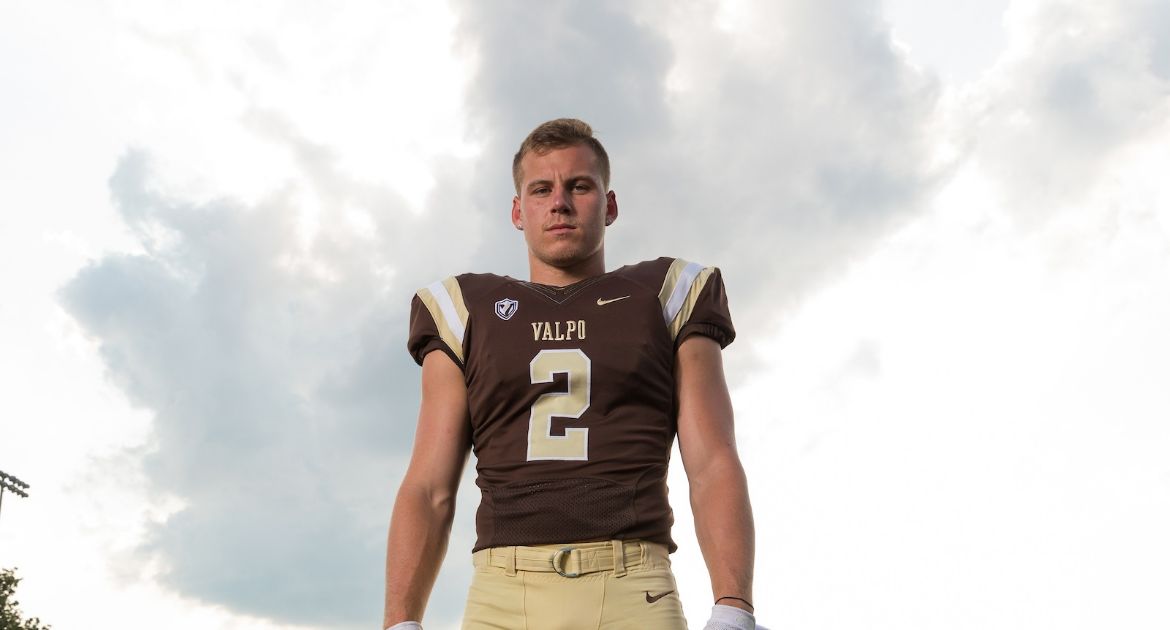 This Week in Valpo Football: This week is all about the seniors for the Valparaiso University football team as the program attempts to send a class that was instrumental in Valpo’s successful 2017 season out on a high note. It’s Senior Day at Brown Field and the 2018 home finale as the Brown & Gold welcome Jacksonville to town for a noon kickoff.

Last Time Out: Valpo found itself in a halftime hole that was too large to bounce back from after Marist scored 14 points in the final 30 seconds of the first half last week in Poughkeepsie, N.Y. as the Red Foxes prevailed 35-24. A bright spot for Valpo was the play of linebacker Drew Snouffer, who shared the team lead with 11 tackles while also scoring a defensive touchdown for the second time in three weeks. He recovered a fumble and took it 50 yards for a score, highlighting a game that saw him reach the 100-tackle milestone for the third consecutive season. Griffin Norberg hauled in a 66-yard touchdown pass in the second quarter, while Deuce Larose was on the receiving end of a 2-yard score late in the game.

Following Valpo Football: This week’s game will be aired on ESPN+ (subscription available for $4.99 per month) with Todd Ickow (play-by-play) and Dave Huseman (color commentary) on the call. The game can also be heard on 95.1 FM Valparaiso. Links to live video, audio and stats can be found on ValpoAthletics.com. In addition, stay up to date with all things Valpo football by following @valpoufootball on Twitter.

Head Coach Dave Cecchini: Now in his fifth season as the program’s head coach, Cecchini has lifted Valpo football to new heights during his time in charge, turning a team that had won just three total games in the four seasons prior to his arrival - all against the same opponent - into one that finished with its first winning season since 2003 in 2017. Last year saw the program turn a corner as Valpo went 6-5 overall and 5-3 in Pioneer Football League play. Cecchini became the first Valpo coach since 2003 to earn PFL Coach of the Year honors. He was also named a finalist for the FCS Coach of the Year Award, the AFCA FCS Region 4 Coach of the Year and a finalist for the AFCA FCS National Coach of the Year. Valpo finished tied for third in the league standings after being picked to finish 10th of 11. The Valpo head coach enters this week with a 16-37 record, both overall and in four plus years on campus. Prior to arriving in Northwest Indiana, Cecchini served as offensive coordinator/quarterbacks coach at Lehigh for four years.

Series Notes: This week presents Valpo with an opportunity to avenge perhaps its most disappointing defeat of the 2017 season as Valpo succumbed to the Dolphins 20-17 on Nov. 4 in Florida, the team’s lone loss in the last five games of the year. The Valpo offense managed only three points in the second half of that contest. Valpo is 3-7 all-time against Jacksonville, but won the most recent Brown Field meeting 42-39 in the 2016 season finale.

Snouffer Hits 100: With his 11-tackle performance last week at Marist, senior linebacker Drew Snouffer is up to 106 tackles for his collegiate career. This marks the third consecutive season that Snouffer has surpassed the century mark. He finished with 102 tackles as a sophomore and 106 as a junior. Snouffer became just the second Valpo player in the last 25 years to enjoy three straight seasons with 100 tackles or more, joining Alex Green (2013-2015).

Finding the End Zone: Snouffer notched his second defensive score in a three-week span last week at Marist, recovering a fumble and returning it 50 yards for a touchdown. He joined Dilan Scargle (0 yard fumble return last season) as the only Valpo players with fumble return touchdowns since 2012, when Devan Gadson had a pair. The 50-yard fumble return for a TD was Valpo’s longest since James Riker in the PFL Championship Game on Nov. 22, 2003 against Morehead State. Riker had a 76-yard fumble recovery TD for the only first-quarter points of an eventual 54-42 Valpo win. Snouffer is the first Valpo player with two defensive TDs in the same season since Gadson in 2012 (two fumble recovery TDs) and the first with both a pick six and a fumble return for a score in the same season in over 20 years.

Valpo in Season Finales: Valpo has had good success in claiming Senior Day victories during the Dave Cecchini Era. The team has prevailed in the home finale in three of the last four seasons. Valpo topped Davidson in 2014 and Jacksonville in 2016 before finishing last year’s home slate with a win over Dayton.

About the Senior Class: Valpo will honor 29 players as part of Senior Day on Saturday. The team has 11 players who will be out of college eligibility after next week’s game at Stetson: Jean Rene, Griffin Norberg, Mike Wheeler, Drew Snouffer, Josmar Diaz-Martinez, Gowan Baldwin, Eric Rentschler, Tom Schofield, Shannon Taliaferro, Mason Sutter and Alex Ng. Two others are seniors but will play in four games or fewer this season, keeping them eligible to receive a redshirt year if they choose – Nick Turner and Jalin LeAndre. In addition, Valpo has 16 redshirt juniors on the roster, many of whom may return as fifth-year seniors next season.

Norberg Notes: Senior wide receiver Griffin Norberg is up to 16 career touchdowns (14 receiving) including a team-high seven this season. He needs two more TD grabs to enter the Top 5 in program history for touchdown receptions in a single season. In fact, he already has the most receiving TDs by a Valpo player in a single season since Tanner Kuramata had eight in 2013. Before that, the most recent player with seven or more was Ross Wiemer, who finished with 10 in 2008. Norberg is one of 41 players in Division-I FCS with seven or more TD catches this year. He’s one of eight PFL players with seven TD catches or more. In addition, Norberg is on the verge of entering the Top 10 in program history for career receiving yards. He enters Saturday’s game against Jacksonville needing just 50 yards to crack the career Top 10. He begins the day with 1,487.

Dropped Behind the Line: Mike Wheeler racked up 2.5 tackles for loss last week at Marist, marking the highest single-game total by a Valpo player this season. In fact, it marked the highest single-game total in that area for a Valpo player since Drew Snouffer also had 2.5 on Sept. 30, 2017 vs. Stetson. The last Valpo player with more than 2.5 TFL in a game was John Guilford, who had 3.5 in 2015 vs. Dayton. As a team, Valpo had eight tackles for loss, the team’s highest total this season. Over the last two weeks, Valpo has 14 TFL after having six on Oct. 27 vs. Drake. Prior to the game against the Bulldogs, Valpo hadn’t had six or more TFL in a single game since Sept. 24, 2016 vs. Davidson (nine) and has now done so back-to-back weeks.

Tacking on the Point After: After setting the single-season program record with 35 PATs last season, kicker Dimitrios Latsonas is three away from climbing into the Top 5 in program history again this season. He needs four more PATs to become the first player in program history with 30+ PATs in two different seasons.

Scouting Jacksonville: If there’s one thing that’s well known about Jacksonville, it’s this: The Dolphins can run the football. Jacksonville ranks second in the PFL in rushing offense with 343.5 yards per game on the ground (behind only Davidson) but 10th in passing offense at 44.5 yards per game. It all starts with sophomore quarterback Calvin Turner Junior, who leads the PFL in three categories – rushing (167.8 yards per game), scoring (13.0 points per game) and all-purpose (169.4 yards per game). Kicker Javier Acre-Ramirez is the only man in the PFL perfect on PATs at 30-for-30. On defense, Jacksonville has yet to get a red-zone stop as all 37 times the opposition has moved it into the red zone, it has resulted in points. Jacksonville earned its first victory of PFL play last week with a 48-44 win over Butler. Valpo and Jacksonville have had similar seasons in the sense that both teams only have one PFL win (against Butler) and both have had several other games that came down to the wire. The Dolphins had the misfortune of dropping three straight by seven points or fewer at Davidson (44-37), vs. Marist (20-17) and vs. Stetson (38-35). Head coach Ian Shields is in his third season.