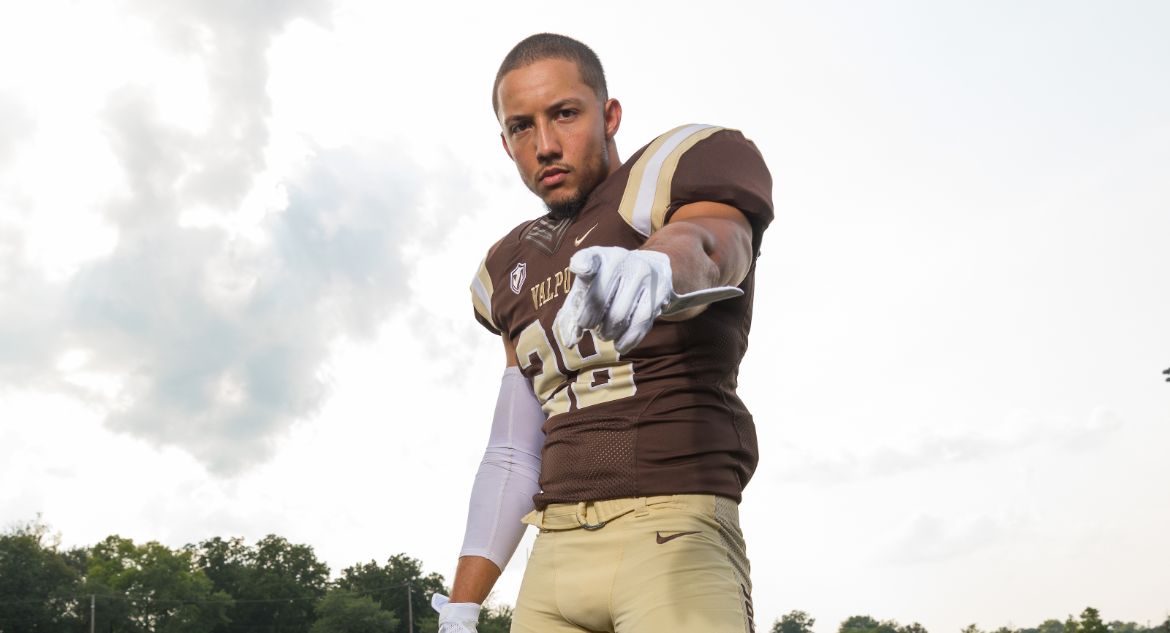 Senior Josmar Diaz-Martinez returned to the field last week after being sidelined by an injury.
Valparaiso at Stetson | November 17, 2018
Related Links
Related Links

This Week in Valpo Football: It’s one day, one game and one more time for the Valparaiso University football team. The season ends after Saturday’s visit to Stetson, which represents the last time this group will be together and the final time a number of Valpo players will ever play competitive football. It’s not about what this one means in the standings or in the record book, but instead about what this means to these players as they attempt to add one more victory to the foundation, tradition and legacy that they will leave behind.

Last Time Out: There was never much doubt about last week’s game as Valpo led from start to finish in a 48-30 victory over Jacksonville on Senior Day at Brown Field. And by “start,” we mean the very start as Griffin Norberg scored a 75-yard touchdown on a pass from Chris Duncan on the first play from scrimmage. Norberg had a stylish senior day, going off for a career-high 173 receiving yards and two touchdowns. Junior Jamari Booker forced a fumble, had an interception and finished with 11 tackles, while redshirt junior Matthew Messler accumulated a team-high 18 stops. Redshirt junior running back Elias Earley had his best day in a Valpo uniform, rushing for 75 yards and two scores on 15 carries, while Duncan tossed for 302 yards, exactly matching a career high set two weeks prior.

Following Valpo Football: This week’s game will be carried on ESPN+, which is available on a subscription basis at the cost of $4.99 per month. The game can also be heard on 95.1 FM Valparaiso with Dave Huseman (filling in for Todd Ickow) relaying the play-by-play and Spencer Krock (filling in for Brandon Vickrey) adding the color commentary this week. Links to live video, audio and stats can be found on ValpoAthletics.com. In addition, stay up to date with all things Valpo football by following @valpoufootball on Twitter.

Head Coach Dave Cecchini: Now in his fifth season as the program’s head coach, Cecchini has lifted Valpo football to new heights during his time in charge, turning a team that had won just three total games in the four seasons prior to his arrival - all against the same opponent - into one that finished with its first winning season since 2003 in 2017. Last year saw the program turn a corner as Valpo went 6-5 overall and 5-3 in Pioneer Football League play. Cecchini became the first Valpo coach since 2003 to earn PFL Coach of the Year honors. He was also named a finalist for the FCS Coach of the Year Award, the AFCA FCS Region 4 Coach of the Year and a finalist for the AFCA FCS National Coach of the Year. Valpo finished tied for third in the league standings after being picked to finish 10th of 11. The Valpo head coach enters this week with a 17-37 record, both overall and in four plus years on campus. Prior to arriving in Northwest Indiana, Cecchini served as offensive coordinator/quarterbacks coach at Lehigh for four years.

Series Notes: This will mark the fourth all-time meeting between Valpo and the Hatters with Valpo having won two of the first three. Valpo will seek its third straight head-to-head win. Each of the last two meetings have been three-point games with Valpo winning 21-18 in DeLand in 2016 and 27-24 at Brown Field in 2017. J.J. Nunes notched a game-sealing interception to secure the victory in last year’s meeting, which was the Homecoming game and PFL opener at Brown Field.

Valpo in Season Finales: Although Valpo has had good success in season finales that have come at Brown Field in recent years, winning the final game of the season when that contest falls on the road hasn’t been as easy. The only time Valpo closed the season on the road under Dave Cecchini was in 2015 at Jacksonville, a game the Dolphins won 58-13. Valpo hasn’t won a season finale on the road since 2005, a 13-7 win over Aurora. Overall, Valpo will look to close the year with a win for the third straight season and the fourth time in five years under Cecchini.

Sunshine State: Trips to Florida are always a homecoming of sorts for a number of Valpo players. This season, 13 members of the roster call Florida home, including several who will have the opportunity to play the final game of their collegiate careers in their home state.

Norberg, That’s Wonderful: The accomplishments of senior wide receiver Griffin Norberg are so numerous that they deserve their own bulleted list:

Tacking on the Point After: After setting the single-season program record with 35 PATs in 2017, kicker Dimitrios Latsonas now owns two of the top four single-season PAT marks in program history. He also became the first player in program history with two seasons of 30 or more successful extra points with his 6-for-6 showing in that category last week. Latsonas is up to 32 made PATs this season and enters the season finale three shy of equaling his own school record. He is currently fourth in program history and needs two more to move into a tie with Andrew McCawley (2003) and Eric Strasser (1999) for second.

Third One’s a Charm: Valpo enters this week seeking a season with three or more league victories for the third straight year. The last time the program registered three or more consecutive seasons of three conference wins or more was 1961-1964 in the Indiana Collegiate Conference under co-head coaches Emory Bauer and Walt Reiner. Last year’s senior class graduated with 11 PFL victories over four seasons, while this year’s class has a chance to garner its 12th PFL win on Saturday.

Snouffer Hits 100: With his 11-tackle performance on Nov. 3 at Marist, senior linebacker Drew Snouffer is up to 106 tackles for his collegiate career. This marks the third consecutive season that Snouffer has surpassed the century mark. He finished with 102 tackles as a sophomore and 106 as a junior. Snouffer became just the second Valpo player in the last 25 years to enjoy three straight seasons with 100 tackles or more, joining Alex Green (2013-2015).

Scouting Stetson: Stetson saw its impressive four-game winning streak come to an end last week with a 28-23 loss to Butler in Indianapolis. That marked just the second league defeat for a Stetson team that enters the final week of the season locked in a three-way tie for second in the Pioneer Football League standings with Drake and Marist. San Diego has outdistanced everyone with a 7-0 mark. Stetson leads the league in turnover margin at +7 and ranks third in both scoring offense (36.4) and total offense (473.2). Colby Duncan ranks fourth in the league in tackles per game at 8.2, while kicker Jonny Messina is 9-for-10 on field-goal tries. Donald Parham ranks second in the league with 132.8 receiving yards per game and leads the PFL in receptions per game at 9.1. Quarterback Colin McGovern is second only to San Diego’s Anthony Lawrence with 280.2 passing yards per game. Stetson has rebounded from a 2-9 record in 2017 and clinched its first winning season since 1950 (the program had a 57-year hiatus). Head coach Roger Hughes has been at the helm since Stetson began its rebirth seven years ago.