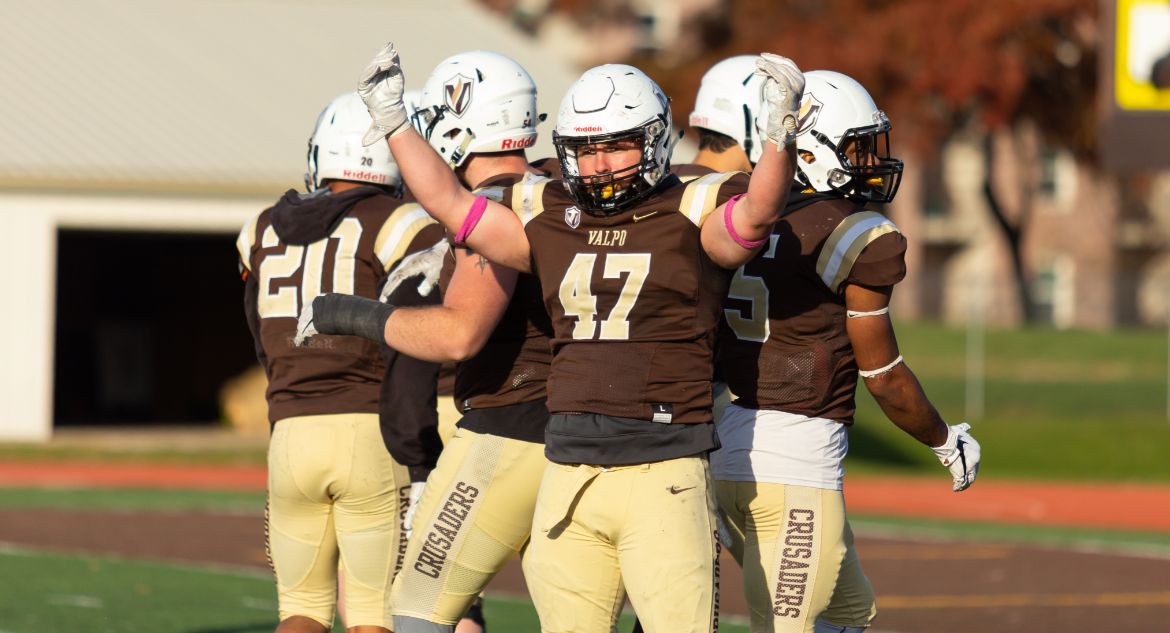 Matthew Messler led the team in tackles each of the last two weeks of the season.
Valparaiso at Stetson | November 17, 2018

A strong first half wasn’t enough for the Valparaiso University football team on Saturday afternoon in DeLand, Fla. as host Stetson rounded out its turnaround season by scoring 21 unanswered points to start the third quarter in an eventual 45-31 victory. This marked the final game of the season and the last day of the careers of a memorable group of Valpo seniors.

“I felt like we were in a great position at halftime, but I was a little worried about the conditions with the sun out and the humidity high. Our players had already played a lot of football and a lot of snaps. This was different from playing a triple option team – you don’t play as many snaps in those games as you do against Stetson. I do think that took a small toll. It wasn’t the reason we lost the football game, but we did have guys who were spent in the second half. It drained a little bit of energy when the momentum swung against us after our interception. The momentum started to snowball, and we couldn’t dig ourselves out. We struggled to stop Parham and we couldn’t make plays in man coverage on offense.”

“We played some incredible defensive football, particularly on first and second downs. Give credit to their quarterback and tight end; they made plays and a lot of times they were covered. We’ve got too many freshmen in the secondary – they’re going to be good football players, but they’re still young. When you’re an 18-year-old and you’re going up against a 22-year-old who is physically so much more mature, you’re going to get what you got today. Some of that is on injuries, and some of that is on us as coaches. We needed to do a better job protecting our secondary.”

“Last week against Jacksonville at home we saw some of our young players really starting to get their footing. We saw some of it here today, just not four quarters worth. Sometimes that’s another hallmark of a young player; you can do it, you just can’t do it consistently. Due to some injuries, we’ve got some good veterans coming back with guys like Nick Turner and Jimmy Seewald getting an extra year of eligibility. There is a ton of optimism going forward.”

“I wanted this game so badly for our seniors. They are such a fine group of young men that have battled through adversity. I was hoping we could go out on a high note after playing so well against Jacksonville and for the majority of the game today. It’s a very bright future with a lot of young players coming back. We need a great year in the weight room and it’s going to be a really spirited and very competitive year in the spring when we have 15 opportunities for spring practice. But right now I feel so bad for these seniors that are near and dear to my heart as our first full recruiting class. I love these guys and they’re a special group.”