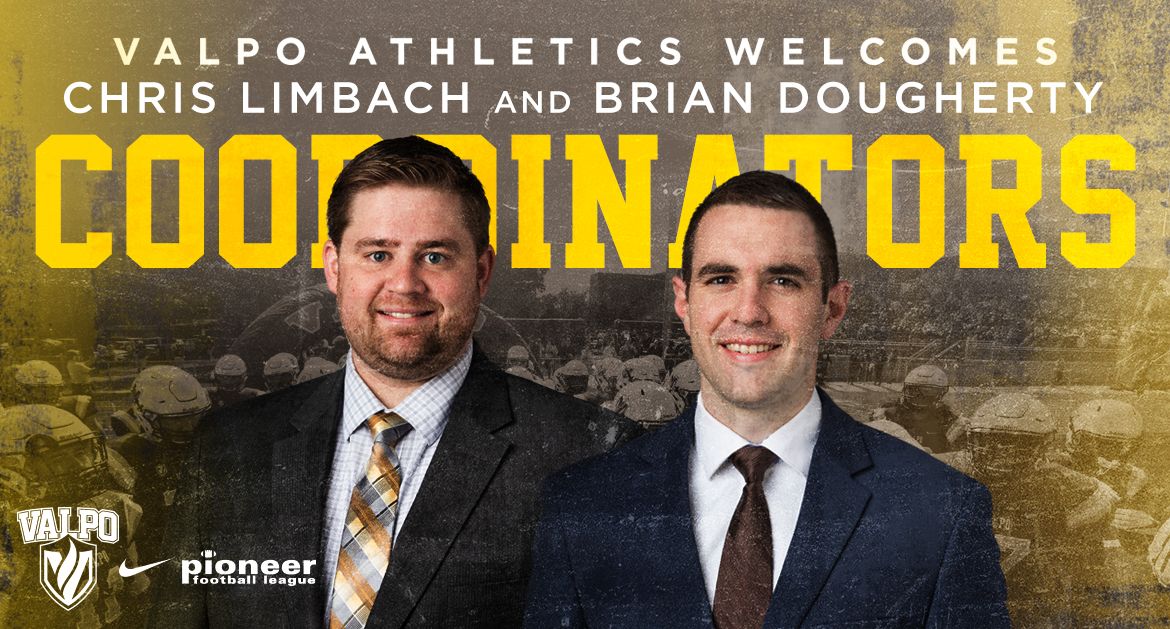 The coaching staff for Year 1 of the Landon Fox Era continued to take shape for the Valparaiso University football program on Tuesday.

Limbach comes to Valpo after a stint as the offensive coordinator, assistant head coach and quarterbacks coach at Edinboro University that began in 2016. In his first season, he helped the Fighting Scots go from 0-11 the year prior to 9-2, the biggest turnaround in NCAA Division-II history. His first Edinboro offense set a school record by scoring 40+ points in seven games including two performances of 60 points or more. The team ranked 10th nationally in scoring offense at 41.5 points per game and set school records for points scored (457), yards passing (3,789), pass attempts (549), pass completions (303), touchdown passes (42), scoring offense and total offense per game (433.2).

“Coach Limbach is a very intelligent, cerebral person,” Fox said. “He’s a thinker and he’s very organized. During the interview process, I was impressed by his approach to preparation. He has experience as a successful offensive coordinator and knows how to create systems that put players in positions to be successful. He has an understanding of how to improve a program and has been a part of teams that have made significant win increases.”

“I was attracted to Valpo because of the excitement of the new staff coming into the program and the energy of the players,” Limbach said. “During my conversations with Coach Fox, I told him that I thought my organizational and creative abilities could help bring a good brand of offensive football to this program. I’m very thankful for the people I got to work with at Edinboro. My time and experience there was very rewarding and I believe it will serve me well as I begin this new adventure at Valpo.”

Dougherty takes over as Valpo’s defensive coordinator after spending the 2018 season as the defensive backs coach at Tiffin University, where he instructed a first-team all-conference selection and two second-team all-conference honorees and contributed to the team’s 9-2 season. He was the corners coach at the University of Dayton during the 2016 and 2017 seasons when Fox was the defensive coordinator for the Flyers. Dougherty was part of a Dayton defense that held opponents to an average of 19.7 points per game over two seasons while leading the PFL in interceptions in 2016 and finishing second in 2017.

“Having worked for Coach Fox before, I know what type of leader he is and what he stands for,” Dougherty said. “The last staff here at Valpo did a nice job and you can see that this program has the potential to be very successful. I’m excited about the core values that are going to guide the way we run this program. We’re going to do it the right way and we’re going to build great relationships. From my experience at Dayton, I know Coach Fox excels at player development. You’re going to come in as a freshman and leave a better person and player after your time under Coach Fox.”

“Coach Dougherty understands our system from our time together at Dayton,” Fox said. “He knows how I want things done. Three of his greatest strengths are schemes, player relationships and recruiting. He understands how I want to run this program and recognizes the importance of communication, fundamentals and attention to detail.”

“One strength I try to bring to the table is being a high-energy coach,” Dougherty said. “I coach players hard but also understand the importance of developing relationships with them. I try to find out how each player likes to be coached and how they learn best. That information helps me put together the best plan possible for each player to be successful. Being around the players is my favorite thing about coaching.”