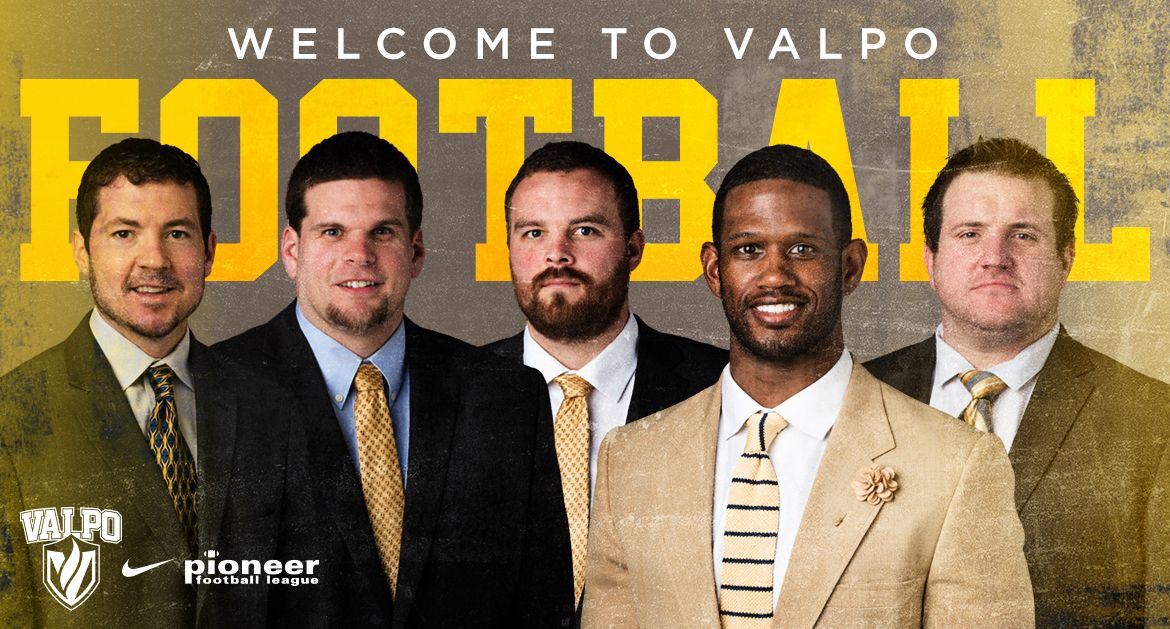 The Valparaiso University football team has continued to assemble its coaching staff as head coach Landon Fox officially announced four additions and one returnee on Friday.

Bucar will occupy the role of assistant head coach in addition to instructing the offensive line and serving as the run game coordinator for the Valpo offense. He owns a wealth of experience with notable programs including stints at the University of Pittsburgh (2009-2012, 2015-2016), Tiffin University (2013-2014), Louisiana State University (2017) and most recently Maryland (2018).

“When I interviewed Dave, it instantly became clear that he was very passionate about the game of football,” Fox said. “He’s a great teacher and technician. His attention to detail is important. He brings high-level football experience and he has participated in seven bowl games. He’s a grinder and a worker, and the players have already started to recognize his passion about offensive line play and the game of football.”

“Landon Fox is the biggest reason I initially accepted this position at Valpo,” Bucar said. “His vision and energy for the program made me want to be a part of it.”

Robinson has taken on a role as the linebackers coach and special teams coordinator at Valpo after holding those same positions at Wayne State University in Detroit since 2016. There he coached two all-conference players in 2016 and one in both 2017 and 2018 and was an instrumental part of a defense that ranked second in the GLIAC in 2016.

“I came to Valpo because I believe in Coach Fox,” Robinson said. “I believe I can bring a great special teams culture to Valpo. I was in Indiana once before and I am excited to be back in the state.”

“Jon played for me during my last season at Wayne State,” Fox said. “He was one of the hardest working players on the team and that has carried over to his time in the coaching profession. As a player, he helped turn Wayne State from a struggling team into a national runner-up. He’s a winner and I’m excited for him to make a positive impact on our program’s culture.”

Dunn has been named Valpo’s defensive line coach and run game coordinator. He comes to Northwest Indiana after a stint as the co-defensive coordinator at Wittenberg University in Springfield, Ohio that began in July 2016. The team compiled a 29-4 record in his three seasons on staff and produced the conference defensive player of the year all three seasons. His defense held opponents to an average of 19.2 points per game.

“The reason I chose to join the Valpo coaching staff is the rise of competitiveness of this program,” Dunn said. “There are some great men on this football team and I’m excited to work with them. I believe one of the strengths I bring is my ability to develop the fundamentals on the defensive line. Defensive line play is a battle every snap and we have players with significant experience returning. I am excited to work with that group.”

“Brannon is another coach who comes from a winning background,” Fox said. “I was impressed by what his team and defensive unit were able to accomplish during his time at Wittenberg. I knew him as a player, so I understand his values and what he stands for as a person.”

Before making his way to Porter County, Figaro had been the wide receivers coach at Notre Dame College in Cleveland, Ohio since the spring of 2017. He will fill that same role at Valpo.

“What first stood out to me about Valpo’s staff was the opportunity to work alongside a great coach like Coach Fox,” Figaro said. “Everyone I spoke to about Coach Fox had nothing but great things to say about him, and that excited me for the opportunity right away. We ended up having a conversation before I came up for an interview, and I already had a good feeling that the program was under a great, energetic leader. Coach Fox and I were on the same page, and once I met him in person, it solidified my thoughts on wanting to become a part of a great program and staff here at Valpo.”

“I am a high-energy coach who loves to make the game enjoyable for my players,” he said. “At the same time, I am demanding and detailed in technique and fundamentals. I was fortunate to play wide receiver at the Division I level, and I believe that has a great benefit when coaching specific techniques and ways to help my position group be successful on the field.”

Greiner is the lone returnee from the 2018 coaching staff. He will move to the offensive side of the ball to instruct tight ends in 2019, which will be his fifth season on staff. He has also coached outside linebackers and defensive backs. Greiner was on staff in 2017 as Valpo put together its first winning season since 2003.

“I am thankful for Coach Fox allowing me to remain on staff here at Valparaiso University,” Greiner said. “I believe in Coach Fox’s vision and message and it’s something I want to be a part of here. I’m excited to get back on the offensive side of the ball and learn from the great staff that has been put together. I have developed strong relationships with our players in my time at Valpo over the last four years and I want to continue to build those bonds.”

“What most impressed me about Zach is that he played for a team that lost a total of four regular season games in his four years of college,” Fox said. “He’s yet another winner on our coaching staff. He has great rapport with the players, which is a very important asset. I heard about his relationships with our current players numerous times from a variety of sources right after I was hired. He is well-liked not only among our players, but across this University.”

What They’re Saying About Coach Bucar