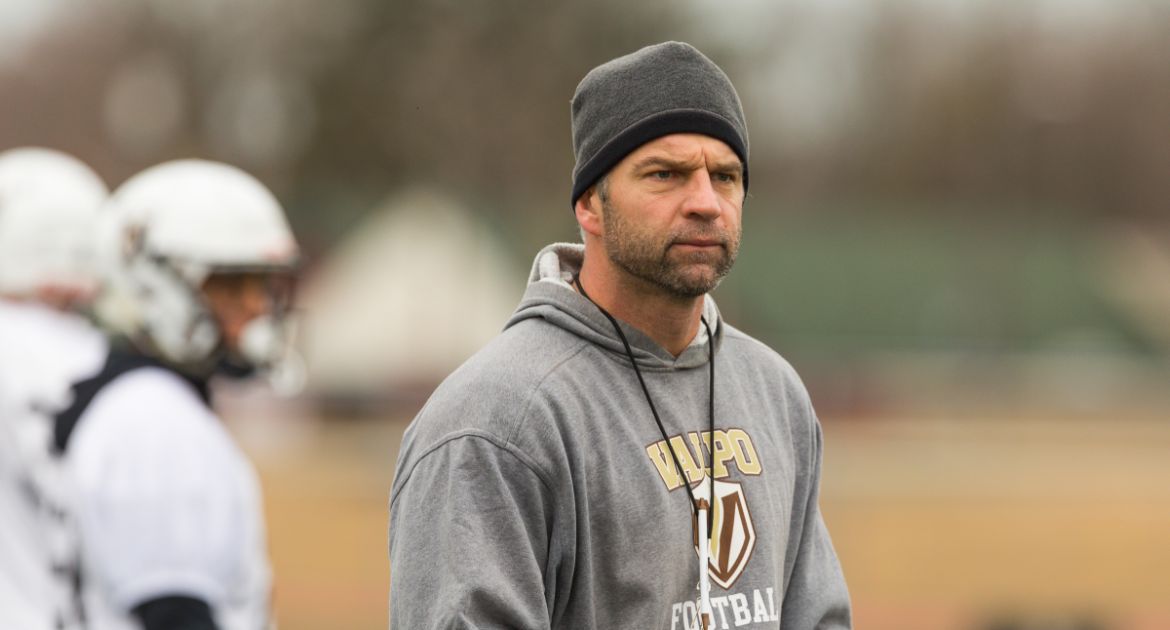 Landon Fox has announced his schedule for his first season in charge of Valpo's program.
Related Links

The Valparaiso University football team has announced its schedule for the 2019 season, the inaugural campaign under head coach Landon Fox.

The Fox Era will open on Thursday, Aug. 29 at Eastern Kentucky, a scholarship opponent from the Ohio Valley Conference that went 7-4 overall a year ago. This will mark the fifth time Valpo has played the Colonels in program history. Valpo fell to an Eastern Kentucky team that was ranked 17th nationally in the 2015 season opener. That game marked the first meeting between the two teams since 1947. This year’s season opener will be Valpo’s first Thursday night game since that 2015 game in Richmond, Ky.

The home opener will take place on Saturday, Sept. 14 against Central Connecticut State, a scholarship opponent from the Northeast Conference. The Blue Devils went 6-5 overall and 4-2 in the NEC last season. This will mark the first all-time meeting between the two teams. Valpo will play a team from the NEC for the fifth consecutive season.

After becoming a first-time opponent in 2018, Truman State is back on Valpo’s schedule in 2019. Valpo will make its first visit to Kirksville, Mo. on Sept. 21. The Bulldogs went 6-5 and 5-2 in the Great Lakes Valley Conference last season. The final nonleague game of the year will coincide with Valpo’s homecoming game on Sept. 28 as the University of Charleston comes to Brown Field. That will mark the first meeting between the two teams. The Golden Eagles were 6-5 and 6-4 in the Mountain East Conference a year ago.

Pioneer Football League play begins on Oct. 5 as Valpo visits Drake. The first PFL home game will be against Fox’s former school as the Dayton Flyers come to town on Oct. 12. Defending PFL champion San Diego is back on the schedule after a two-year hiatus as Valpo will visit the Toreros on Oct. 19.

Valpo welcomes Stetson on Oct. 26 before making its way to Davidson on Nov. 2. That will be the first time the team has visited the Wildcats since 2015. The game at Davidson will close out a season-opening stretch of nine consecutive games against teams that finished with a winning record in 2018.

Morehead State will come to Brown Field on Nov. 9, then the 78th incarnation of the Hoosier Helmet rivalry game will occur on Nov. 16 as Valpo battles Butler in Indianapolis. Marist will provide the opposition for the regular season finale on Nov. 23 at Brown Field.