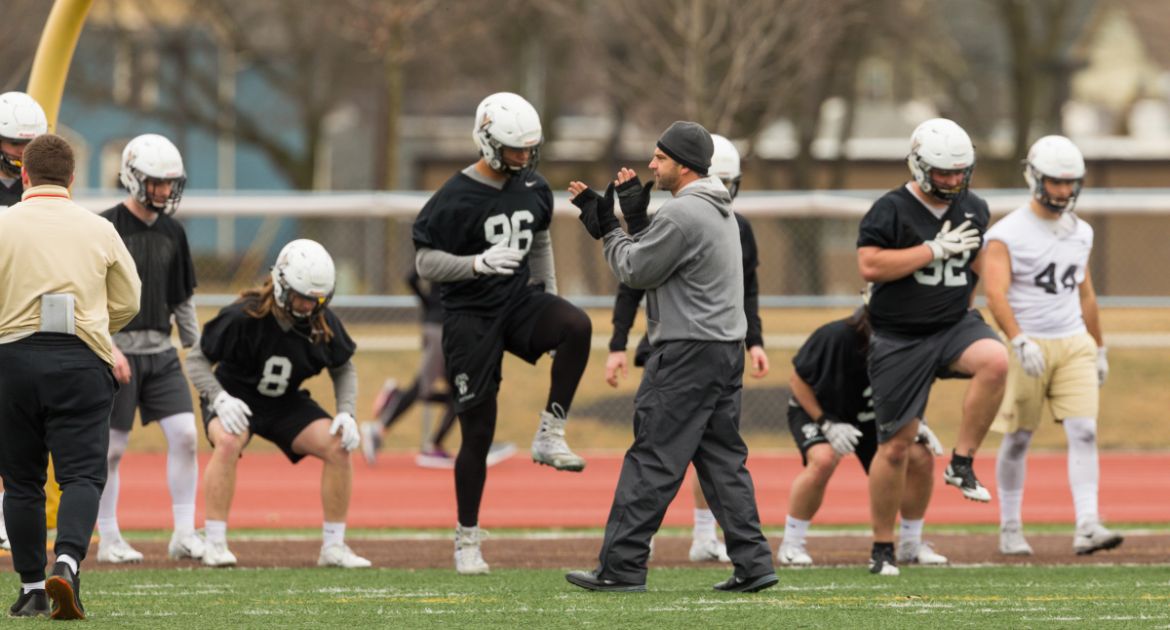 Landon Fox will coach his team in a game situation for the first time on Saturday.

The Valparaiso University football team will compete in a game environment for the first time under new head coach Landon Fox on Saturday.

The annual Brown & Gold spring game will use an offense (Gold) vs. defense and special teams (Brown) format again this season. The exact format of the game will be determined by the coaching staff this week and made available in advance of Saturday’s game, which begins at 11:30 a.m. at Brown Field. The team will begin practicing at 11 a.m. prior to the scrimmage. The event is free and open to the public.

“The spring game is our first chance to see our players in a game-like atmosphere,” Fox said. “There’s no instant feedback from play to play. For this game, it’s about us as coaches getting out of the way and allowing them to play. The players will have the opportunity to let their training take over. Nothing is going to be overly complicated offensively or defensively on Saturday, but we’ll be evaluating how consistent each player can be.”

The spring game will be the 14th of 15 spring practices with the final practice slated for Monday, April 29.

“Our players have been outstanding in terms of doing what we ask,” Fox said. “They’ve made it enjoyable by trying to meet the standards and expectations that we’ve established. By no means are we there yet, but it’s been fun for me to coach this group. The ‘want’ is there, so we’re working to improve the ‘how’ to do it.”

“Our linebacker corps has some experience,” Fox said. “We’re working to help them develop a full understanding of our scheme. It’s all about learning the system. Players are continuing to compete for positions in the secondary. We’re looking for consistency from snap to snap. We frequently talk to our players about games being 80 plays and ask them: ‘How consistently can you play at a high level?’”

On offense, Jack Jarnigan (Los Gatos, Calif. / Los Gatos) brings experience at center. Alex Kluck (Cedarburg, Wis. / Cedarburg) has shown promising glimpses at the tight end position in both the running game and the passing game this spring. Riley Allison (Fort Lauderdale, Fla. / St. Thomas Aquinas) has had a good spring at running back. At the wide receiver position, Bailey Gessinger (Napanee, Ind. / Northwood) has impressed with his speed and effort level. At quarterback, there is an ongoing competition for playing time.

After spending over a decade at Dayton and helping the Flyers to an 86-38 record in that time, Fox was hired to lead the Valpo football program on March 1. This marks his first head coaching position.

“I’m learning just like the players are,” Fox said. “The mantra of our program is taking advantage of your time by learning and growing. We’re following that mantra as coaches. We are making sure we’re organized and on the same page since it’s our first time working together. We’re learning and growing as well. It’s important for us to reflect daily on what went well and how we can continue to improve. That’s no different than our players trying to get better every day.”