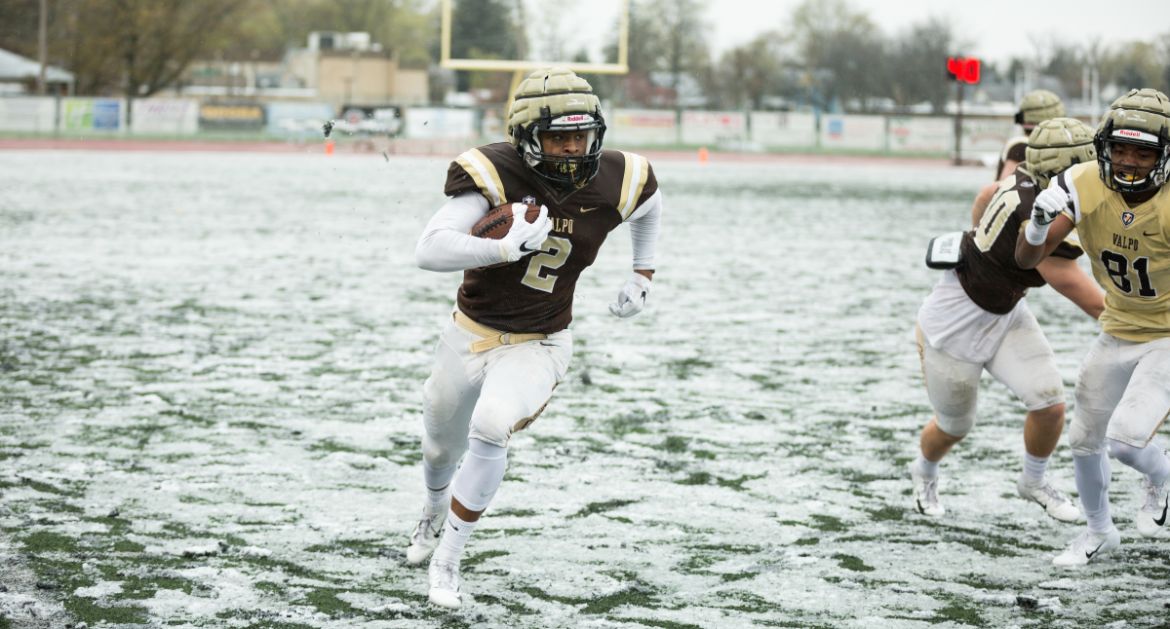 The calendar may have said late April, but the weather made it seem like late November as the Valparaiso University football team played its annual spring game on a snowy Saturday at Brown Field. This marked the first chance for the public to catch a glimpse of the team under new head coach Landon Fox.

“Our hope is that we do face some of these conditions again when we’re playing late into November and into December,” Fox said. “That’s the goal of our football program. The Pioneer Football League has an automatic bid into the FCS Playoffs. We don’t talk about it much, but the guys know that’s our goal. So hopefully we play again in this type of weather, and we’re going to be able to adapt to and overcome these situations. There are no excuses.”

The game used a scoring system that saw the defense prevail 47-28. The defense started out leading 24-0 and built the lead to 41-7 after points were awarded during pregame drills.

Jamari Booker (Kentwood, Mich. / East Kentwood) played a key role on defense early in the game, coming up with a pass breakup on fourth down to force a punt on the first series before notching a key tackle on fourth-and-1 to cause a turnover on downs on the second.

The third drive of the day saw the offense move the chains twice, once on a 14-yard pass from Joe Mullen (Elgin, Ill. / St. Edward’s [Tiffin]) to Patrick McNerney (Huntington Beach, Calif. / Crean Lutheran) and once on a seven-yard carry by Doug Haugh (Redlands, Calif. / Redlands Senior]). However, the defense came up with another stop as Stacey Jones (Wadsworth, Ill. / Warren Township) made an interception.

A fourth down pass from Nimz to Riley Allison (Fort Lauderdale, Fla. / St. Thomas Aquinas) kept the next drive alive, but it eventually resulted in a punt, allowing the defense to take a 41-14 lead into halftime. The defense continued to stand tall during the third quarter as no points were scored.

The offense had several highlights in the fourth including a five-yard TD run by Allison. Earlier in that same drive, Allison had broken open a 22-yard carry. Another fourth-quarter scoring drive featured Nimz completing a 24-yard pass to McNerney and a 19 yarder to Ollie Reese (Franklin, Tenn. / Battle Ground). That set the stage for another long pass to Reese, this one for 29 yards to the 1-yard line. Those passing plays set up Elias Earley (Land O’Lakes, Fla. / Carrollwood Day), who poked it into the end zone for a touchdown.

There were also several big defensive plays down the stretch. Jaxon Peifer (Normal, Ill. / Normal Community) scooped up a fumble and returned it 20 yards for a defensive touchdown, then Michael Scarsella (Valparaiso, Ind. / Valparaiso) and Jones each made interceptions. Jones’ second pick of the day sealed the victory for the defense.

Valpo will have its final spring practice on Monday. Fox has used the spring season as an opportunity to evaluate his team and that process will be ongoing during fall camp.

“I don’t have any idea of the depth chart at any position,” Fox said. “Everyone is at Square 1 and we will continue to evaluate on a daily basis. We want to see consistency. You might be surprised, but one thing that I was strategic about is that I haven’t watched a lot of film on our players. I didn’t want to have preconceived notions coming in. When I got here, it was a fresh start for everyone. Their first chance with me was Day 1 when we met as a team. I’m excited to continue to watch our team grow leading up to the season.”