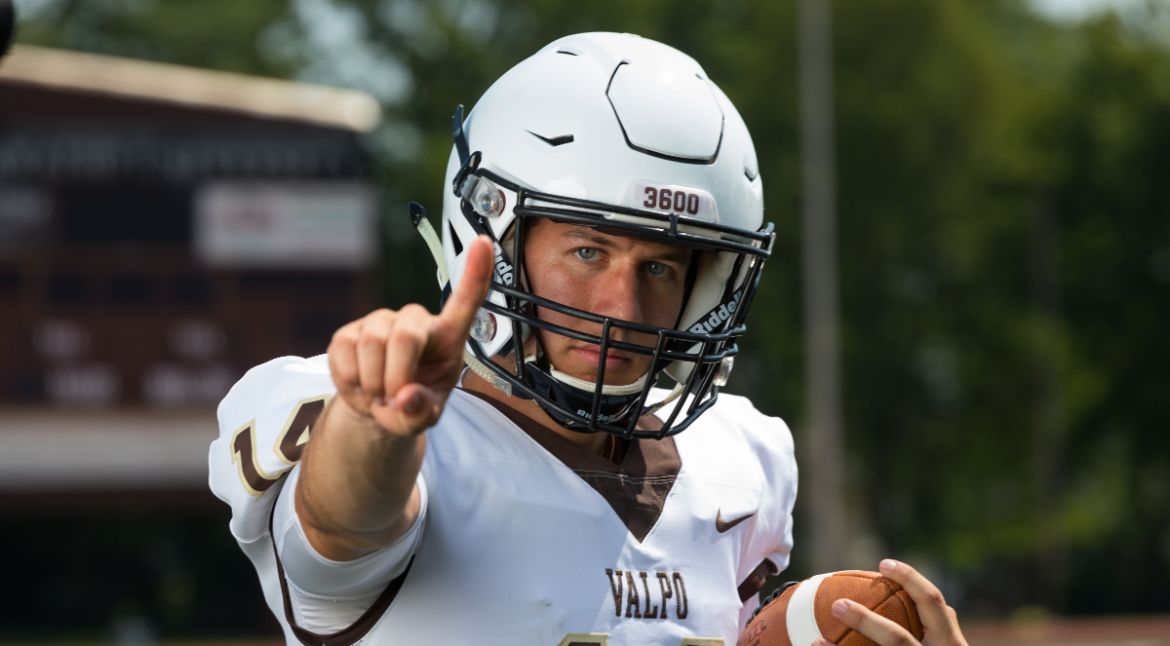 This Week in Valpo Football: After opening the season with a Thursday game then enjoying a bye in Week 2, the Valparaiso University football team will have had 15 days off between games by the time it takes the field for Saturday’s home opener against Central Connecticut. Saturday will mark the first home game under Landon Fox and will kick off the program’s 100-year celebration that will take place throughout the home slate. Pennants commemorating the centennial season will be given away to fans attending Saturday’s game.

Valpo in Home Openers: Valpo has won a home opener once since 2008, beating Trinity International 49-24 in 2016. A year ago, the first Brown Field game of the season resulted in a 34-20 loss to Truman State. Landon Fox will look to become the first Valpo head coach to win the first home game of his tenure since Bill Koch coached Valpo to a 42-0 win over Denison on Sept. 17, 1977. After kicking off the season in August for the first time since 2014, Valpo enjoyed a bye week following a Thursday opener. This marks the longest layoff between the first and second games of the season in the 100-year history of Valpo football.

Strong Slate: This week will continue a challenging 2019 schedule for the Valpo football team. This is the second game in a season-opening stretch of nine straight against teams that finished with a winning record in 2018.

Top Tackler: Jaxon Peifer has enjoyed a strong start to his sophomore season, leading the team with 10 tackles (six solos) in his first career start at Eastern Kentucky. His efforts allowed him to earn the team’s Defensive Player of the Week honor in addition to being named the Indiana National Guard Player of the Game by Valpo Athletics. One game into the season, Peifer has already exceeded his season tackle total from a year ago.

Honoring an Era: The early days of Valpo football will be in the spotlight at the home opener as the athletic department celebrates the 1919-1949 teams. George Keogan led the first team on record to a 5-3 mark in 1919. Valpo quickly elevated to a championship level of success, winning the Western Interstate Conference in 1923. J.M. Christiansen led the team to a combined 22-2 record from 1931-1933. Valpo won the Indiana Intercollegiate Conference during the 1932 season, going a perfect 7-0. The program was discontinued in 1943 and 1944 due to World War II, then Loren Ellis coached Valpo to a 6-1 mark as the team resumed play in the Indiana Intercollegiate Conference championship season of 1945. Emory G. Bauer took over in 1946 and started to build toward the most successful era in program history.

Special Guest: As part of the celebration of the 1919-1949 Valpo football seasons, the program will welcome 94-year-old lifelong Valparaiso resident Donald Findling for this week’s game against Central Connecticut. He will handle the coin toss prior to the game. He graduated from Valparaiso High School in 1943 and is a veteran, having served in World War II for three years in both Europe and Japan and achieved the rank of army staff sergeant. He was recruited by Emory Bauer and played center on the 1947 and 1948 teams before playing quarterback in 1949, a year where Valpo defeated Wittenberg 20-0 in the Lutheran Bowl in Cleveland. Findling worked for the University for much of his career and retired as chief accountant after 26 years at Valpo. As a Lions Club volunteer, he and his fellow Lions were associated with the Valpo football team for nearly 10 years in the 1970s and 1980s doing the chains. Married for nearly 60 years, he and his wife Betty had three children and two grandchildren and he remains active as a fifth-generation Valpo resident.

Following Valpo Football: All six Valpo football home games this season will be carried on ESPN+, which is available on a subscription basis at the cost of $4.99 per month. Todd Ickow (play-by-play) and Dave Huseman (color commentary) will reunite for the call of Saturday’s home opener. The game is also available on 95.1 FM Valparaiso and online via the TuneIn Radio app with Garrett Willis (play-by-play), Ben Ariano and Danny Dalenberg on the call. This season, Valpo will have separate broadcast teams for the video and radio feeds for the first time. For in-game updates, follow @valpoufootball on Twitter. Links to live video, audio and stats can be found on ValpoAthletics.com.

Series Notes: This will mark Valpo’s first matchup with Central Connecticut. However, the program is no stranger to playing NEC competition as Valpo will do so for the fifth consecutive season. Valpo has lost all four games against NEC foes over the last four years but has gotten progressively closer in each matchup. After losses to Sacred Heart in 2015 and 2016, the team fell 45-40 vs. Duquesne in 2017 and 23-21 at Duquesne in 2018.

Scouting Central Connecticut: The Blue Devils were picked to finish third in the Northeast Conference preseason poll after leading the league in scoring and yardage last season. Three offensive linemen were named to the Preseason All-NEC squad – J’Von Brown, Cole Phelps and Connor Mignore. Wide receiver Tyshaun James, defensive back Tajik Bagley and defensive back DJ Exilhomme were also preseason all-league selections. Brown was named to the Athlon FCS Preseason All-America team after earning Second Team STATS All-American honors in 2018. Central Connecticut started the season with a 26-23 victory at Fordham behind a last-second field goal by Francis Cole. They followed that with another three-point win, beating Merrimack 40-37 in Week 2. Cole hit a game-winning field goal for the second time in as many weeks, this time a 44 yarder to snap a 37-37 tie with three seconds remaining. The Blue Devils went 6-5 overall and 4-2 in the Patriot League last season.