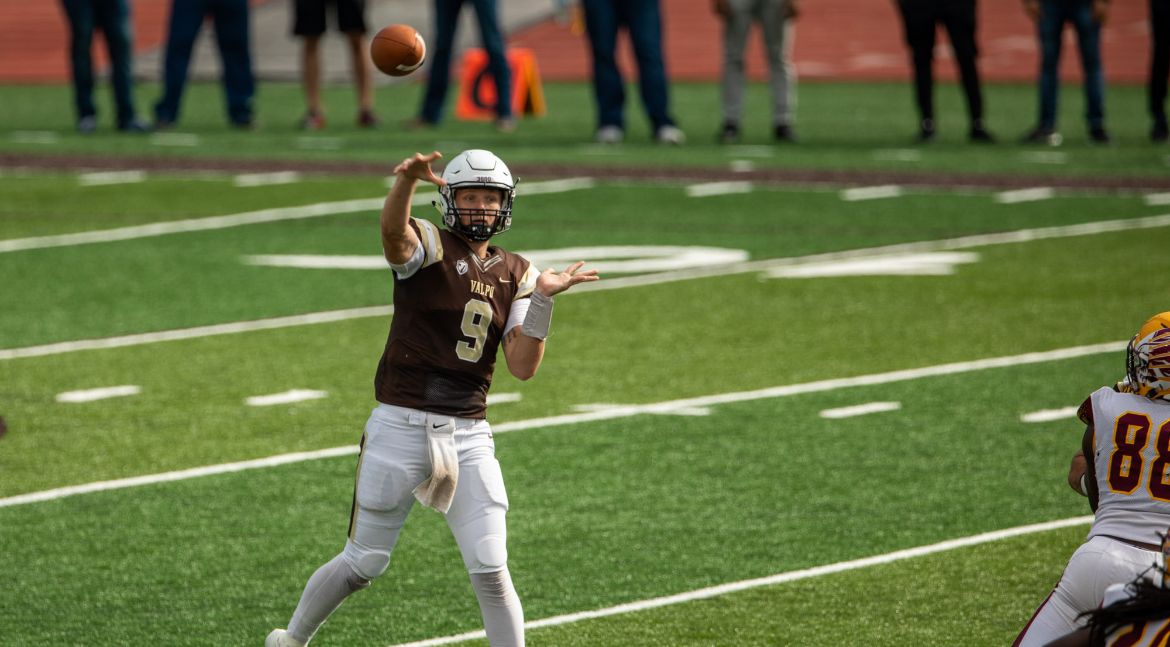 Jimmy Seewald made his first start of the season at quarterback on Saturday.
Charleston at Valparaiso | September 28, 2019
Related Links
Related Links

Each team had a touchdown in the first 10 minutes, but it was all field goals from then on out on Saturday afternoon at Brown Field. Charleston produced four field goals to Valpo’s two, accounting for a 19-13 win for the Golden Eagles on Homecoming Saturday at Valparaiso University. The Valpo defense forced three first-half turnovers to highlight the day for the hosts.

“Just like I told the guys in the locker room, I thought we let one slip away in terms of our ability to win the game. We need to do a better job of being more efficient on offense. That doesn’t mean we need to score a bunch of points, but we need to find ways to move the chains.”

“We have to be more consistent on special teams. We had a successful fake punt against us, we stepped out of bounds on a kickoff return, and you can’t have those mistakes and win a football game against a good team. Charleston is a talented team that came in with a 2-1 record, so we needed to execute better to beat them.”

“Defensively, I thought we executed. We were pretty efficient, but we’ll have to go back and take a look at the film. Our goal is to get better every day in all aspects of the game leading into PFL play next week.”

Valpo (0-4) will begin Pioneer Football League play next week by visiting Drake on Saturday at 1 p.m. in Des Moines. The game will be broadcast on Bulldog Vision and on WVUR 95.1 FM Valparaiso, which is also available via the TuneIn Radio App. Links to live video, audio and stats will be available.