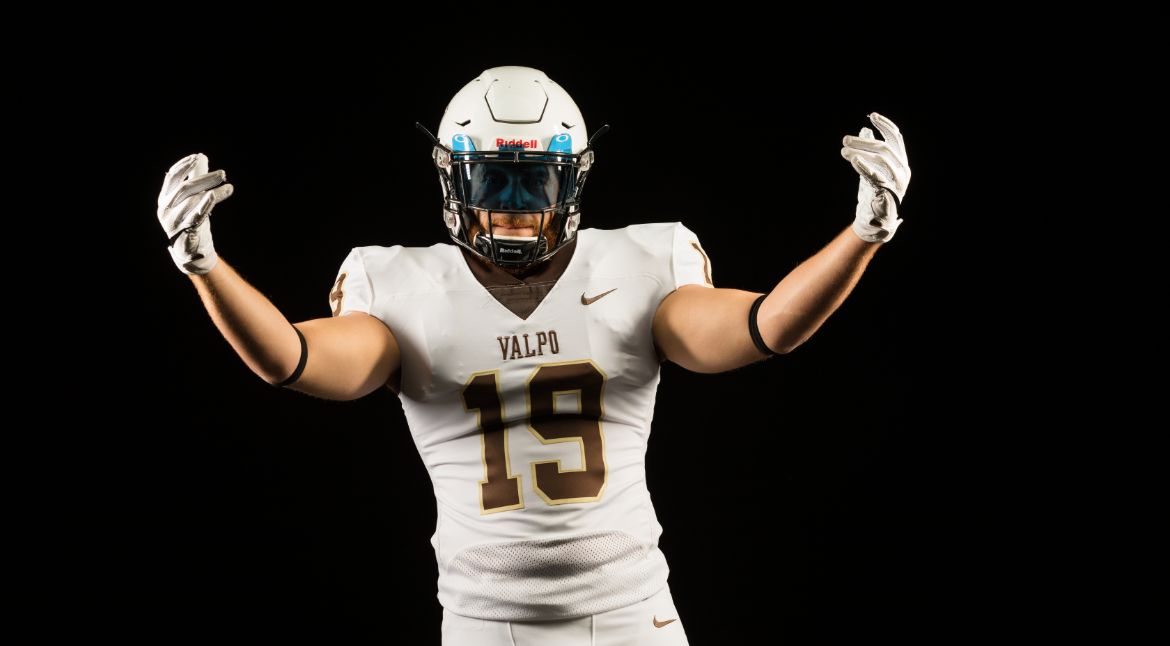 This Week in Valpo Football: Now the games really start counting for the Valparaiso University football team. The Brown & Gold will be thrown right into the fire in Pioneer Football League play to begin head coach Landon Fox’s first season as the squad faces the top three teams in the PFL Preseason Poll over the first three weeks of league action, including two road dates. That gauntlet starts with a trip to Drake, which has long proved to be a tough place to play for Valpo football.

Previously: Valpo incurred a 19-13 setback to the University of Charleston in the nonconference finale last week at Brown Field. The two teams exchanged early touchdowns with Valpo’s coming on a 3-yard pass from Jimmy Seewald to Alex Kluck. But from the midway mark of the first quarter forward, it was all field goals with the Golden Eagles converting four to Valpo’s two. Valpo’s defense came up with big plays throughout the day as Jamari Booker snatched two interceptions and Nick Turner forced a fumble and scooped up the recovery.

Turner Time: Fifth-year senior Nick Turner finished as the team’s leading tackler last week against Charleston, coming within one tackle of his career-high of 13 that was set during the 2017 Homecoming game against Stetson and matched on Nov. 11, 2017 in a win over Butler. The captain crossed the 200-tackle mark for his collegiate career as he now stands at 205, Valpo’s active leader in career tackles. In addition, Turner had a forced fumble and a fumble recovery against the Golden Eagles, the second of each in his career. His first forced fumble came on Nov. 18, 2017 vs. Dayton and his first fumble recovery was on Oct. 7, 2017 at Campbell. Valpo has had four different leading tacklers in the first four games of the season.

Seewald Returns: After playing late in the second half of the Sept. 21 game at Truman State, Jimmy Seewald made his first start of the season on Sept. 28 vs. University of Charleston. Seewald, who holds nearly as many career wins as every other Valpo quarterback for the last decade combined, was the starting signal caller during the team’s 6-5 season in 2017 before being limited to four games by an injury in 2018. Seewald has passed for 4,616 yards in his career, needing 384 more to become just the fifth player in program history to reach 5,000 career passing yards. He has thrown 36 career touchdown passes, the most since Eric Hoffman (2010-2013) finished with 44. Perhaps most importantly, Seewald has the best career winning percentage of any Valpo quarterback in over 15 years.

Flag Free Football: Valpo ranks among the national leaders in avoiding penalties, as the team’s 4.50 penalty per game average is the best in the Pioneer Football League and 10th in the FCS nation. The national leader is Lehigh at 2.50 penalties per contest.

Following Valpo Football: A video stream will be available for Saturday’s game on Bulldog Vision courtesy of Drake Athletics. The hometown call will be available on 95.1 FM Valparaiso and via the TuneIn Radio app with Todd Ickow (play-by-play) and Brandon Vickrey (color commentary) describing the action. Links to live video, audio and stats are available on ValpoAthletics.com.

Scouting Drake: The Bulldogs are coming off a one-sided 41-17 win over Marist to open PFL play. The team went 0-3 in nonconference action, but two of the losses were against high-level competition to North Dakota (47-7) and No. 3 South Dakota State (38-10). Valpo and Drake do have one common opponent as both lost to Truman State, with Drake’s defeat coming 10-7 in Des Moines. Freshman quarterback Ian Corwin was named the STATS FCS Freshman Player of the Week after going 20-of-29 for 255 yards and four touchdowns against the Red Foxes. Four different Drake receivers hauled in touchdown grabs in the game. He has thrown seven touchdown passes in the last four games. Junior defensive back Jeran Proctor is the reigning Pioneer Football League Player of the Week after making a key interception in Saturday’s win at Marist. Alex Rogers leads the Drake defense with 29 tackles. Devin Cates has 20 receptions for 254 yards and two touchdowns, while Corwin is 63-of-117 through the air this season. The leading rusher is Drew Lauer, who has 266 yards on the ground through four games. Drake, which was picked third in the PFL, had four preseason all-league honorees – WR Steven Doran, DL Gavin Dineen, DL Erin Morgan and DB Will Warner. Saturday’s game will be a battle of first-year head coaches who have previously served as defensive coordinators in the league. Todd Stepsis was elevated to head coach on Dec. 21, 2018 after five seasons in charge of the defense in Des Moines.

Valpo in PFL Openers: Valpo has lost the PFL opener each of the last two seasons, opening up at home against Davidson in 2018 after visiting Drake in 2017. The team did notch a home win over Davidson in 2016 to crank up league action, their only victory in the last five PFL openers. Valpo is 2-10 in its last dozen PFL lid-lifters with the other victory coming on Sept. 28, 2013, a 49-42 overtime win over Campbell at Brown Field.

Strong Slate: This week will continue a challenging 2019 schedule for the Valpo football team. This is the fifth game in a season-opening stretch of nine straight against teams that finished with a winning record in 2018.