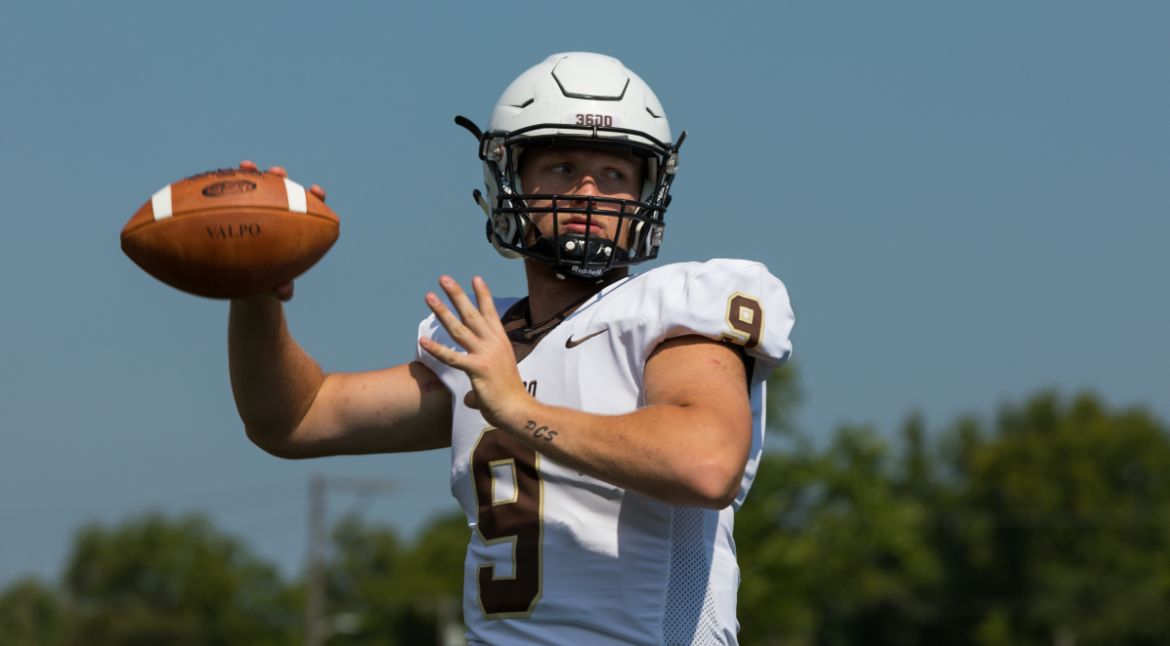 This Week in Valpo Football: When Valparaiso University football coach Landon Fox glances at the visiting sideline on Saturday afternoon at Brown Field, he’ll see old friends turned new foes. After spending the last 11 seasons on staff at the University of Dayton, Fox is in his first year at the helm of the Valpo football program. This week, his former players and Dayton colleagues will provide the opposition as he attempts to garner his first victory as a head coach.

Previously: Valpo racked up 12 tackles for loss and knocked in a pair of field goals from over 40 yards out, but the offense was held to 131 yards in a 35-6 setback to Drake to open the Pioneer Football League slate. Nick Turner had a team-best 10 tackles including 3.5 TFL and a sack, while kicker Dimitrios Latsonas converted field goals from 46 and 41. Neither team scored in the opening quarter, but the Bulldogs posted 21 points in the second and tacked on 14 in the third.

Turner Tackle Tidbits: Valpo fifth-year senior Nick Turner has led the team in tackles each of the last two weeks, most recently wrapping up 10 tackles including nine solos in last week’s game against Drake. He became the first Valpo player with 3.5 TFL in a single game since John Guilford on Oct. 17, 2015 vs. Dayton. He equaled the most by a Valpo player since Guilford’s 4.0 on Nov. 8, 2014 vs. Butler. Turner also became just the third PFL player with 3.5 or more TFL in a game this season, joining San Diego’s Kevin Glajchen (4.0 vs. Harvard) and Morehead State’s Vaughn Taylor (3.5 vs. Union). Turner is up to 7.0 TFL for the season, tied with Davidson’s Bryce Perry-Martin for the league lead.

Back on Track: After missing his first four field goal attempts of the season, senior kicker Dimitrios Latsonas has returned to the form that Valpo fans have come to expect throughout his career. He has gone 4-for-4 on field-goal tries over the last two weeks, with two of his three makes coming from 40 yards or longer, including conversions from 46 and 41 in the team’s most recent game on Oct. 5 at Drake. He is 6-for-8 (.750) in his career in tries from 40 yards or longer, a higher success rate than his kicks from shorter than 40 yards (18-for-28, .643), albeit a smaller sample size. Latsonas has 24 made field goals and 79 PATs in his career, putting him five extra points away from tying the program career record.

Following Valpo Football: Like all Valpo home games this season, Saturday’s showdown will air on ESPN+. Todd Ickow (play-by-play) and Brian Jennings (color commentary) will comprise the broadcast team this week. In addition, the game can be heard on 95.1 FM Valparaiso WVUR via the TuneIn Radio app. Links to live video, audio and stats are available on ValpoAthletics.com.

Series Notes: Valpo will attempt to improve on its 3-25 record in an all-time series that goes back to 1988. The team fell 53-20 last season in Dayton, but the most recent Brown Field meeting was a memorable victory. Valpo used a go-ahead two-point conversion to beat Dayton 8-7 in the 2017 season finale, in the process clinching the team’s first winning season since 2003 and sending the Flyers to their second losing campaign in a 41-year span. Senior Jarrett Morgan plunged into the end zone from 1-yard out to make it 7-6 Dayton with 1:20 to go, then Morgan – a running back – threw a jump pass to senior quarterback-turned-tight-end Ryan Clarke, who hauled it in to put Valpo up 8-7. That win snapped a 13-game head-to-head skid that dated back to 2003. This matchup has occurred every year since 1993.

Scouting Dayton: Dayton has won 12 Pioneer Football League championships, winning its most recent title in 2015. The Flyers are under the direction of Rick Chamberlin, who is in his 13th season as head coach and 45th at Dayton as a player, assistant coach and head coach. The team opened the season with a 42-35 win over No. 14 Indiana State, the highest-ranked FCS opponent in program history. They followed that with another impressive road win against a scholarship foe, beating Robert Morris 34-31. The only loss of the season for Dayton came 35-31 to Duquesne on Sept. 21 before the team opened the PFL slate by downing Jacksonville 56-28 last week. The Flyers rank second in the league in scoring offense at 40.8 points per game and lead the PFL in both pass defense (165.2) and pass efficiency (184.7). The team’s +3 turnover margin is also the best in the league. Senior Sean Prophit is fourth in the league in rushing at 86.2 yards per game, while sophomore quarterback Jack Cook is third in passing at 226.5 yards per game. Cook is the league leader in pass efficiency at 184.7 yards per contest, while Adam Trautman leads the league in receptions per game with 7.8 and receiving yards per outing at 102.5. The team also boasts two of the top three tacklers in the league in Brandon Easterling (14.8) and Tim Simon (9.2). The Flyers were picked second in the PFL Preseason Poll with three preseason all-league picks – TE Adam Trautman, OL Michael Niese and LB Andrew Lutgens.

Two-Pick Showing: Jamari Booker grabbed a pair of interceptions in the Sept. 28 game against Charleston, becoming the first player in the Pioneer Football League with a multi-interception game this season. At that point in the year, he was one of 26 players in the FCS nation with a multi-interception game in 2019. The last Valpo player to pull down multiple picks in a single game was Austin Petrie on Oct. 28, 2017 vs. Morehead State. Valpo has had five players with multi-interception games in the last five seasons – Josmar Diaz-Martinez (2015), Kellan Hughes (2015), Drew Snouffer (2016), Petrie and Booker. In addition to lifting his career interception total to five, Booker boosted his season tackle output to 20 in the game against Charleston.

Flag Free Football: Valpo ranks among the national leaders in avoiding penalties, as the team’s 4.40 penalty per game average is the best in the Pioneer Football League and 10th in the FCS nation. The national leader is Delaware at 2.60 penalties per contest.