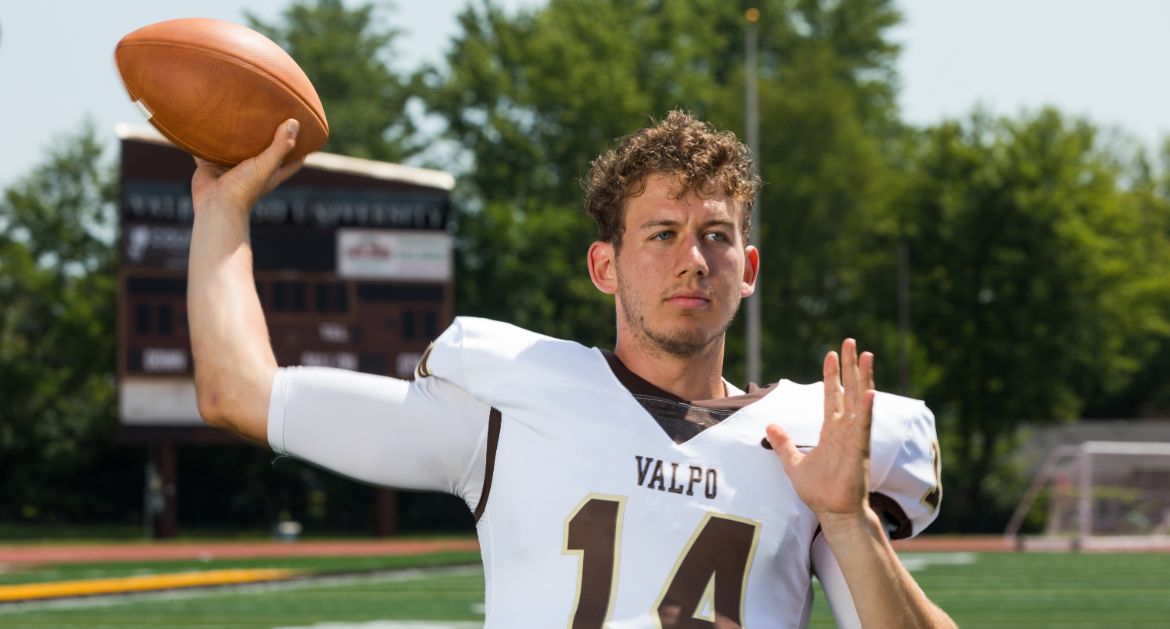 Chris Duncan is one of four 2020 Valpo Football captains.

Four members of the Valparaiso University football program have been named team captains for the 2020 season, as announced by head coach Landon Fox on Sunday.

The team captains are traditionally announced during the spring football game, so Fox made the announcement via Twitter on Sunday, which would have been the date of the annual Brown & Gold exhibition. The program had eight leadership sessions during the spring, helping student-athletes develop their leadership skills.

“For us as coaches, it’s about more than just football,” Fox said. “We’re trying to develop young men. In the words ‘team captain,’ the team comes first. When I called our captains on Sunday, I let them know that they now have 109 players who they will have to put ahead of themselves. I’m excited to see them develop leadership skills that they will use throughout their lives.”

Duncan will be among the program’s longest-tenured members in 2020 as he returns as a fifth-year senior. The Valpo veteran already ranks eighth in program history in career passing yards with 3,725 and seventh in total offense at 4,374.

“Chris’ desire to come back as a fifth-year senior says a lot about his commitment to our program,” Fox said. “Playing time was hit or miss early in his career at the quarterback position, and last year he became our starter and put us in position to win games late in the season. What stands out most about Chris is that he is a very positive person who is always going to look at the bright side. He is going to rally our team in a positive manner.”

Skarecky accrued 32 tackles over 10 games during his junior season while compiling five tackles for loss to go along with a sack, a blocked kick and a fumble recovery. He played in all 22 games over his first two collegiate campaigns in 2017 and 2018.

“Laddie is the passionate one,” Fox said. He’s going to do whatever he needs to do in order for Valpo Football to have success. You can see the way he approaches practice and workouts that his desire for this to be a championship program comes first and foremost. He brings a lot of excitement, energy and passion to everything he does, and that garners him a lot of respect from his teammates. He goes above and beyond to make sure everyone feels welcome and everybody feels like they’re making an impact on Valpo Football.”

Vas has been a fixture on Valpo’s offensive line, playing in 32 games through his first three collegiate seasons. He earned a starting position and made 11 appearances during the 2019 campaign.

“Sam is our toughness guy,” Fox said. “The level of toughness he brings is a considerable asset to our offensive line and our football team as a whole. He is a demanding, physical player who does a good job making sure that everyone feels like part of the team. He does whatever it takes for the team to be successful.”

After redshirting in 2017, Haugh has played in all 23 games over the last two seasons. He has seen time at both running back and long snapper.

“The long snapper position can be a stressful one, but Doug is always comfortable and at ease,” Fox said. “That sums up who he is as a person and player. He is calm under pressure and has tremendous concentration. He brings a very level-headed approach and Doug’s teammates appreciate how steady he is day in and day out.”