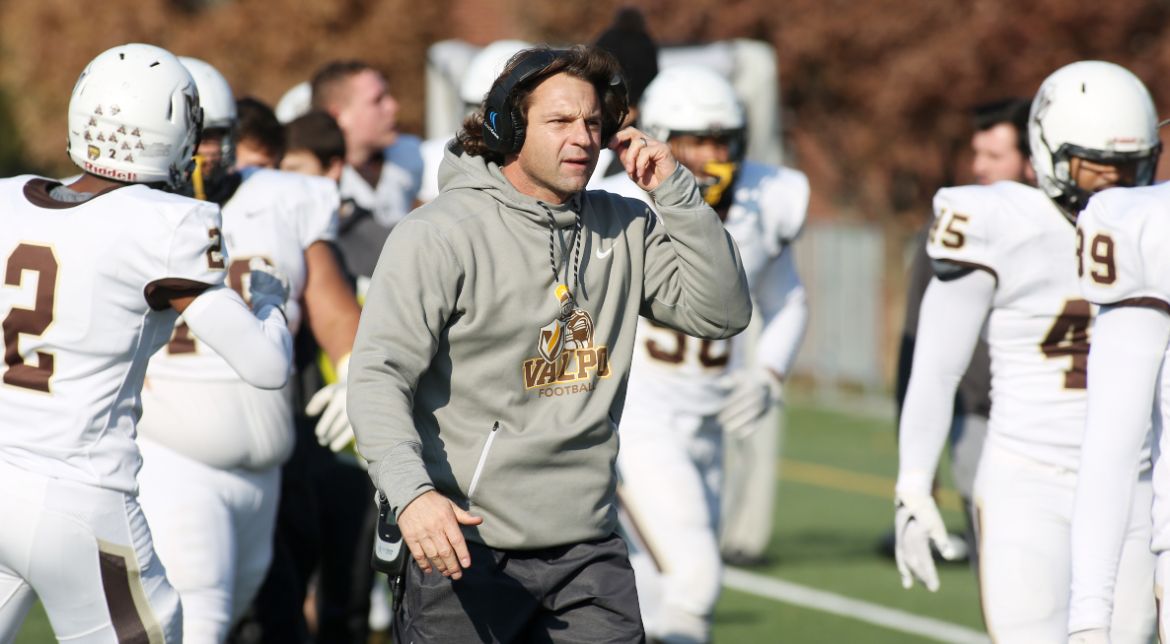 “As always, we are looking for excellent students as well as very good football players,” Fox said. “As a staff, we take our time getting to know the recruits on a personal level and building relationships with them. Above all, we’re recruiting good people, because that’s how any organization achieves success.”

A 6-foot-1, 250-pound defensive lineman, Trojanek was a four-year varsity letter winner in high school, earning all-conference and second-team all-area honors. He led his team to a 7-4 mark and state semifinal appearance in 2020. His top individual performance came against Huntley High School, when he notched 2.5 sacks, five tackles for loss and seven tackles.

Trojanek, who also competed in three years of prep track & field, was a captain in both sports. His success extended to the classroom, where he was an AP Scholar with honors, a regional science fair qualifier and a member of National Honor Society. Trojanek has several relatives who have competed in collegiate athletics including an uncle who pitched for the baseball team at Parkland College, a cousin who plays softball at Taylor University and cousins who have played or will play volleyball at Wisconsin Whitewater, Texas Tech, Central Michigan and Purdue Northwest.

“Defensive tackle was an area of focus because we wanted to continue to create and build talent and depth within that position group,” Fox said. “George is a player with a high motor who has the ability to make plays and be very productive at that position.”

A 6-foot-3, 220-pound defensive end, Kobs was a two-year starter and three-year letter winner at Creighton Prep. He helped his team to a 6-3 record as a senior, including a 12-tackle, one-sack, two-TFL performance against Lincoln Southeast. He also played two years of high school basketball.

Away from the gridiron, Kobs enjoys reading, playing with dogs and learning about nice cars. He has a standard poodle named Roxy. In the classroom, Kobs earned second academic honors as a junior. His father Brian played four years of college basketball at Hastings College, while his uncle Kevin played four years of basketball at Wayne State and his sister Sydney is a swimmer at Occidental College.

“Max is a big skill player who plays outside linebacker and can do multiple things on the offensive and defensive sides of the ball,” Fox said. “We recruited him to play defensive end, but he also provides versatility. We always look for players with length who can run. We’ll find a position for someone with those attributes.”

A 5-foot-10, 170-pound defensive back, Graves was a three-year varsity letter winner and earned second-team all-league honors at free safety. In addition, he was an honorable mention all-league choice on offense at the slot receiver position. His top performance featured a punt return touchdown, safety, nine tackles and two TFLs in a single game. Graves excelled as a three-sport athlete, playing four years of basketball and three years of soccer in addition to his prowess on the gridiron. An honor roll member all four years of high school, Graves works as a lifeguard in his spare time.

“Colin is a good skill player who can play offense or defense,” Fox said. “We recruited him to play safety, and he has the ability to make some plays. He was our first commitment of this class. He plays both sides of the ball and has the ability to make plays on offense and defense. He’s also involved in the kickoff and kickoff return phases of the game.”

A 6-foot-1, 245-pound defensive tackle, Boley was a four-year letter winner at South Warren, where he achieved academic all-state and first-team defensive all-conference honors. He also competed in three years of track & field. A dean’s list honoree in the classroom, Boley enjoys music, dancing, video games, exercising and caring for animals. He intends to major in electronical engineering.

“Julian is an explosive athlete,” Fox said. “He’s disruptive inside. He is going to be a force in the run game and the pass game. He’s very versatile for a defensive tackle, and we’re excited to have him join our program.”

A 6-foot-1, 210-pound linebacker, Birmingham served as a three-year captain at Oak Park and River Forest High School. His top single-game performance came against Lyons Township, when he recorded 8.5 tackles and 1.5 sacks. Birmingham also competed in basketball as a freshman and sophomore. A dean’s list honoree all four years of high school, Birmingham enjoys working out, watching YouTube podcasts and cooking in his spare time. He intends to pursue business or engineering at Valpo.

“Jake is a sideline-to-sideline linebacker who gets to the point of attack,” Fox said. “He’s physical and will be a great asset for our program. He’s a good tackler and a very productive player.”

A 6-foot, 210-pound middle linebacker, Davison was a three-year letter winner at Robbinsdale Cooper, where he earned all-area honorable mention and all-district honorable mention while helping his team to a 4-3 mark. During his senior season in 2020, he enjoyed an 11-tackle performance at Waconia while also notching two TFLs and a sack. Davison has also competed in prep wrestling and track & field.

Davison also thrives academically, where he is a member of National Honor Society, Honor Roll and International Baccalaureate. He was featured on the news for competing in a robotics competition alongside two teammates. Davison, who plans to pursue a degree in Valpo’s nationally-ranked College of Engineering, also enjoys working out, anime, video games, jet skiing, social justice initiatives and roller coasters.

“Ayden has the opportunity to excel in the pass game with his ability to cover opponents and get from sideline to sideline,” Fox said. “He plays with a lot of energy; that’s what stands out to us on film. Ayden is very passionate about the game of football.”

The Valpo football staff will continue its recruiting efforts and will announce additional signees when the next signing period beings on Feb. 3.